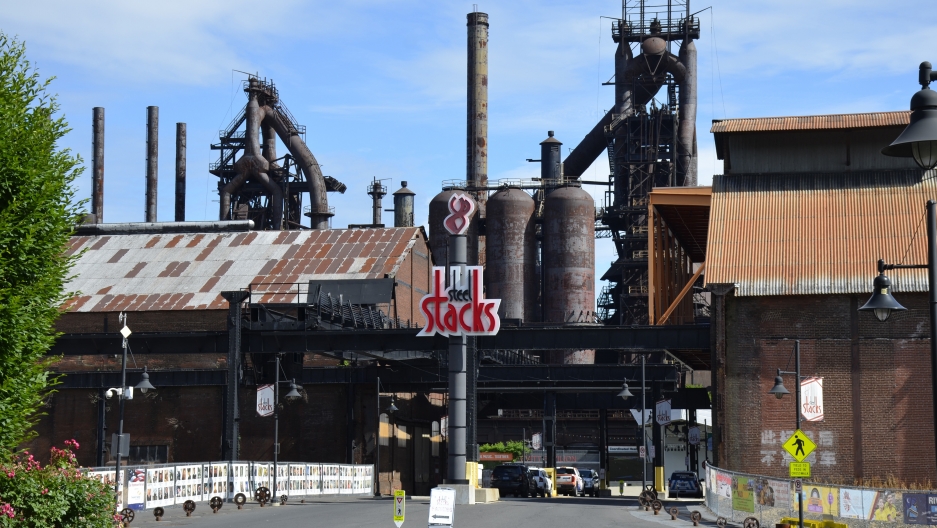 A new “SteelStacks” sign adorns the old Bethlehem Steel Corp. blast furnaces. Behind the sign is a sparkling new complex with restaurants, a movie theatre and a large concert venue.

How does an industrial city reinvent itself when its main industry disappears? That’s a problem that dozens of American cities have confronted over the past generation.

Consider Bethlehem, Pennsylvania, population 75,000. The city was once synonymous with the company Bethlehem Steel Corp. Iron and steel had been produced in Bethlehem since just before the Civil War.

“It was hot, dirty, dangerous, smelly, loud, obtrusive,” said Bruce Ward, who spent 27 years working in the Bethlehem Steel mill. “There were trains and overhead cranes and equipment moving all around you, all the time. And if you could keep yourself safe, that was the big challenge of the day, every day.”

Back in the heyday of the 1960s, Bethlehem Steel employed 31,000 people; 75,000 lived in the city. Think about that: that’s 40 percent of the city’s population (although not all the workers lived in Bethlehem, of course). But foreign competition, rising labor costs, advances in manufacturing and lower demand for steel all took their toll. The last workers in Bethlehem were sent home in the mid-1990s.

The transition was made tougher because the steelworkers also lost half their pensions when the company went bankrupt.

Ward, who was approaching 50, retooled himself as a photographer, videographer and magician.

He showed me an impressive magic trick with a rubber band, doing the seemingly impossible — melting one rubber band through the center of another.

Ward now spends his days in an artist’s studio rather than a blast furnace. He’s grateful for that. But he said it has been “pretty rough” financially. He used to make a comfortable middle-class salary working in the mill. Now, he describes his financial situation like this: “You’ve heard the term, 'starving artist?'” 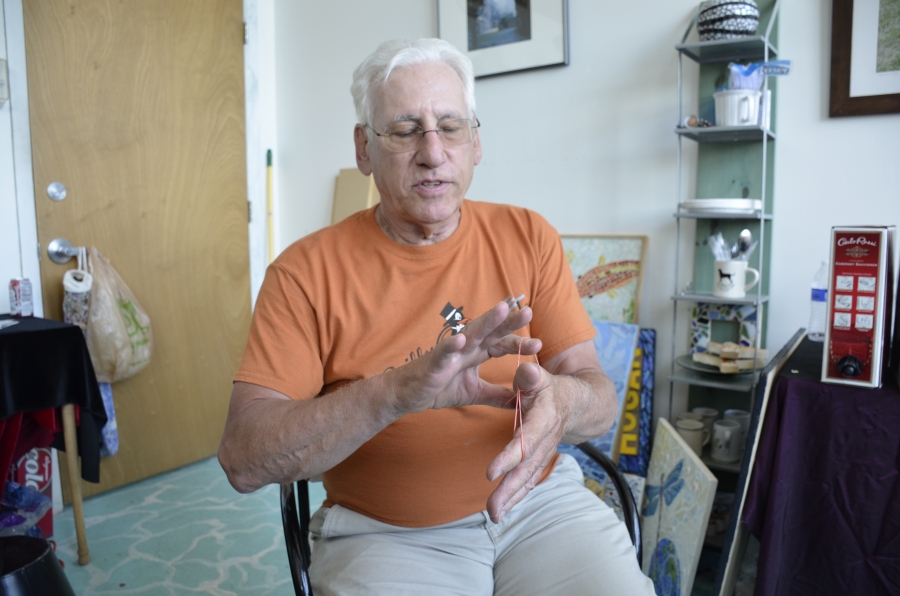 Bruce Ward performs a magic trick with rubber bands. The former steelworker has reinvented himself with a number of jobs — including as a photographer, videographer and magician — since being laid off from the mill in Bethlehem two decades ago.

Ward’s reinvention is not unlike the city of Bethlehem itself. The old steel mill has been repurposed as “SteelStacks,” a sparkling new entertainment venue for huge outdoor concerts, films and comedy shows built behind the industrial pipes and furnaces. The entrance is striking.

“When people come to SteelStacks for the first time, what they see are five towering Gothic blast furnaces that have been rusting since they ceased operations in 1995,” said Kassie Hilgert, the CEO of ArtsQuest, a nonprofit which runs provides access to arts and culture, including SteelStacks. “When people first get here, it is like that first trip to New York where you spend most of the time with your neck craned skyward figuring out: What happened here?”

“And why would you want to keep a visible reminder that you failed every single day? So we were early proponents of tearing everything down and starting over. But we went to northern Germany, and in northern Germany, they've turned these historic steel plants into cultural districts and real attractions. That was our aha! moment, to come back and say, 'We’ve got a better idea to honor our past, but use arts and culture as our way forward.'” 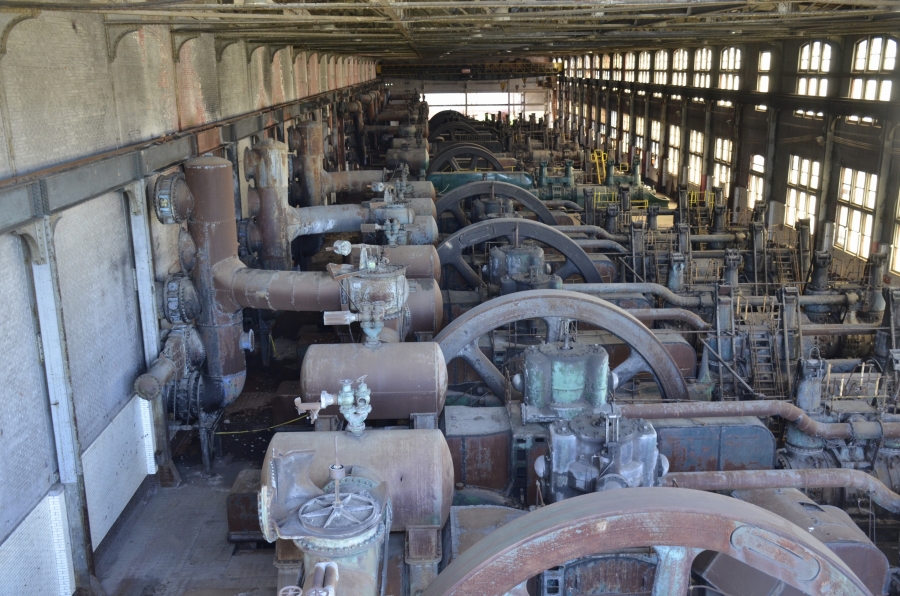 Visitors to SteelStacks can walk along an elevated public walkway — part recreation path, part museum — and look inside the guts of the old steel mill.

ArtsQuest and SteelStacks now employ 70 full-time and 300 part-time workers. There’s also a resort casino on the property of the old steel mill that employs 2,300. The casino and art house jobs are welcome, but they’re a far cry from 30,000 steelworkers. Most casino jobs don’t pay as well, either.

Still, Matthew Tuerk with the Lehigh Valley Economic Development Corporation said the repurposed steel site serves a bigger role. His job is to attract business investment to the region.

Tuerk said when potential investors come to visit: “You take them to SteelStacks and it leads you to that natural story of, 'This was the industrial heritage of the region and we’ve pivoted now to the 21st century.'”

“You have this really diverse economy that is kind of insulated against any kind of significant economic shocks,” Tuerk said. “We’re hard-pressed to say Bethlehem is an X. Bethlehem is a little bit of everything.”

Still, the city’s recovery is very much a work in progress, and people here readily acknowledge this. The city’s household income is lower than the national average and poverty is high. Yet among old industrial cities, Bethlehem is doing well.

Alan Berube with the Brookings Institution has been studying the economic performance of 70 older industrial American cities. He breaks them into four categories, from strong to vulnerable. He put Bethlem in the top category. He said “strong” cities — such as Bethlehem, St. Louis, and Waterloo, Iowa — share some common characteristics.

“The first is that they have an innovation engine," he said. "In a lot of cases, the ability of them to grow new kinds of products and companies and jobs is tied to having a research university nearby.”

And point No. 2: Successful industrial cities have also reinvested in their downtowns.

“They’re bringing jobs and people back into the core after what was many decades of suburbanization and sprawl,” Berube said.

That matters to potential new businesses and residents. Downtown Bethlehem is teeming with shops and cafes — no boarded-up windows in this old steel town. 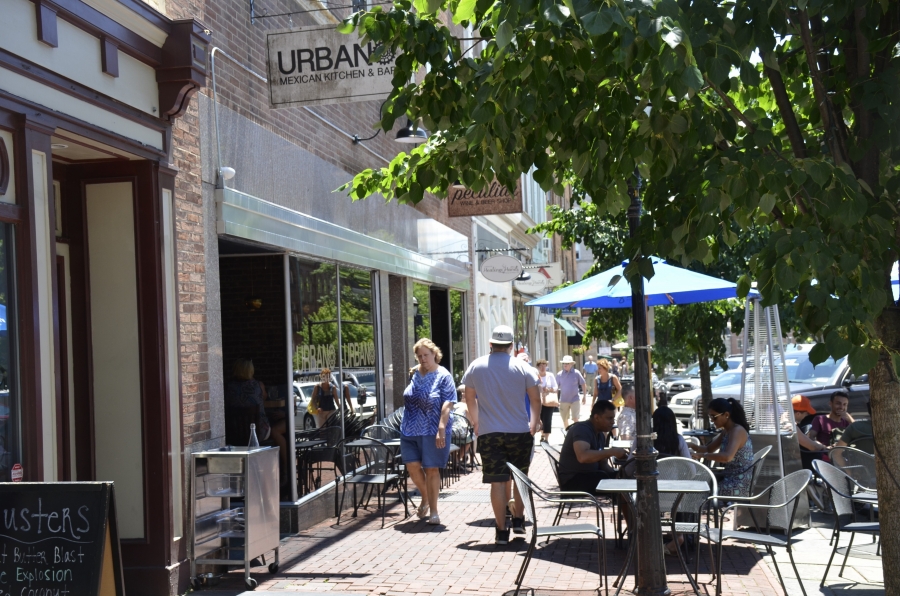 Downtown Bethlehem is lively, full of retail shops and restaurants.

“So whether the immigrants themselves are driving those outcomes or the immigrants are attracted to places that are experiencing greater outcomes, you definitely see the ‘strong' cities on the list experiencing a greater change in their foreign-born population over the last 15 to 20 years. In fact, many of them play a strong part in the entrepreneurial economy, repopulating a lot of neighborhoods that have been suffering from vacancy and abandonment.”

While many old industrial cities have suffered population loss, Bethlehem has held steady for 30 years. Indian, Chinese, Mexican and Dominican immigrants, as well as Puerto Ricans, have arrived over the past two decades to help replenish the population.

“I would say maybe the vision for the future began in 1961,” said Donchez. “We’ve always been very fortunate to have very progressive mayors, regardless of political party.”

Even when steel was booming in the 1960’s, Donchez said local leaders began thinking about what was next — and they began investing in industrial parks.

“And that began to attract large manufacturing companies, high-tech companies. So many people that lost their jobs at Bethlehem Steel found employment there,” said Donchez. “If it wasn’t for the industrial parks, I think you could make a pretty good argument that we could be a ghost valley.”

Now you simply can’t talk about former Pennsylvania steel towns in 2018 without mentioning President Donald Trump. He loves to visit them. And you could plausibly argue that voters around Bethlehem — swing voters in swing counties in a swing state — put Trump him in the White House. Reviving American steel has been one of his key promises.

And Trump has been touting his success recently, bragging about the positive impacts of newly imposed tariffs on imported steel and aluminum.

“Our steel industry is going through the roof," the president said during a recent rally. "US Steel just announced they’re expanding or building six new facilities.”

That’s not true. US Steel did announce that it’s restarting two blast furnaces in Illinois, which is expected to create 800 jobs, but there’s no evidence to back up Trump’s claim about six facilities. The company did not return an email request for comment.

Most everyone involved with the steel industry agree: it’s too early to declare that steel is back. Yes, the tariffs are giving a bump to some existing mills like those in Illinois. But can steel actually come back to a city like Bethlehem?

“I don’t think so, no,” said Mary Beth Deily at Lehigh University, an economist who has studied the steel industry.

“They’re not going to be building integrated plants, I don’t think,” Deily said. “You're talking hundreds of millions, even a billion dollars. I don’t see it happening, no. I don't think Bethlehem would turn back into a steel town, and I don't think a lot of the residents would want it to because there was a lot of pollution associated with it. Of course, there would be more pollution controls these days.”

Deily said tariffs should benefit existing US mills, but those are so-called “mini-mills,” which require fewer workers because of improvements in technology. As for the mammoth “integrated” mills, like the one Bethlehem used to have, there’s only one still operating in Pennsylvania and 10 throughout the entire country. And Deily points out: “Some of those owners are foreign corporations so it's a little unclear who's going to benefit.”

Ask former steelworker Bruce Ward what he thinks of attempts to revive steel here, for him, it’s just talk — too little, too late.

“Now that people are interested in the steel, if they had that same kind of interest before, the steel company would still be running,” said Ward.

Ward said the country needs to invest in its industrial base. For him though, that’s not pining for the past, it’s looking at how old industrial cities like Bethlehem can find their place in the global 21st economy. 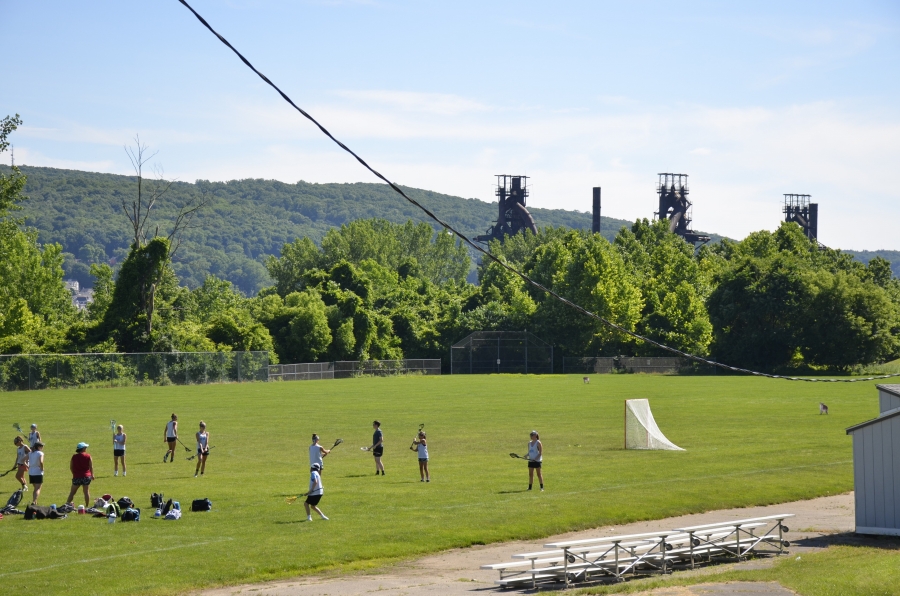 Lacrosse players in the shadow of the old Bethlehem Steel mill.