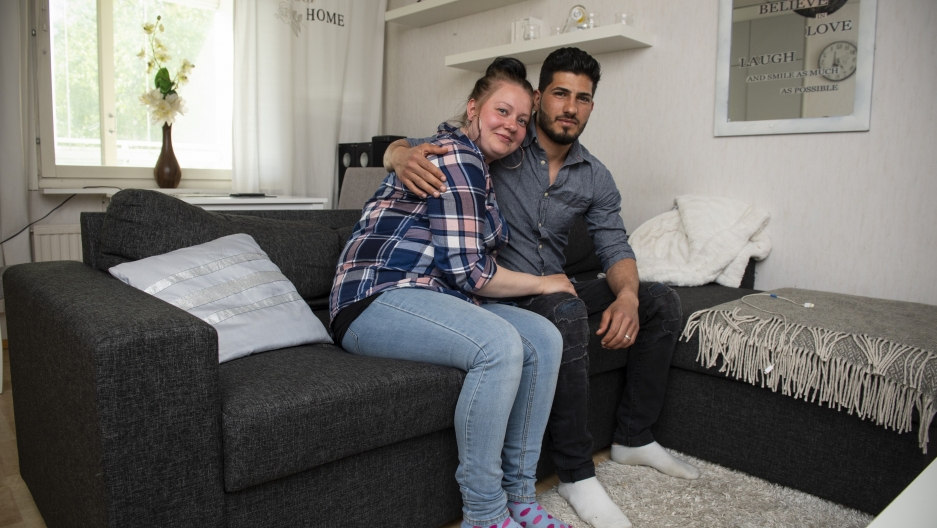 Haitham Dagher (right) and his girlfriend, Satu, in their apartment in Oulu. (Ville Honkonen / PRI)

Tornio is a small town in northern Finland, just inside the Arctic Circle. It is also the southernmost point where you can cross into Finland from Sweden by land. During the European refugee crisis in 2015, migrants started crossing into Tornio by the thousands.

Many of the refugees arriving in Tornio came from Iraq (60 percent). The director general of the Finnish Immigration Service, Jaana Vuorio, says so many Iraqi refugees came to Finland because there has been a growing Iraqi diaspora in Finland since the 1990s.

"Iraqis have been in Finland the biggest group for the last 10 years," says Vuorio. "And that's due to the fact that we have resettled Iraqi refugees to Finland since 90s. So there has been a community already."

With an established community in Finland, word spread among Iraqi refugees that Finland was a good place to go.

Haitham Dagher grew up in Iraq amidst sectarian fighting. As ISIS insurgents made their way toward Baghdad, Haitham joined an opposition militia, led by the Shiite cleric Mahmoud al-Sarkhi. Iraqi security forces started cracking down on the militia, executing or imprisoning Haitham's confederates.

Haitham decided it was time to get out of Baghdad. He sold his car and used the money to make the crossing to Europe.

After a month-long journey through seven countries, Haitham arrived in Tornio in September 2015, with 20 euros left in his pocket and no winter jacket. He was looking for a safe place where he could start a new life — go to school, get a job, start his own business. He had heard that Finland was a good place for Iraqis to go.

"It's good country, it's small country and they say they have nice people and they help refugees too much," says Haitham. "And then I say 'OK, I will go to Finland.'"

But Finland was not prepared to take in so many refugees. Anti-migrant demonstrations broke out at the entry point in Tornio, with protesters waving Finnish flags and chanting "Finland is for Finns, Close the borders." A month after Haitham arrived, in October 2015, a self-proclaimed neo-Nazi started a white nationalist group called the "Soldiers of Odin" in Kemi, a town not far from Tornio. It's members wear matching black jackets with a skull in a Viking helmet on the back. They patrol the streets, supposedly to protect Finnish citizens from refugees.

Soldiers of Odin members have come after Haitham on the street, chasing him with bats. These days, Haitham is careful never to walk outside alone at night. White nationalist groups are still on the rise in Finland. According to police reports, racially motivated hate crimes spiked by 30 percent in 2015, and they still haven't returned to pre-2015 levels.

But still, Finland was safer than Iraq. Haitham put in his application for asylum and a residence permit, with the aid of a state-provided immigration lawyer. The Finnish Immigration Service was swamped with applications for asylum. Haitham was one in 32,000 refugees who arrived that year, 20,000 of whom were also from Iraq.

After a little over one year of waiting, Haitham received his response: asylum not granted. Haitham was surprised — and devastated.

"It broke everything, I think," says Haitham. "What I can do, I can't live here and I can't live Iraq. Where I go?"

This leaves Haitham in limbo. He has submitted an appeal of his asylum rejection. He receives about 260 euros per month from the state, which does not go far in a country where cost of living expenses are 700 to 900 euros per month on the low end. During the day he goes to the gym and waits to hear about his appeal. Haitham says this daily routine gets boring, but he has no other option. Without a residence permit, he is not allowed to get a job, find permanent housing or enroll in school.

Haitham is living with his girlfriend, a Finnish woman named Satu. The uncertainty surrounding Haitham's future has put stress on their relationship. They are engaged to be married and trying to make a home together, but neither of them know what they will do if Haitham's asylum appeal is rejected.

Getting married to Satu wouldn't solve Haitham's residence permit problem. Haitham has applied for residence based on asylum. Applying for a residence permit based on marriage would be a separate process with its own complications. The Finnish Immigration Service would then investigate whether they consider it a real marriage. And getting married in Finland requires a passport, making it difficult for asylum seekers.

Many Iraqis opt for voluntary deportation

The reasons why some refugees win asylum is opaque — the Finnish Immigration Service decides each applications on a case-by-case basis. But some decisions made the process more stringent.

In 2015, the nationalist-populist Perussuomalaiset Party ("Finns Party") gained enough votes  to become part of the majority coalition in the Finnish Parliament. They were able to get certain pieces of their right wing agenda into the government's Strategic Programme, which sets the country's political strategy.

"We welcome immigration as long as it's beneficial for Finland and the people who are coming here really want to go by the Finnish rules and they are willing to work or study," says Mika Raatikainen, a Member of Parliament representing the Finns Party. "We don't really want to have any free passengers who just come here and enjoy our pretty good social services and all the benefits we have built in Finland."

The Finnish government has accelerated deportations. Finland declared Iraq safe enough for refugees to return to, and they have paid to fly about 5,000 Iraqis back to Baghdad under a voluntary return program.

"We used to have a national protection category," says Jaana Vuorio. "That was abolished from our law. Also, previously, if an asylum seeker didn't want to return voluntarily, a temporary residence permit could be assigned. Those were removed from our law, so it means that more applicants were refused."

Haitham is one of over 10,000 Iraqis living in Finland without status. In 2017, about 55 asylum seekers whose cases had been rejected in Finland decided to walk back over the border and try their luck in Sweden. But the EU has an agreement, called the Dublin Regulation, that states that refugees can only apply for asylum in one country. So Iraqis that have left to try their luck in other European countries will get sent back to Finland.

There is something different about Haitham's asylum application this time around that might improve his chances. Haitham is one of many refugees who have converted from Islam to Christianity.

The approval rate for asylum applications in Finland rose from 27 percent in 2016 to 40 percent in 2017. In a statistics report, the Finnish Immigration Service cites conversions to Christianity as one of the most common reasons for the increase in positive asylum decisions.

The Finnish Immigration Service considers Christians to be at greater risk of persecution in Iraq than Shiite Muslims, who belong to the majority religion. If Haitham is deemed to be at high risk of religious persecution in Iraq, this would help him qualify for asylum in Finland.

But there is no guarantee. The Finnish Immigration Service will evaluate whether they consider Haitham's conversion to Christianity to be legitimately based on faith. Haitham says his conversion is real. After his girlfriend Satu started taking him to church, he he found a community of people who did not discriminate against him based on his religion or the color of his skin. It was very different from Haitham's experience growing up in Iraq, where religion was often a source of conflict.

"They like me too much and not have racist," says Haitham. "They cook food and they say come eat with us, and they make coffee and we drink together."

Jaana Vuorio explains that many refugees had early interactions with Finnish churches when the reception centers were overwhelmed with the numbers of refugees entering the country. When churches stepped up to provide emergency reception centres, this started an ongoing collaboration between the Finnish Immigration Service and the Finnish Ecumenical Council of churches.

"Churches have trained our staff on baptism and what is the precondition for somebody to get baptized and what kind of religious education they receive," she says. "Also, we have explained to these churches about how our asylum procedure goes. So we have really had a lot of dialogue and support from churches."

With so many factors at play, converting to Christianity might be what helps push Haitham's application into the positive category. If so, the first thing Haitham wants to get to work manufacturing appliances out of aluminum — that is the work he was trained to do in Iraq. He also wants to continue learning Finnish language, which he enjoys.

"Because when it's coming, this residence permit, you have life, you can get job, you can go to school. You can do your life," he says.

A previous version of this story incorrectly labled the Perussuomalaiset Party as far right. The party rejects the left-right political spectrum.