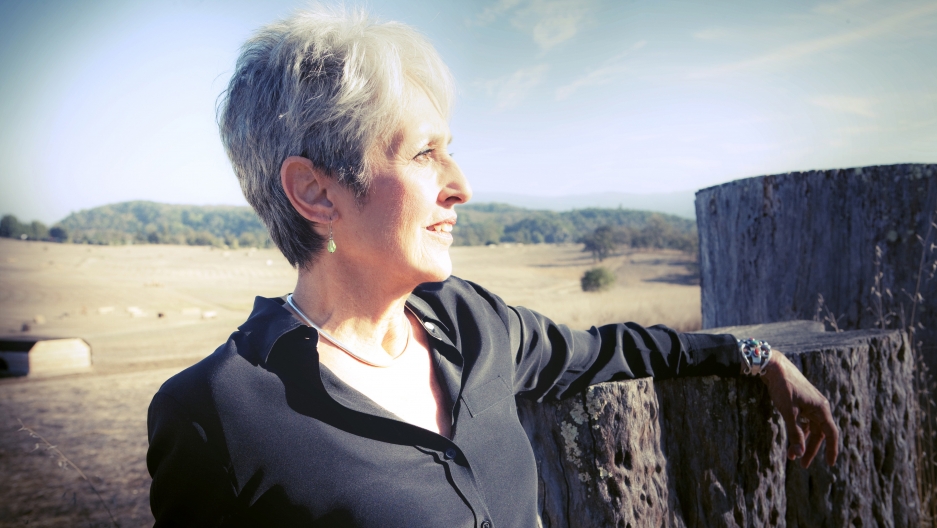 For all the turmoil that occurred in the '60s, even Joan Baez, who's now 77 years old, admits she never could "have dreamed that things could be this ghastly ... Nobody could have written this stuff."

The 1960s was a turbulent decade in American history. There were political assassinations, the US was embroiled in the Vietnam War and marchers for civil rights occupied the country's streets. One of the voices who defined the music of that decade was Joan Baez, who debuted her first album when she was just 19 years old.

Now 77, Baez says for all the turmoil that occurred in the '60s, she never could "have dreamed that things could be this ghastly [in the United States] ... Nobody could have written this stuff."

She says although she's shocked the current administration has "no empathy — zero," her trick to preventing the news from getting to her is to is "stop whining about it and try to figure out how to combat" the negativity.

One would think such frustration would lead to Baez writing and releasing the same kind of folk, protest anthem she performed in the '60s.

But she feels that music can't be replicated.

"That time period of 10 years during which I had the great fortune to be present, there were songs that were written that probably won't be repeated. I mean it was just an explosion of talent."

This is when artists like Pete Seeger, Bob Dylan and John Lennon were at their peak.

Baez says singing "We Shall Overcome" at a protest march these days would be too much of a setback.

She says a new song is needed and although there are new forms of protest music — perhaps the most viral and recent being Childish Gambino's "This is America" — folk anthems are simply really hard to write.

"[Hopefully], that song has been written and we haven't heard it yet," she says.

But Baez is still writing and her latest album,  "Whistle Down the Wind," is full of poignant, timely tunes.

And none more so than the song "The President Sang Amazing Grace." The song refers to the 2015 mass shooting at the Emanuel African Methodist Episcopal Church in Charleston, South Carolina that left nine dead.

At service for one of the victims a few days after the attack, President Barack Obama led the congregation with the hymn, "Amazing Grace."

Baez covers the song on her latest album: