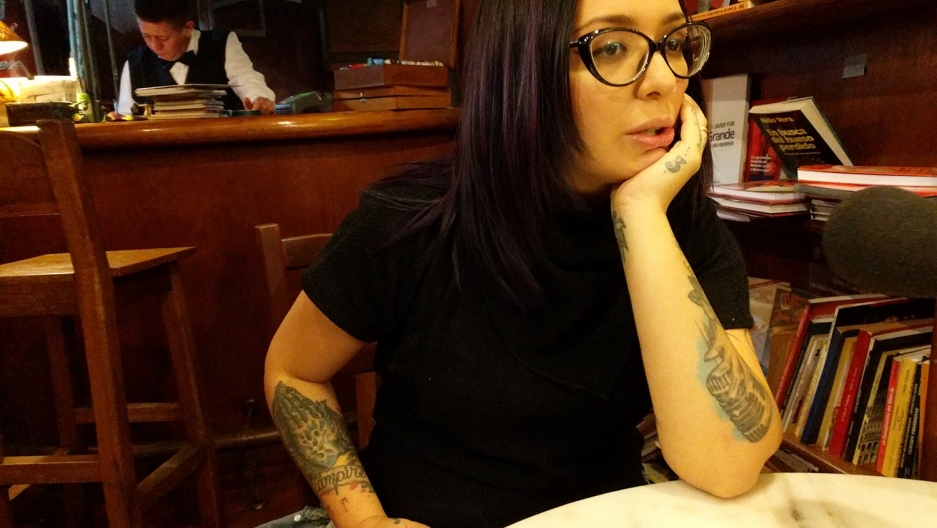 Andrea Valobra's career took off, until she started speaking out against violence against women.

It took a long time for Andrea Valobra to realize something basic about her culture. She grew up knowing that women were expected to do certain duties that men didn’t have to do, like cleaning and cooking. But she didn’t understand the full extent of the machismo culture until she was in her teens.

Her first boyfriend raped her. Another hit and choked her.

She says her family explained it away.

"'He likes you, so he will rape you,'" she says. "'He loves you too much and that is why he has to control your phone.'"

"'They can't control themselves.' I was like, really?" she says.

Valobra didn’t have to keep her frustration to herself; she had a platform to send a message.

At 16, she appeared on Rojo Fama Contrafama, a competition reality show similar to American Idol.

“I finished third, and I didn’t win, but that was a good thing,” she says.

Lots of people didn’t like the person who came out on top. The audience was outraged that Valobra didn’t win. Her career took off.

Then Valobra decided to use her fame to talk about violence against women. In 2015, she released the song Ella,” which means “she” in Spanish.

It describes a woman in a house, listening to the sounds of her husband arriving, and fearing being beaten again.

“Then I kind of try to tell that, ‘come on, whoever loves you wouldn't do that,’” Valobra says. “‘You really have to get out of there. Take your freedom. That's all that matters.”

“Some people said ‘Oh my gosh, why are you doing this?’” She remembers. “‘All of us men are going to feel so bad with this song. … You're overreacting.’”

But her song flourished online. Women wrote to tell her they’d watched the music video again and again. It shows bruised and bleeding women yelling their rage. And women told Valobra it gave them courage to report their own abuse.

“I have many, many people write to me, come to me and tell me ‘I thought that I was the only one. Your song changed my life,’” she says.

Valobra’s message to women — to stop tolerating abuse — came at the same time as a murder trial that captured national attention. It drove home the problem that when women do report domestic abuse, police don’t always take it seriously.

The trial revolved around Lucia Sandoval, a young mother of two who was repeatedly beaten by her husband, and — like Valobra — Sandoval says her mother had a simple message: That’s how men are.

“My mother thinks that women have to put up with everything,” Sandoval says, in Spanish. “More than anything else Paraguay is very Catholic, and so people believe in the submission of women as something normal — if the church tells you it’s normal, it has to be so.”

When the abuse got worse, Sandoval finally got a restraining order against her husband. She says police told her she had to deliver it to him. She did, but the interaction quickly became violent. Her husband had a gun, and Sandoval says he accidentally shot himself. Fatally.

“I ended up in prison, separated from my children of 8 and 4,” she says. “My children ended up without a father or a mother in the same moment. And that was very hard because I had never been away from them before. I thought I would die.”

“Many concerned citizens showed empathy and put a discussion into public discourse,” she says. “Because people didn’t dare to talk about domestic abuse before. It had always been considered as something private that needs to be dealt with at home and should be more or less hidden.”

The attention forced prosecutors to admit evidence that showed Sandoval didn’t have gun powder residue on her after her husband’s death, so she couldn’t have shot him. When Sandoval was finally acquitted and freed, it was big news.

“I went through so much, and so many people supported me and helped me. I also need to do something,” she says. “Now I argue, denounce what I see is wrong, and try to make things better.”

Sandoval responded to every interview request from the media, and stayed in the public eye. She’s became a prominent advocate and lawyer for other domestic violence victims.

Valobra, the rock star, says there’s been a dramatic change in Paraguay since Sandoval’s case and since she released “Ella.” People are willing to talk about domestic violence. More women seem to believe that abuse is wrong. More of them are willing to join public demonstrations. And some important laws have been passed that increased protections for women. =

“I was in the beginning of this, you know, because now everybody is doing it and everybody's talking about it and I see videos of girls telling their stories and encourage other people to do it,” she says. “It’s great to know that somehow I was part of it.”

Valobra is married now, and has a son. She lives with her parents, because she says that’s what’s expected of Paraguayan daughters, even rockstars. She just released a dance song that returns to the theme of women’s rights, but is less confrontational and more palatable than “Ella,” she says.

“It's camouflaged in a very good way,” she says. “It doesn't sound too strong.”

It’s Valobra’s attempt to go back into the mainstream — and her way of testing just how much Paraguayans have changed.