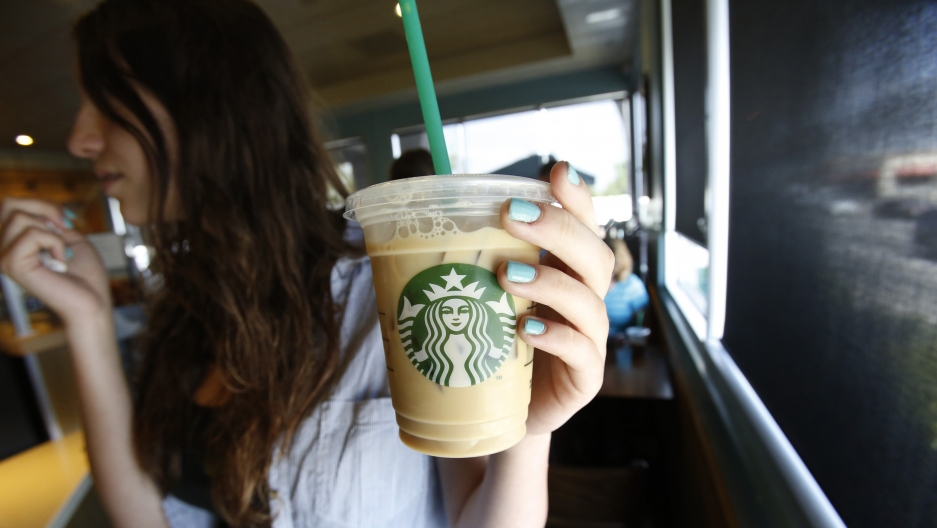 Starbucks announced plans to phase out single-use plastic straws by the year 2020. The company says it will eliminate the need for 1 billion straws annually.

Just how big of a waste problem are plastic straws?

A big problem is that straws aren’t really recyclable.

“They’re small, it’s easy for them to leak out of the waste management system and so they often escape into the ocean,” says Woglom. “And once they’re in the ocean, they last forever, they float, it’s easy for that to interact with wildlife like turtles.”

This week, Starbucks announced plans to phase out single-use plastic straws by 2020. The world’s largest beverage chain is moving toward recyclable plastics lids at its more than 28,000 stores worldwide. (Alternative-material straws will be made available at Starbucks locations. For some, including many disabled, the straw is more than just a small luxury; it’s a necessity.)

Woglom says when she heard about Starbucks' commitment, which the company estimates will eliminate 1 billion straws a year, she was “thrilled,” but with a caveat.

“As long as this is a first step, I think it’s a step that’s worth celebrating. But it absolutely needs to be the beginning of a journey, not the end.”

Starbucks is one company phasing out one product. The overall problem of plastic in the ocean remains massive — an estimated 8 million metric tons of it gets into the water each year.

“That is the equivalent of one city garbage truck, per minute, every minute of every day,” says Woglom. “So that’s a lot of plastic going into the ocean.”

Straws are about 4 percent of that.

Plastic straws have been getting some attention recently as an ecological villain. The average disposable straw is used just 20 minutes. Woglom says the movement is gaining steam, in part, because stopping our use of plastic straws is something we can feel empowered to do right now.

The anti-straw movement has even caught on in Hollywood with the celebrity-driven “Stop Sucking” campaign.

And movements like this are working. A handful of cities — including Seattle and a bunch in California — recently banned plastic straws. Soon, you won’t be able to get one in Taiwan, on an Alaska Airlines flight, or at a McDonald’s in the UK or Ireland.

Environmentalists say it’ll take governments, consumers and companies all working on the issue. And one sure way to push companies in that direction is to show that there are viable alternatives.

At Alden & Harlow in Cambridge, Massachusetts, they serve modern American food prepared tapas style and drinks with a stainless steel straw. (Waters arrive with no straw.)

“Once you start crunching the numbers for something that you use every day in a high-volume restaurant, it gets to be pretty alarming. We were talking — upwards of 100,000 plastic straws a year we would go through,” says Daniel Pontius, the restaurant’s beverage director.

Pontius says customers prefer the new metal straws, which they switched to three months ago. He says customers report that they’re classy, stay cold and don’t have a plastic taste.

Still, switching to stainless steel brings some hassles. “We had to get pipe cleaners because you want to make sure that no debris gets caught in there,” says Pontius.

At Alden & Harlow, in addition to going through the dishwasher, every straw gets cleaned by hand twice — that’s about 30 seconds per straw. Multiply that by several hundred customers each night and the extra time adds up. Still, in a matter of weeks, that elbow grease can save a restaurant some money.

“Metal straws are about 40 cents a piece,” says Pontius, who says plastic ones cost around 3 cents each.

Do the quick math: After the 14th plastic straw is served, a company would be saving money by converting to stainless steel. (Yes, there are shipping costs for heavier straws and other accounting factors, but in general, reusable straws can translate into quick savings.) 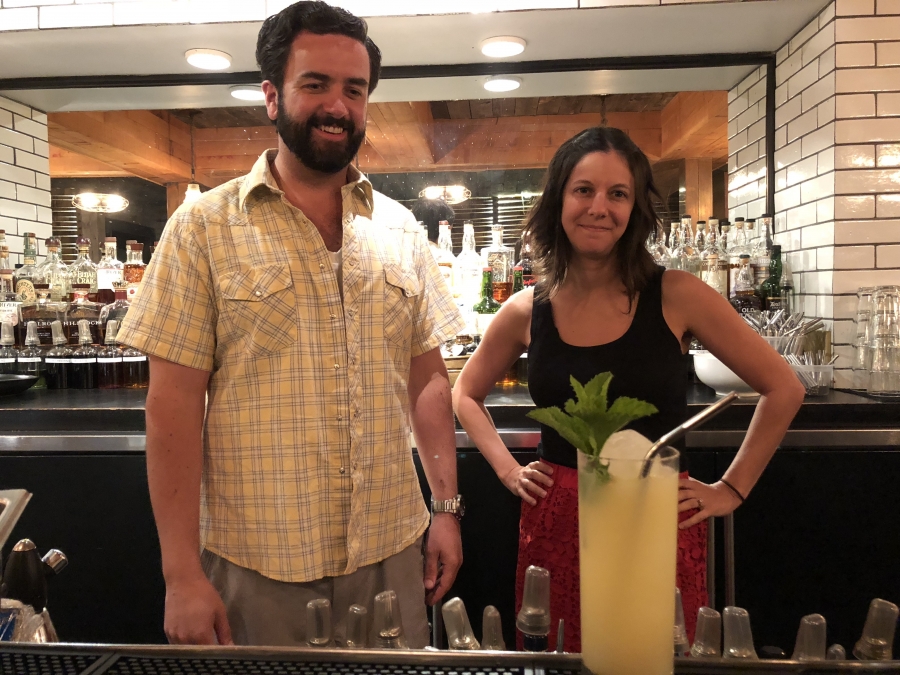 Stainless steel straws are now served with cocktails at Alden & Harlow in Cambridge, Massachusetts. Daniel Pontius and Jen Fields say the reusable straws will save the restaurant some money, but the primary motivation to switch was helping the environment.

Still, the motivation for the restaurant to change wasn’t financial. Jen Fields, Alden & Harlow’s director of operations, came up with the idea to ditch the plastic straws.

“I think that in the restaurant industry, you don’t get a lot of opportunities to have a ton of real impact on the community and the world. So, the idea of making a change that would potentially maybe influence other restaurants in the community, we thought would be good,” says Fields.

And one small step can lead to others.

“There’s this question of what happens when you do one behavior that’s good for the environment. When you do that, what happens to your likelihood of doing future pro-environmental behaviors?” asks associate professor of psychology Heather Barnes Truelove at the University of North Florida. “Humans really don’t like to be inconsistent in their beliefs and behaviors. So, if you do one pro-environmental behavior, you start to see yourself as an environmentalist, someone who cares about the environment and acts accordingly.”

That’s called positive “spillover.” But things could go the other way — when we’re feeling good about our behavior, we can become complacent.

“So then when we have a chance to do another behavior, we sort of say, ‘You know, I already did my part, I just carpooled yesterday. I don’t really think I need to refuse this meat meal today. I can go ahead and indulge and have a hamburger.’ So this idea relates more to the psychology of moral bookkeeping,” says Truelove. 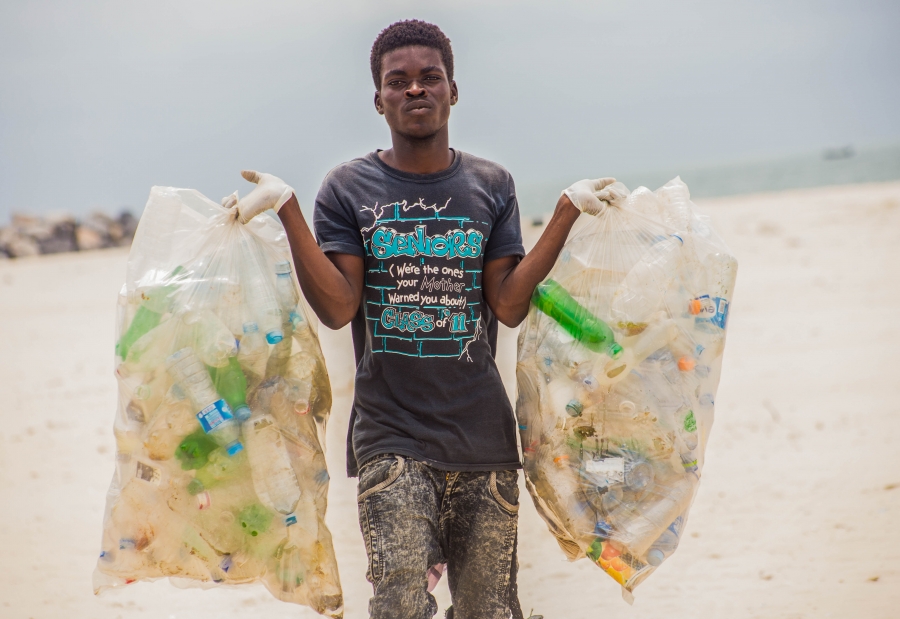 A volunteer in Nigeria collects waste on a beach during the Ocean Conservancy’s annual International Coastal Cleanup. Plastic straws were the seventh most common type of trash found last year.

Getting back to Starbucks’ decision to stop using plastic straws: A great first step? Or meh?

Critics are pouncing on Starbucks’ announcement asking: Really? Swapping plastic straws for adult sippy cup lids is the best you can do?

Starbucks says the new lids will be easier to recycle. And the company is working on other initiatives to reduce its environmental footprint, such as trying to develop a better compostable cup. And at the end of the day, while many vilify companies like Starbucks, it's customers — you and me — driving demand for their products.

Truelove says Starbucks' decision to ditch plastic straws is just a step toward changing consumer behavior. She says somebody isn’t going to walk into a Starbucks, not get a straw, “and that person has an epiphany and turns around and buys a hybrid on their way home. That’s too big of a leap, right? So this could be a baby step that’s sort of helps continue on this path toward bigger and bigger pro-environmental behaviors.”

And back to the news of the week, getting rid of a billion straws a year at Starbucks — or even a hundred thousand at one restaurant in Cambridge, Massachusetts — it’s not nothing.