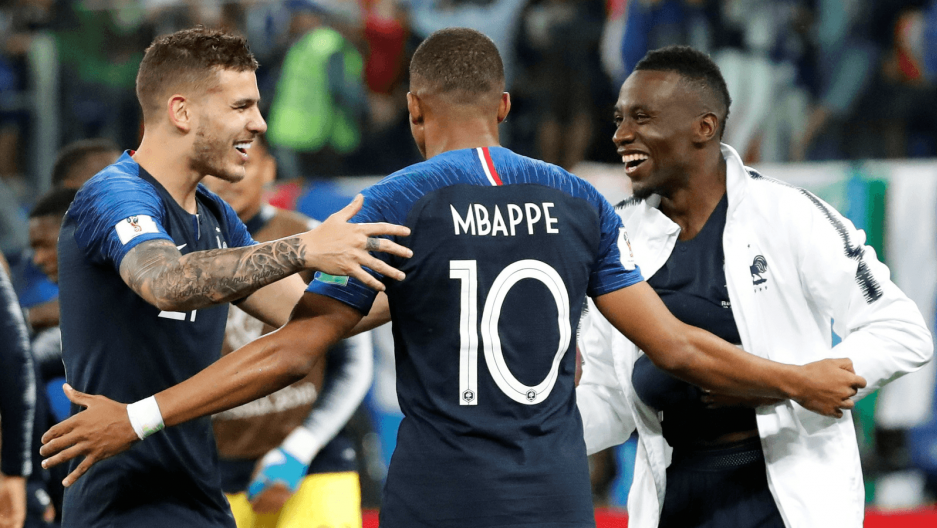 France's Kylian Mbappe celebrates with teammates Blaise Matuidi and Lucas Hernandez after the match against Belgium on July 10, 2018, in the World Cup.

Vive la France. On Sunday in Moscow, the French national soccer team will vie for its second FIFA World Cup title — a day after Bastille Day on July 14, no less — when it takes on fellow European squad Croatia for the right to be named kings of the international version of the planet’s most popular sport.

The only other time Les Bleus (The Blues) held up the coveted golden trophy was in 1998 when France served as the competition’s host. The team is competing for its second crown 20 years later due to the noteworthy efforts of a diverse, multicultural group of players — composed of both French (mostly white) natives and the sons of immigrants, many of whom are black.

Out of France’s 23 team members, 17 are immigrants or the children of immigrants. The team has 12 players who are of African ancestry, which has led to the squad to be labeled by some as “the last African team” — given the fact that no team from Africa advanced this year to the tournament’s knockout stage. Kylian Mbappe, a 19-year-old wunderkind striker who is of Cameroonian and Algerian descent, has become the face of the team after his remarkable play in the tournament.

Samuel Umtiti, who scored the game’s only goal on a header in the 51st minute, was also a part of that group. Umtiti is a 24-year-old defender who spends a majority of his time playing for Spanish powerhouse club FC Barcelona after moving from Cameroon to France with his family when he was a toddler.

When players like Umtiti produce the desired results in Europe, they become the gleam in the eye of every citizen of the country they represent. When they come up short, though, they face much harsher criticism than their white counterparts, says Shireen Ahmed, a Toronto-based sports writer who co-hosts the podcast Burn It All Down.

“You can be theirs if you are doing well, if you are successful, if you are contributing. If you are making that country look good, they want you to be part of them. You are their son, in essence,” Ahmed says. “And what happens is if you don't live up to those expectations, you don't belong to them anymore. You're disposable. And I think that that's really a crux of an issue that's very important to hear the stories. Most French fans don't realize this. They get caught up in the passion.”

This schism has grown in recent years in large part because of the growing fervor of racist populism in several European countries, Ahmed says.

“There's people all over the world who are really excited that I follow on Twitter — we call it the football Twitter family — and are really recognizing that the last four remaining teams are, yes, European but also have a huge, huge number of players of immigrant experience or first generation,” Ahmed says of the last four teams that remained heading into the semifinal, which was rounded out by England. “And that really matters because of the relevant political situation in Europe.”

'A conversation about race'

Although many of these immigrant and first-generation players like Mbappe and Umtiti suit up for the most wealthy and successful clubs in the world, they still face a double standard when it comes to overall performance when compared to their other teammates.

Ahmed points out that some of France’s most legendary players such as Raymond Kopa, Michel Platini and Zinedine Zidane were either the children of immigrants or first-generation players — with roots in Poland, Italy and Algeria, respectively  — but given their light skin color they never had to face such circumstances.

“So what's happening now is that it's more of a discussion on immigration, but it's really a conversation about race,” Ahmed says.

Ahmed mentions a comment by Belgium striker Romelu Lukaku, a black player who grew up in Antwerp and is of Congolese descent: “If you're [playing for] Belgium and you're a person of color there's no way you have not experienced racism.”

Following several displays of racism in both club and international games, particularly toward black players — including incidents in which fans threw bananas at them — over the years, FIFA introduced a “Say No to Racism” campaign in 2006. However, fulfilling that campaign may be easier said than done given the current political climate in many European countries.

Ahmed remembers one play in which of France’s biggest stars, Paul Pogba, was fouled by a Belgian player and fell down. The parents of Pogba — who plays midfield for English giant Manchester United — are from the African country of Guinea and moved to a Paris suburb before he was born.

“You had legions of French people — and probably the whole country — jumping up and standing and getting really upset that he deserved a call,” Ahmed says. “But I remarked that was probably the only time we would ever see random French people defend a black Frenchman who's Muslim.”

This article is based off an interview that aired on The Takeaway.