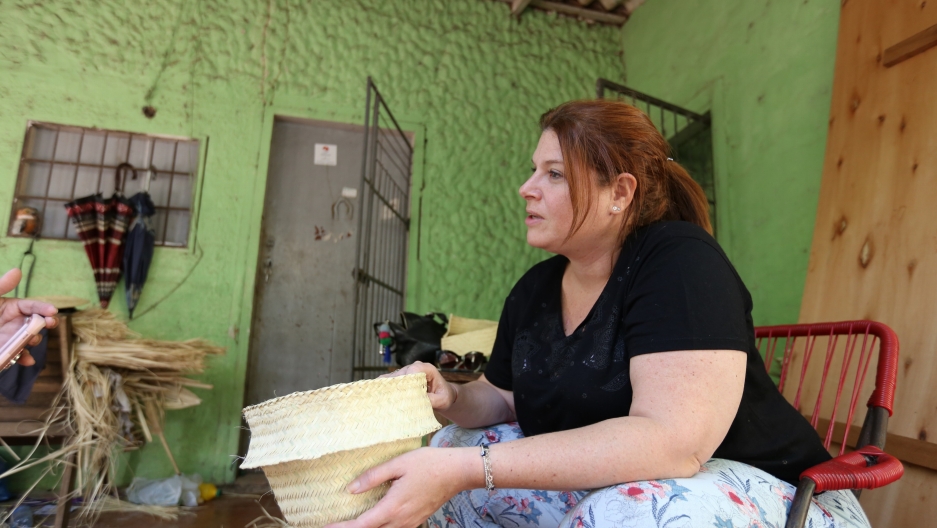 Alexandra Tauber talks to a countryside artisan in Paraguay.

It’s been two months now since the US moved its embassy to Jerusalem. The embassy opened May 14 to official fanfare while dozens died the same day along the Israel-Gaza border. More than 130 have been killed since protests began on March 30 and have continued for months.

The two countries to follow in America’s footsteps were Guatemala and Paraguay. Tiny, majority-Catholic Paraguay, landlocked at the heart of South America. Why?

The answer has to do with World War II and the Jews who fled the Nazi threat in Europe for safety in South America.  About 1,000 Jewish families moved to Paraguay.

Alexandra Tauber is now the third generation of her family to live in Asunción. Her grandparents tried to get citizenship in Brazil and Argentina before coming to Paraguay.

They and other Jews maintained a close community and married within it. Tauber remembers her grandmother used to ask her why she had non-Jewish friends; she told Tauber they wouldn’t be there when it counts.

“So that’s why I think she had trauma and persecution in her head,” she says in Spanish. “The first generation that was born here in Paraguay suffered a lot because they weren’t able to mix with people of other religions.”

It didn’t help that Paraguay also welcomed former Nazis who were willing to pay high prices for citizenship, like Josef Mengele, who Jews called the “Angel of Death.” Mengele selected some 400,000 to die in the gas chambers of Auschwitz and performed medical experiments on others. Letters from after the war show he never repented for eliminating what he considered “unworthy lives.”

After World War II, Mengele moved to Paraguay. One day in 1965, he walked into Tauber’s family jewelry store in Asunción. Her grandmother, Sonia Tauber, was the only one there.

“I believe that was the first watch store in Paraguay, so lots of important people went there — ministers, ambassadors … because it was the only one,” Alexandra Tauber says. “She knew his face, but she didn’t know from where.”

Mengele asked to see a watch. Sonia Tauber reached for it. Her sleeve went up and Mengele saw her tattoo — the numbers put on her at Auschwitz. His face changed. Then she knew where she’d seen him before.

“She recognized him and screamed 'Mengele! Mengele!'” Tauber says. “And my grandfather came to see why she was screaming.”

Mengele turned and ran out. That’s where the family story ends.

It took international pressure to get Paraguayan dictator Alfredo Stroessner to cancel Mengele’s citizenship in 1979. There were rumors he was still there for years afterward.

After the war, the Jewish immigrants and their children living in Paraguay flourished; they became a prominent minority group and some of the most important business people in the capital. But like a lot of Jews everywhere after World War II, they kept a focus on Israel.

“When I was a girl, I remember my grandfather would buy trees in Israel and send money to Israel. They always helped,” Tauber says. “And, in fact, Jews in Paraguay have a strong influence in the relationship with Israel.”

There's a legend about that strong relationship, Tauber says. The story is that a famous Jewish doctor — a relative of one of Tauber’s friends — lobbied the Paraguayan government to vote in the UN in 1947 to partition Palestine — a move that led to the creation of Israel.

Many times since then, Israel has helped Paraguay with aid and assistance for its agriculture industry. Now, kosher meat is one of Paraguay’s biggest exports. Tauber says all of that was helped along by Jewish Paraguayans.

“And you can see the influence now again, with Paraguay being the third to move its embassy from Tel Aviv to Jerusalem,” Tauber says. “That certainly didn’t happen without their influence.”

At the dedication of the new Paraguayan Embassy in Jerusalem in May, Israeli Prime Minister Benjamin Netanyahu hailed Paraguayan president Horacio Cartes, who’s been investigated by the US for drug trafficking and money laundering.

The embassy move was controversial in Paraguay — President Cartes was on his way out, and his successor, Mario Abdo Benítez, had already been elected; Benítez said he would "be very careful" in his diplomacy.

For the older members of the Jewish community in Paraguay, though, it was a culmination of everything Tauber’s grandmother’s generation had worked for.

But their descendants are more attached to Paraguay. Tauber grew up in Paraguay and tried to live in Los Angeles before deciding to move back home. She worked for a long time in a women’s prison in Asunción. Now she helps businesses connect with low-income artisans in the countryside, like Ña Cata, a weaver and grandmother who still helps support her children and takes care of her father, who’s in his 90s.

“I wanted to do so much,” Cata says as she weaves. “I wanted to be a teacher. But I could never do anything else. I had to be an artisan. It’s work that never ends. You finish one, you start another. That’s how it is.”

Cata says she didn’t know any Jews before she met Tauber, and she doesn’t know any other Jews now, but Tauber seems nice.

Later, Tauber reflects that she’s still something of an outsider in Paraguay.

“There are a lot of urban legends about Jews, especially among people in the countryside, that we supposedly killed Jesus, that Jews are monsters,” Tauber says. “Sometimes when people realize I’m Jewish, they can’t believe it.

Despite all that, Paraguay is the only place that feels like home for Tauber.