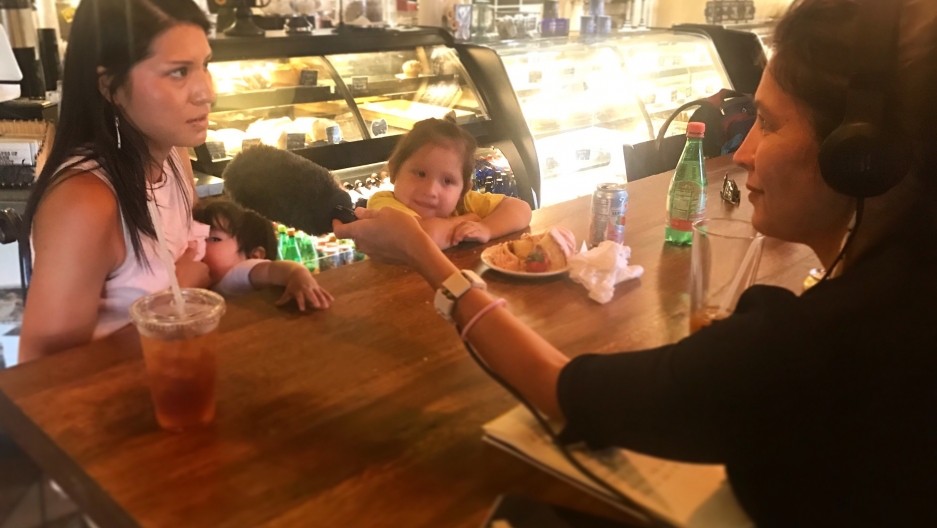 Jasha Lyons Echo-Hawk is running for office as a Democrat in District 35 in Oklahoma. Here, she's breast feeding her daughter while giving an interview to Across Women's Lives correspondent Allison Herrera for an upcoming story.

During spring negotiations at the World Health Assembly in Geneva, the US delegation threatened Ecuador and other countries with punitive trade measures if they didn't water down language in a resolution to "protect, promote and support breastfeeding," The New York Times reported.

The US delegation, pressured by infant formula manufacturers, ultimately failed when Russia instead introduced the measure after more than a dozen other countries backed off.

"What happened was tantamount to blackmail, with the US holding the world hostage and trying to overturn nearly 40 years of consensus on the best way to protect infant and young child health," Patti Rundall, the policy director of Baby Milk Action, told The New York Times.

News Deeply's Amruta Byatnal said the resolution had been in the work for a couple months before the US objections were raised..

“What activists and member states from a lot of different countries wanted in the resolution was stricter guidelines for governments to establish the control over the sale and the marketing of breast milk substitutes, which is like formula food, you know, food that is given to babies, and encourage breastfeeding instead.”

The US did not want that. Instead, as Amruta explained, "they also tried to introduce an alternate resolution within the World Health Assembly and in that resolution, there was no mention of breastfeeding at all."

Byatnal said that delegates involved in the negotiation felt that the US was concerned with protecting the baby formula industry and not encouraging breastfeeding.

"The baby formula industry is huge, as you know, and they've been doing everything in their capacity to market across the world and more so in developing countries now, which then leads to mothers not being encouraged to breastfeed," Byantal said.

Research has shown that breastfeeding is much better than formula. A US Health and Human Services representative told The New York Times they just wanted to make sure women who are unable to breastfeed have access to other ways to feed their children without being stigmatized.

We asked readers and listeners about their experiences with formula and breastfeeding. "Did you feel pressured to use formula over breastfeeding? Does your government or community 'protect, promote and support breastfeeding?'"

Here are a few of the responses we got. They are lightly edited for clarity.

Rachel Morey, a teacher, wrote on Facebook that she felt very little support when breastfeeding:

"I'm a teacher and because the US, and most companies within it, don't offer any sort of paid time off, I had to go back to work when my son was four months old. I had to pump 2-3 times a day at work, which meant finding coverage for my classes or giving up my lunch or planning period on a regular basis. I was struggling to keep up with my work and being a new mom still home. I sought out various outlets for support or suggestions for how to make it work ... Mostly what I heard was, 'it was your choice to breastfeed.' I felt alone and defeated and barely made it through the year with my sanity."

Sharon Anne, an actress and model from Española, New Mexico wrote us on Facebook and said:

"I felt 'pressured' to breastfeed. In that, I felt shamed to be making my OWN choice based on my personal circumstances. I was supported by my midwife and the nurses at IHS (Indian Health Service) but as soon as I entered a private hospital there was more entitled opinions over what I SHOULD be doing to care for my baby. That stress was unnecessary and should never be a part of the process. I was a first-time mother. In the end, I did both and breastfed till my daughter was 8 months old and supplemented when necessary.

Jessi McEver, a mom and media professional in Tulsa, Oklahoma, recounted to us via text message that she was objectified when breastfeeding her infant daughter in a local grocery store. She found herself without a cover and was in a bind. Faced with a dilemma of a crying, fussy child or nursing without a cover, she chose the latter. This led to comments from a fellow patron, who said, "Where can I get one of those?," referring to her exposed breast. She said she was so shocked at his comments that she wasn't even sure he meant to say what he did until she got to her car.

Lenzy Krehbiel Burton, a freelance journalist, told us via Facebook what it was like to pump at work:

"My kids are almost exactly six years apart and I nursed both of them. The experiences I had with editors and even physicians were wildly different regarding my decision to breastfeed. My daughter was born in 2010. My employer at the time was a small publishing company that owned three weekly newspapers in the outskirts of the city area. My editor/publisher made it clear that if I brought a pump to the newsroom, the only places I would be allowed to use it were either in the warehouse in the back (that did not have heat or A/C) or in the kitchenette that did not have a door or working light fixture. This was before the passage of the Affordable Care Act, which includes some workplace provisions for breastfeeding mothers, although my employer at the time could have claimed an exemption due to its small size."

"I utilized the Health East Midwives for both pregnancies and births. First child at St. Joe's in St. Paul and 2nd at Woodwinds in Woodbury. Same pool of midwives, with the philosophy that breastfeeding is the preferred method. They wouldn't allow the formula companies to give free samples to mothers, as it was seen as pressure to go to formula. I wanted to breastfeed if at all possible and did with both girls. It was pretty damned hard and I don't judge women to who don't choose it. I continued to breastfeed for 12 months with both girls. It was a source of stress. Pumping when going to meetings and work. Supplementing with formula when I didn't feel I was making enough milk (1st child). But I'm glad I did it. Primarily because it had a lot of lessons for me about what my body was capable of and taught me to ask for help when I needed it."

Amruta Byatnal says that this controversy goes beyond breastfeeding.

“The thing that the nutrition advocates are most concerned about is that as the private sector gets stronger, their presence is going to be more involved in all kinds of food and not just baby food," she said. "And that's going to have an effect on nutrition and what people consume.”