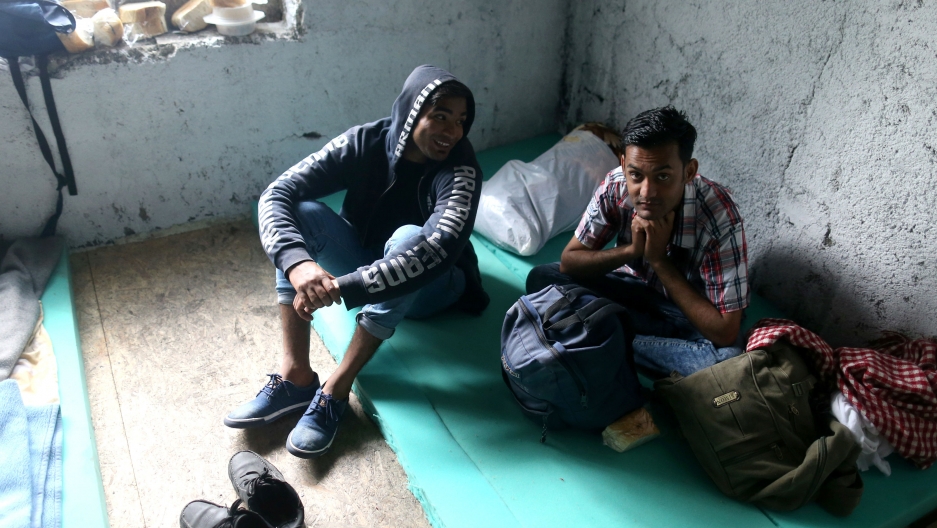 Sipping tea at a safe house in northern Bosnia on a drizzly mid-June afternoon, Muhsin Saafi recalled admiring a sunrise over the mountains after he and his family walked all night to cross into the country.

“We saw how beautiful the landscape was and thought, ‘It’s like Switzerland!’” he said. “We were in a camp in Serbia for six months and then received a call from a family here who told us that Bosnia was a good country that respected families and refugees.”

It was a small glimmer of peace in an otherwise perilous journey. Saafi, 18, is traveling with his parents, four brothers, four sisters and his uncle and aunt. They have been on the road to Europe since 2016 after fleeing Nangarhar province in eastern Afghanistan. Saafi says his family worried they could become targets for ISIS and the Taliban because his uncle’s construction company worked with US forces. 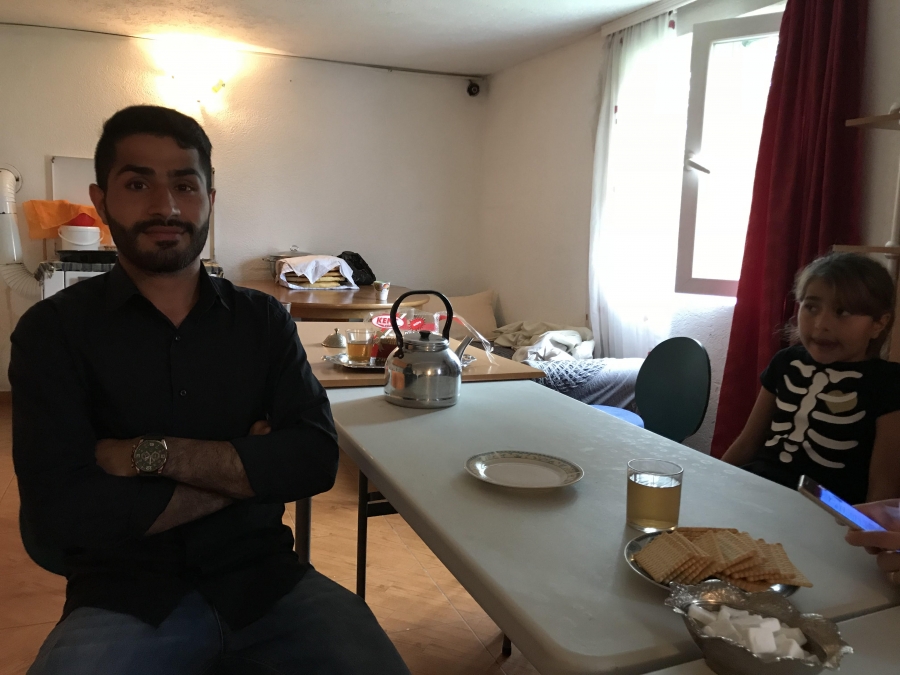 Muhsin Saafi, a refugee from Afghanistan, at an NGO-sponsored safe house in Bihać, Bosnia. He and his family have spent two years trying to reach Germany.

On June 9, the Taliban announced a ceasefire for the first time in the 17-year conflict to coincide with celebrations marking the end of Ramadan. That same weekend two suicide bombings — one claimed by ISIS — in the state of Nangarhar killed around 50 people.

The Saafis now find themselves in a country that has only just begun feeling the weight of Europe’s migrant crisis. Between 2015 and 2016, more than a million people, mainly fleeing the wars in Syria, Iraq and Afghanistan, entered Europe on boats, buses, trains and on foot. Those traveling along the “Balkan Route” passed through Turkey, the Greek islands, the countries of former Yugoslavia and Hungary on their way to Germany and other northern European nations. As European countries have shut their borders, the trails have gone underground, fanned out across the Balkans. Bosnia has emerged as a key new route.

Bosnia, a small mountainous country with a population of around 3.5 million, recorded only 775 migrant arrivals for the whole of 2017. At the end of June, Bosnian Minister of Security Dragan Mektić said that 7,128 migrants had been registered since the beginning of 2018 and that 420 had been prevented from entering in the previous week alone.

Germany is the ultimate destination for most of these migrants, who enter Bosnia through Serbia or Montenegro (all three are non-EU countries) after reaching the EU farther down in Greece or Bulgaria. But German Chancellor Angela Merkel has been battling her more hawkish coalition partners on migration and last week reached a deal to expedite the processing of migrants who enter Germany. Those who have registered as asylum-seekers in other EU nations will be deported.

Peter Van der Auweraert, the Western Balkans coordinator for the UN’s International Organization for Migration, told PRI that smugglers have opened a new franchise in Bosnia providing migrants with an alternative route to reach northern Europe via neighboring Croatia. The Bosnian state lacks the infrastructure to adequately accommodate the new arrivals.

“Here we are starting from scratch and the humanitarian situation is not good,” der Auweraert said. “If you project for the next year, even if the numbers go down, we are looking at a migrant population of 3,500 who will be stranded.” 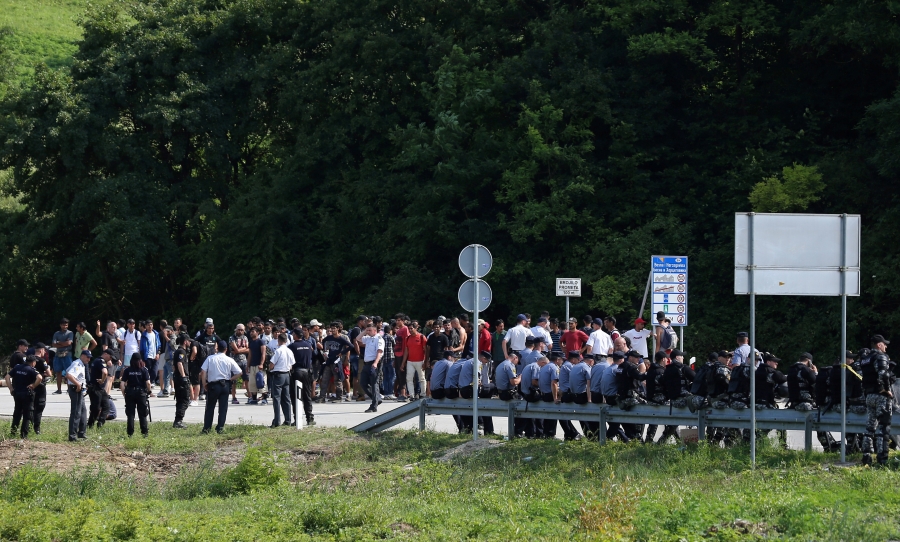 Migrants and Bosnian police are seen next to the border with Croatia in Velika Kladuša, picture taken from Maljevac, Croatia, June 18, 2018.

Bosnia currently has only two official camps, which have a combined capacity for approximately 350 people. The remainder sleep in hostels, abandoned squats, in fields and on the street.

Bosnia’s economy is still emerging from the civil war that raged from 1992-1995. As the multiethnic country attempted to declare independence from the collapsing federation of Yugoslavia, a three-way conflict erupted between Croatian Catholic, Serbian Orthodox and Muslim Bosniak forces who fought for control. The war left approximately 100,000 dead, 2 million displaced and resulted in the massacre of 8,000 Muslim men and boys by Bosnian Serb forces — the worst genocide in Europe since World War II. In 1995, a US-brokered agreement divided Bosnia into two self-governing entities — a Croatian-Muslim federation and a Bosnian Serb republic. The country’s political and territorial landscape remains delicately divided between formerly warring parties and the complicated state structure frustrates efforts to coordinate a humanitarian response to the new migration.

On May 18, buses transporting 270 migrants from Sarajevo were blocked from entering a western territory dominated by ethnic Croats, prompting a tense standoff and miles-long backup on the highway for several hours. The incident was eventually resolved peacefully, but it highlighted the political jitters created by the new arrivals in a country riddled with tensions between regional and national authorities.

Der Auweraert thinks that state authorities could have anticipated the influx and prepared more adequately. And the issue is likely to persist.

“There is a misunderstanding of the pull factor, which has nothing to do with what Bosnia does or doesn’t do,” he said. “People think they can cross into Croatia from here, and as long as that idea persists, people will continue to come.”

On May 31, Croatian police opened fire on a smuggler’s truck carrying 29 migrants, injuring nine and seriously wounding two children. Numerous migrants in Bosnia told PRI that they had experienced violence from Croatian border guards. Croatia denies that their authorities use excessive force. 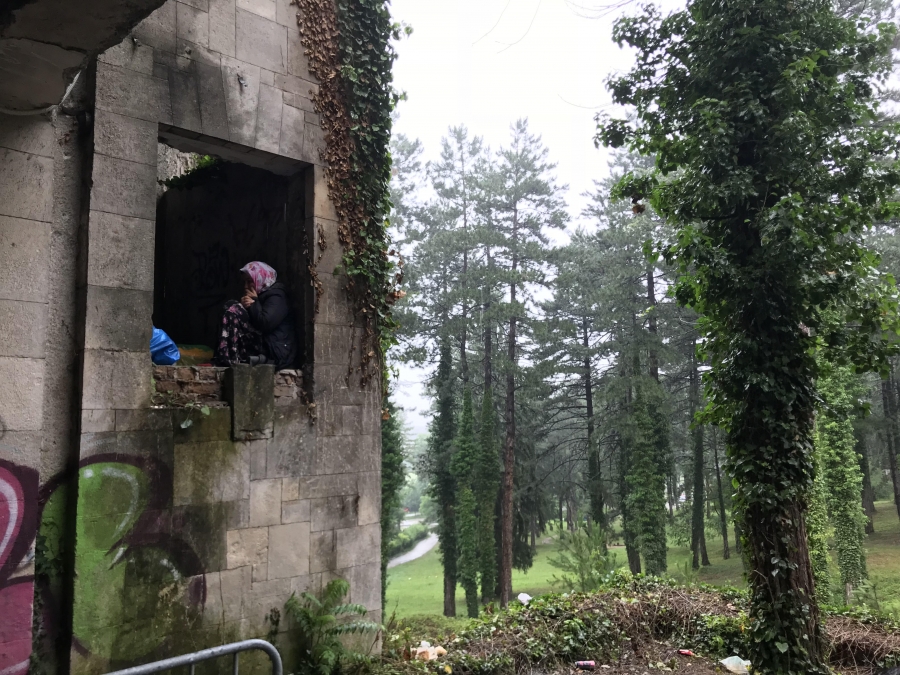 Outside Sarajevo train station, Ferdows, 17, from Herat in Afghanistan, had not yet attempted the crossing but hoped that border police would be merciful to his family as they make their way to Germany.

“I don’t think that police beat families but if they do … what can I say? It’s against human rights,” he said. “We don’t have any choice. If we go back, we will die. If there wasn’t any danger in my country I wouldn’t risk my life here. I had everything back home, except security.”

Ferdows estimates his family has spent more than $20,000 on smugglers, who maintain a vast network from Berlin to Kabul.

From Sarajevo, migrants usually take a bus to the far northern border with Croatia, often arriving in Bihać, a small town straddling the turquoise River Una, where church bells and muezzin calls from the mosque can be heard in equal measure. During the civil war, Bihać remained under siege for three years as an array of warring parties fought around it. Today, numerous buildings in the town still bare bullet holes and shell damage. 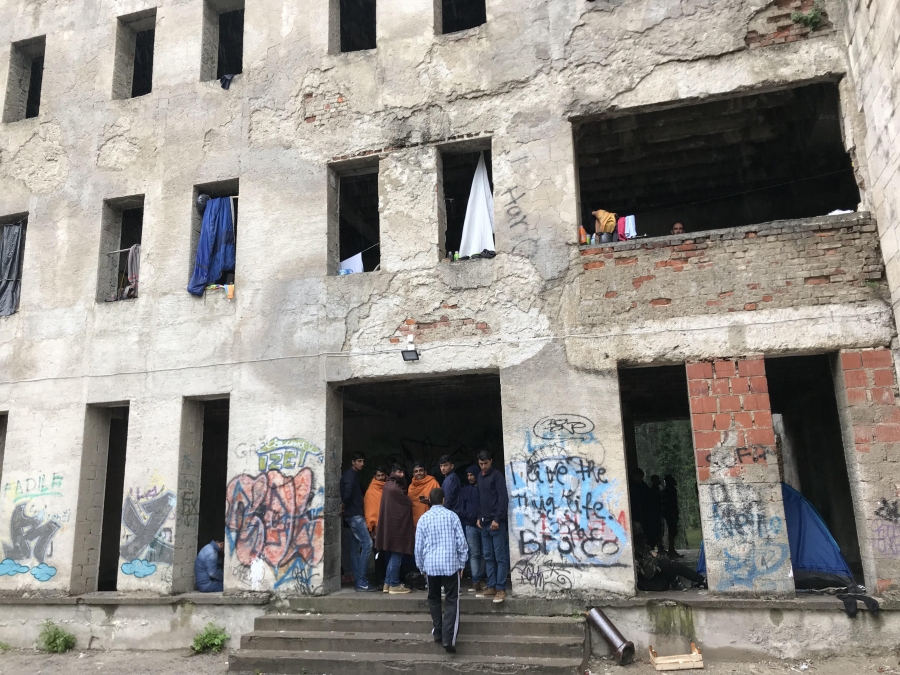 Humanitarian presence at the Bihać dormitory is low and conditions are bleak as migrants wait to cross into Croatia and head on toward Germany.

In a forest one mile outside Sarajevo, a decrepit five-story former student dormitory has become an unofficial way station for passing migrants. Trash and human waste ring the encampment, wind blows through windowless gaps in the walls and water cascades from leaky roofs. The water forms pools around the camping tents where migrants live as they prepare to make for the Croatian border.

Bosnia’s arrivals comprise a mix of nationalities: North Africans, Pakistanis and Indians, who lack a realistic chance of being granted asylum in Europe; Iranians benefitting from a new visa-free travel arrangement between Serbia and Iran; and many fleeing ongoing bloodshed in Syria and Afghanistan.

Ali Reza, 11, from the Afghan province of Parwan, gazed out at the rain lashing the building. He and six family members had been sheltering in the Bihać dormitory for a week.

“It’s not good here because there is a lot of single people,” he told PRI. “There is too much noise and it’s difficult to sleep. There are thieves around and some days people are fighting.”

Later that night, a Moroccan migrant was killed in a knife fight at a nearby border crossing in the town of Velika Kladuša, Bosnian media reported.

As in most countries in southeastern Europe, migrants do not intend to stay in Bosnia due to a combination of a limited asylum system, poor economic prospects and lack of family ties. 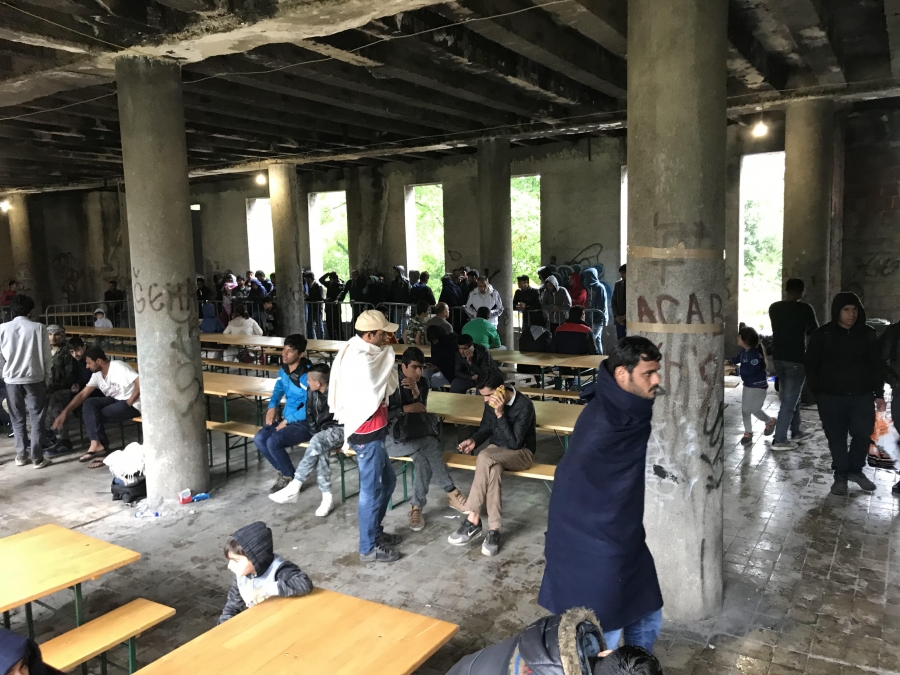 Bosnian authorities are currently debating how and where to construct better migrant accommodation in anticipation of more arrivals.

For some Bosnians, their country’s recent history has helped them understand the plight of migrants and refugees in a way that Europeans more removed from violent conflict perhaps do not.

Bosnian journalist Nidžara Ahmetašević, who also volunteers with migrant charities, told PRI that although the Bosnian state has struggled to support the migrants, the wartime experience of the locals in Bihać has prompted a wave of sympathy.

“All of us have experience of standing in line waiting for food,” she said. “When we distribute food to them, some of the volunteers start to cry because they recognize their family members. It’s not only that many people left during the war, every day Bosnians are leaving for a better life. So, we are part of this migration story too. We were them, and they are us.”

But for some residents, emotions are becoming strained, according to Aida Behrem, the director of local NGO Zena Sa Une (Women from Una), which provides support for migrant families in Bihac.

“Some people prefer not to be reminded of the trauma of the war, so are less understanding,” she told PRI.

Back in the safe house near the Croatian border, Muhsin Saafi remained determined to take his family to safety in western Europe. Over a year ago, one of his sisters was born in the Serbian forest, and recently they abandoned an attempt to cross into Croatia after seeing a sign warning of active landmines, a relic from the nineties conflict.

“If people spent a few days in Afghanistan, they would understand what’s going on. Some people in Europe think that Afghans are dangerous,” he said. “Why am I dangerous? I have a mind, I am human like you.”