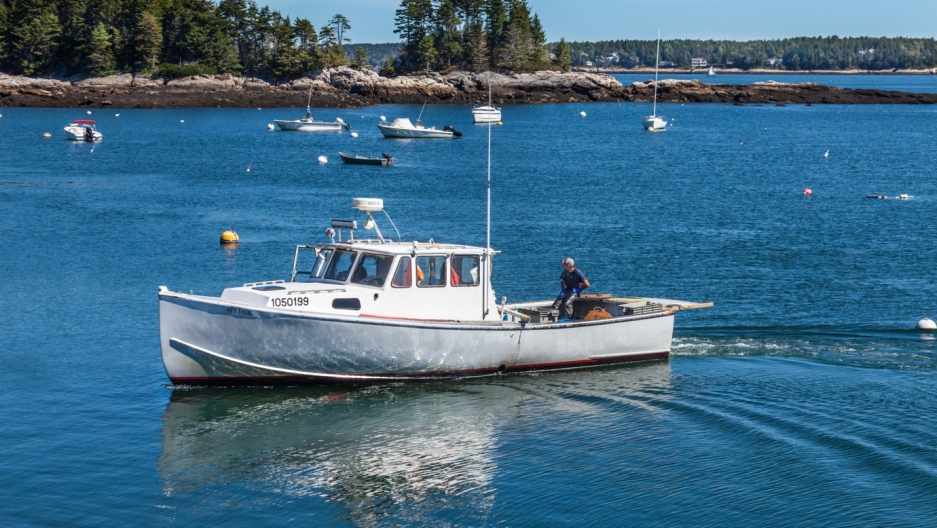 The overall catch from lobstering in Maine was down 16.4 percent in 2017 from the year before. Those who catch lobsters for a living in the state are hoping that downfall does not continue in 2018.

The lobster industry has always been a rollercoaster of a profession — with lobstermen (and women) risking their lives to bring in the biggest catches.

In recent years, though, global warming has heightened the rhythm of this already delicate dance: Warmer ocean temperatures lead to a glut of lobsters flooding the market, but water that is too warm can lead to dead lobsters at the bottom of the sea.

“The irony is that the same factor that was causing the boom could be leading to a bust,” says author Christopher White, whose latest book, “The Last Lobster: Boom or Bust for Maine’s Greatest Fishery?,” chronicles the unstable nature of one of the state’s most iconic professions — and how global warming has been adding to its uncertainty.

‘Two sides of the same coin’

In 2012, more than 120 million pounds of lobster were caught off of Maine’s waters — nearly six times more than what the catch was in the ’80s — for the first time, White says. That level of massive catches continued to 2016, and the ensuing glut of lobsters and caused their price to drop from $4 a pound to around $2.

To combat falling prices, lobstermen decided to fish even harder and haul in more than before. This increased drive led to some lobstermen raking in as much a $200,000 a year, White says, adding that high schoolers were taking home $50,000 to $60,000 for a lucrative summer job. This boom eventually resulted in lobstermen overextending themselves by buying bigger boats and hiring more crew.

The consensus from fishermen and scientists alike was that the boom was caused by one of three theories: a lack of predators, particularly caused by overfishing of cod, which traditionally prey on baby lobsters; increased proliferation of kelp — where baby lobsters could hide — due to an overharvesting of sea urchins (that feed on the kelp); or warming water temperatures caused by global warming, as evidenced by the earlier times in which lobsters were molting (shedding their shells, which is accelerated by warm water).

In addition — to support the third theory — lobsters were going through early maturation. Females that had usually only bred once they were of legal size were now breeding up to seven times in their life cycle.

In 2017, the overall amount of lobsters caught in Maine dropped 16.4 percent — from 132 million to 110 million. Another drop like that in 2018, White says, can really “spell trouble” for the lobstermen.

White likens the situation to what happened in the Long Island Sound in the ’90s when that area was enjoying a lobster boom before things went south beginning in 1999 — and then seemingly disappeared. Up the coast, Connecticut had a similar situation in 2013 when the state reported that 11 million lobsters died in one summer from what was essentially heat stroke.

Although many coastal states in the Northeast have suffered from this domino effect of losing lobsters, there has always been a collective belief among lobstermen that the waters off of Maine are impervious from temperature spikes because of their natural chilly state — but now some are not so sure of that sentiment.

Over the years, the sweet spot of lobstering, White says, has moved approximately 160 miles north from Casco Bay, near Portland, up to Penobscot Bay.

Still, based on the time he spent with those in the lobster industry, White does not see those in it changing professions anytime soon.

He says the main reason people do the job is “the love of the life.”

“It is beautiful to be out there on a lobster boat at dawn when the sun comes up,” White says. “So, that is a real attraction for most of them, I think.”

Secondly, most lobstermen and women are the sons, daughters and grandchildren of former lobstermen who have been on a boat roughly since they were four or five years old. Lastly, the job remains highly lucrative, with some in the industry who venture far into the ocean pulling down more than $500,000 a year.

However, there is a collective fear, White observed, that one day the lobsters simply will not be there — even though most in the industry do not want to talk about the topic.

“What they worry about is going out one morning in their boat and picking up their traps and finding them empty,” White says. “And so I think that the older lobstermen that are 50, 60, 70 years old, they're talking about trying to lobster through the end of their lifetime or until retirement, but they're worried what's going to happen to their children and grandchildren, whether there are going to be enough lobster to fish.”

The subject of global warming draws a mixed reaction — just as it does among the American public — among those in the lobster industry, White says. Some deny it. Some embrace it. Some have begun to diversify their portfolio by starting up sea farming and raising oysters, scallops, mussels, clams and other profitable mollusks. Some hope the dip in the numbers is just part of the crazy ride they signed up to ride many years ago.

“They don't want to believe that it's a bigger problem than that,” White says, “but the evidence is starting to come forward that it is a more serious consideration, and that global warming and ocean warming specifically are behind the problem.”

Given that lobsters are so iconic to Maine and one of the chief drivers of tourism dollars, White asked those he spoke with about the idea of limiting the catch and the exportation of lobsters to balance out the falling trajectory.

“There have been many debates going on among lobstermen to decrease the number of traps they have in the water, but they won't cut back,” White says. “They will not cut back.”