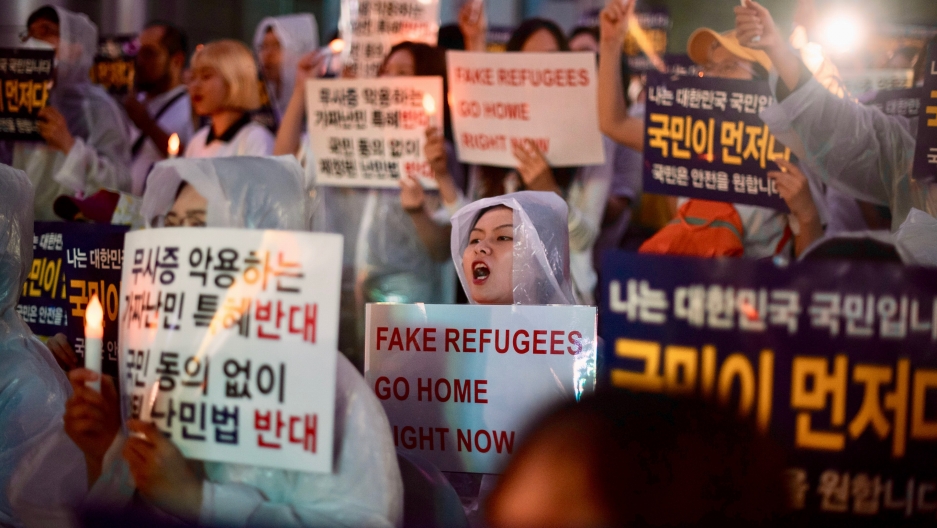 Anti-immigration activists attend a protest in the South Korean capital of Seoul on June 30, 2018. They were protesting against a group of hundreds of Yemeni asylum-seekers who arrived on the South Korean tourist resort of Jeju Island in recent months. The refugees fled war and a humanitarian crisis back home.

Hundreds of Yemenis fleeing the war and humanitarian crisis back home have made their way to an unlikely destination in northeast Asia. The popular tourist destination of Jeju Island sits off the southern coast of South Korea. It’s more than 5,000 miles from the Arabian peninsula, but a combination of factors have led these war refugees to seek safety there. Se-woong Koo has been following the story from the South Korean capital, Seoul. He is the publisher of Korea Exposé, an online magazine that has reported on the situation in Jeju. The World talked with Se-woong about the refugees from Yemen and how they’re being viewed by South Koreans and their government.

The World: First, why have so many people from Yemen gone all the way to South Korea to seek refuge and safety?

Se-woong Koo: Well, it's quite a stroke of luck really. Based on what I have heard, many of them actually ended up in Kuala Lumpur, Malaysia. They were searching for a safe destination in a country that has signed onto the UN Refugee Convention, and many of them realized that South Korea happens to be one of those countries. On top of that, there was a direct flight opening up between Kuala Lumpur and this island of Jeju, starting back in December. Jeju also happens to be a place that allows tourists from many different countries to enter and stay for up to 30 days without a visa. So, in a way, it was a perfect destination for these Yemeni refugees.

How have they been received in Jeju?

That's where things start to get a little difficult. In fact, between January and May of this year, there were a lot more Yemenis arriving than in the past. Although, it is not such a big number, considering that we're talking about 552 people. Some of the locals [in Jeju] have been very hospitable and accommodating. They have been providing lodging and food. Also, some of the expat community on Jeju have been trying to help out by providing supplies. But at the same time, we have seen some very unfortunate events involving locals who would rather see these Yemenis leaving. There has been a protest and the Yemenis themselves have expressed a feeling of being less than welcomed by the locals in the last several weeks especially.

With Jeju being a tourist destination, I'm assuming these Yemeni refugees want to head to Seoul to work and live. Are they able to do that?

That's absolutely correct. Many Yemenis say they would like to be somewhere other than this island, preferably a place that offers them more opportunities to make a living. It was possible for some time [to travel to Seoul], but recently the government decided that it would be in the country's best interests to actually prevent these people from leaving the island. So, many of the Yemenis have been stopped there. That's really a source of contention within that community, but also among South Koreans who would not like to see refugees spreading across the country.

Se-woong, you wrote an editorial in The New York Times about South Korea's reluctance to accept refugees and its tendency toward xenophobia. What's that all about?

That’s what is so interesting about this situation. If we counted the Yemenis who have applied for asylum here going back to the end of last year, we're only really talking about 1,000 people here. But because of this very small group, we have seen a real outbreak of xenophobia and racism in this country. It goes to show that South Korea has never really been comfortable with the idea of living with people who are not Korean. It's also very interesting to note that Korea has never, in fact, received many refugees and the success rate for people who apply for asylum in South Korea is incredibly low.

Is there sort of a cultural barrier or historical reason why many South Koreans are so reluctant to accept refugees?

After I wrote the piece in the Times, I heard from many South Koreans who would say something like, ‘Well, Korea is not a reason that these people became refugees in the first place. Korea was not a colonial power. Korea did not invade other countries. So, why should Korea be responsible for these people?’ But in reality, what we really need to think about is how Koreans have been educated to think about foreigners for a very long time. This is a country where schools taught students to believe that Korea is a single-blooded nation that has experienced many invasions by foreign powers. So, the thinking goes, it is really in the best interest of the population to try and keep outsiders away as much as possible.

Have many Yemenis been accepted in South Korea? For example, is there a Yemeni community in Seoul?

Yes, there is a Yemeni community in Seoul and that is the reason why the Yemenis on Jeju Island say they would rather travel to the capital, because not only is it a place that offers more employment possibilities, but it's also a place where they can really find some kind of community support. But overall Yemenis are not a very visible group here in South Korea. And I have to say that there are not many communities of foreigners in South Korea as a whole.

What reasons do those South Koreans who oppose accepting Yemeni refugees give as the basis of their objection?

They say this is a conflict [in Yemen and the Middle East] that is taking place very far from here [in South Korea] and that it is really the responsibility of the countries that are near Yemen to try and address the refugee situation. They also say that Europe — and Europe is a word that comes up a lot here — has been responsible for colonizing other countries and also being directly responsible for conflicts in different parts of the world. They say it’s natural for Europe to try and accommodate refugees. Another thing that comes up very often here is the possibility of cultural conflict, and in addition, there seems to be a significant amount of Islamophobia here. People say Islam is a religion that is simply not compatible with Korean society. They also say Muslims could come and potentially endanger the safety of the South Korean public.

Is this situation with the Yemeni refugees prompting some soul-searching among South Koreans? Is it a moment when people are questioning their attitudes?

This is what I find so tragic about this whole situation, because what I have just explained seems to be very much the mainstream opinion here. Back on Saturday, there was a demonstration [in Seoul] against refugees. It was quite small, with about a thousand people, but they were expressing xenophobia, Islamophobia and racism. This very much constitutes mainstream opinion here. It is what the public wants and they say the government really should listen. Another thing to mention is the fact that this opposition to refugees or immigrants as a whole is much higher among young people than it is among the older generation. People in their 20s and 30s are much more hostile to having foreigners here. So that's a very interesting thing to point out, I think.

At this point we don't know what's going to happen to these 500 or so Yemenis on Jeju Island, do we?

Well, it's true. But the government here has been inclined to abide by what it sees as the will of the people. They listen to what the public wants. And right now it's clear that the majority does not want to see refugees staying [in South Korea]. I expect the government policy will follow suit.

Is South Korea under any pressure from international organizations or the UN to be more open to refugees and migrants?

I don't think there has been any attempt by the international community to reason with the South Korean government. That was partly the reason why I wanted to write this piece, so that there would be more attention paid to the plight of the Yemenis in Jeju. After all, we're really only talking about 1,000 refugees, 552 who arrived between January and May of this year, and if we count those Yemenis who applied for asylum up until the end of last year, it really is about 980 people. I really wonder what it means if South Korea cannot accommodate such a small number of people who are seeking help. If it does not, it tells us a lot about the state of this country.