Selcan Görgün takes a photo of herself in front of Pride celebrations at Mis Sokak in Istanbul. She says that she posted a photo of herself at the event on social media, and the positive responses she received from friends of all orientations made her feel hopeful about the future.
Credit:

In Istanbul, rainbow flags fill the air, and the streets are packed with around a thousand protesters who are singing and dancing — with glitter on their faces. The street is small and cramped, but the atmosphere is celebratory as sounds of whistles and ululating fill the air. A girl kisses her girlfriend in front of a rainbow and the crowd cheers.

Above the crowd in a small café, a smiling and laughing woman takes a selfie in front of the jubilant protesters. Her name is Selcan Görgün, a 27-old IT expert and a trans woman. She, like many of the people attending Istanbul Pride, is risking a lot for that photo. Pride has been banned for four years running in Turkey, and the ban has turned what was a celebration into a protest. Every year the police come armed with tear gas and rubber bullets to clear the protesters, yet every year the protestors return.

Even as Görgün is surrounded by cheers, chants and music, just up the street from her a line of riot gear-clad policemen and massive trucks wait. A last-minute negotiation between activists and police bought the protest about an hour and permission for about 100 people to gather.

But as the number of protesters swells and the event shows no sign of dying down, the police begin to close in. Hundreds of men in riot gear gather behind the protesters, pushing them farther into small side streets. The protesters try to stick together, still singing and chanting, “Don't be quiet, shout out that trans women and men exist.” Then the police begin to release the tear gas. Görgün, who had followed the crowd, starts to run.

For trans women, Pride is one of the only opportunities they have to express themselves openly in a country that is becoming increasingly more difficult for them to live in. For Görgün, the concept of pride is fundamental in a way that goes beyond the event itself. She only started to transition last year. The decision cost her relationship with her mother and her job at an IT firm, but it also saved her life. 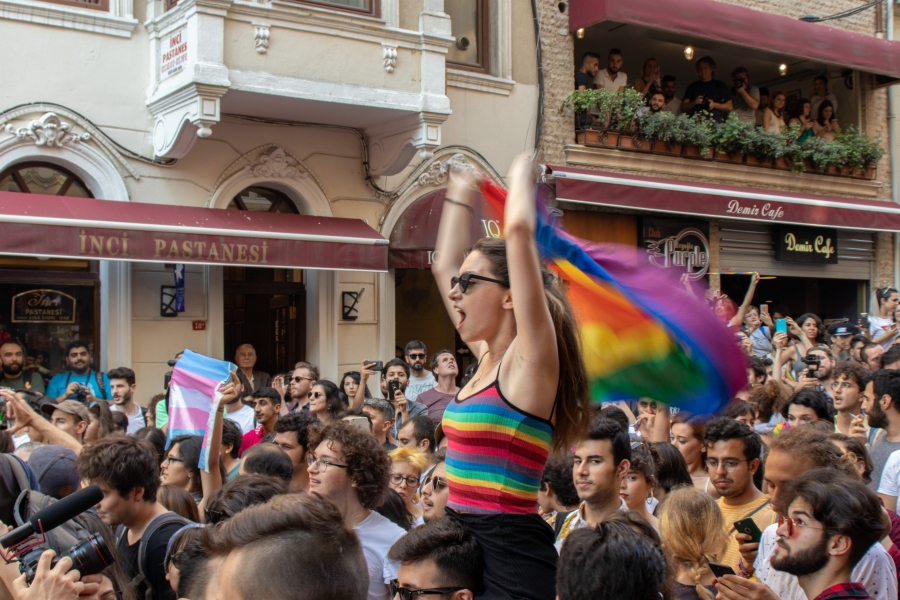 A young woman holds up a rainbow flag at the beginning of Pride celebrations at Mis Sokak. Police only granted protesters one hour to occupy the street, after which point they cleared the area and prevented activists from gathering in other locations.

Now she says when she wakes up in the morning she feels like a queen. “Every day I am looking at the mirror, ‘OK, I am beautiful,’ and that’s it. That’s how I make my day,” she says, laughing. But then she sobers: “I am trying to be positive because you cannot control everything. … That’s how you survive.”

Turkey is a difficult place to be a trans woman: According to data collected by Transgender Europe, Turkey has the highest incidence of trans murders in Europe. This past year has been particularly difficult for the LGBTQ community, who increasingly feel that their government is trying to ban their public presence. Last week, the office of a prominent LGBTQ rights organization was attacked, and when the police were called they obtained a search warrant against the activists before detaining the attackers. In November 2017, the Turkish capital Ankara banned all public LGBTQ events to “protect public security.” 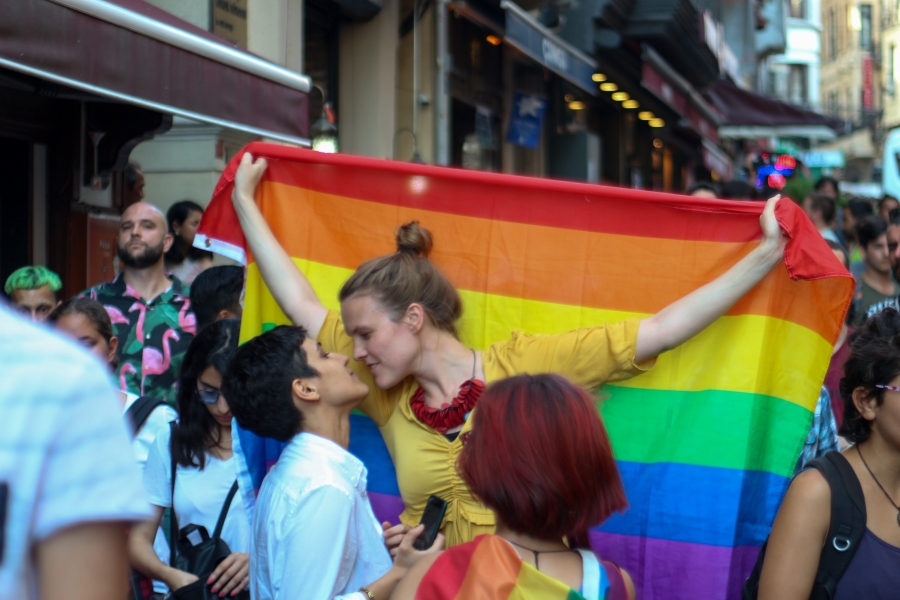 Two women kiss in front of a rainbow flag in the midst of a thousand strong protest for Pride.

When Pride was banned for the fourth time this year, it did not come as a surprise. But the ban has fundamentally changed the shape of the march. An event that in 2014 drew around 100,000 people, packing the city’s mile-long main avenue from end-to-end, has fundamentally shifted over the past three years, turning from a celebration to a protest for those willing to risk beatings and arrest.

Police in riot gear block the end of Mis Sokak, a side street famous for protests in Istanbul

These changes have followed a larger wave of rising nationalism and conservatism under the leadership of President Recep Tayyip Erdoğan — who was re-elected on June 24 on a controversial election that gave him sweeping powers and a five-year term in office. His re-election came as a blow to many in the LGBTQ community — particularly trans women who already bear the brunt of discrimination in Turkey.

Özge Tekin, who asked that her name be changed to protect her identity, is a 26-year-old trans woman and student. Things have changed after Erdoğan’s re-election, she says.

“I don’t feel like I am a citizen of this country. I legally am, but when we look at his discourse — what I am and what I value is always excluded,” she says.

As an example, Erdoğan stated that a local municipality was “going against the values of the nation” when it instituted a pro-LGBTQ policy one year ago.

“The first-class citizen, if you will, is now Sunni-Muslim-Turkish kind of conservative people, not the ‘marginals,’” Tekin says. She says that she believes that this rhetoric has resulted in increased violence towards LGBTQ people — especially trans women.

Trans women often face even more difficulty finding work and face discrimination in their workplaces, leading many to turn to sex work as the only field where they can make an income. This means they are often in public, open spaces that make them easy targets for violence and discrimination.

“You need some sort of visibility as a sex worker, and that makes you vulnerable,” Tekin explains.

A policeman walks towards Pride protesters with an attack dog. The police used dogs, tear gas and rubber bullets to disperse Pride this year.

But even if, as in Tekin’s case, you do not engage in sex work — being an identifiably trans woman in public can pose a risk. Tekin recalls an incident where a man started pointing to her on the metro, giggling and whispering to his girlfriend, “Trans, she’s trans.” The man was large and Tekin says she started sweating out of fear.

“I wanted to shout and say this guy is actually harassing me, because that’s harassment, but I immediately also thought nobody would care,” she says. “Personally, I am increasingly more concerned about my security in Turkey.”

Tekin initially was not going to attend Pride this year — she was too afraid. But at the last minute, she changed her mind. She came to the same café balcony as Görgün, wearing rainbow earrings and cheering with the crowds around her. But her fears are not unwarranted. Once the police begin to disperse the protest, things become violent.

The police pursue the protesters with gas, dogs and sheer numbers. They begin to arrest one or two, seemingly at random. As one woman is dragged away, the police manhandle and push her. Görgün’s eyes fill with tears as she watches. “It’s too much,” she says. “I don’t know what to say. It was really bad. It was peaceful, but then the police came and the violence began.”

A man holds up a rainbow flag as the crowd protesting Pride is herded out of Mis Sokak by police attempting to disperse the protest.

Leaving the march, Görgün is shaken, but still standing tall.

“I felt proud, I felt that I am glad to attend this march, I felt fear, and I felt scared,” Görgün said.

She says that Pride is worth the risk, the arrests and the tear gas. Sitting on a rooftop in Istanbul, sipping a beer, surrounded by tired but proud activists, she says that she will keep going to Pride.

Görgün is practical; she has no faith that the government will change. But she says that keeping visibility alive will change things for the new generations to come.

“For them, it should be forbidden forever. So they are not going to change. But the society is going to change, slowly but surely. More people will come. The new generation is the source of our hope.”