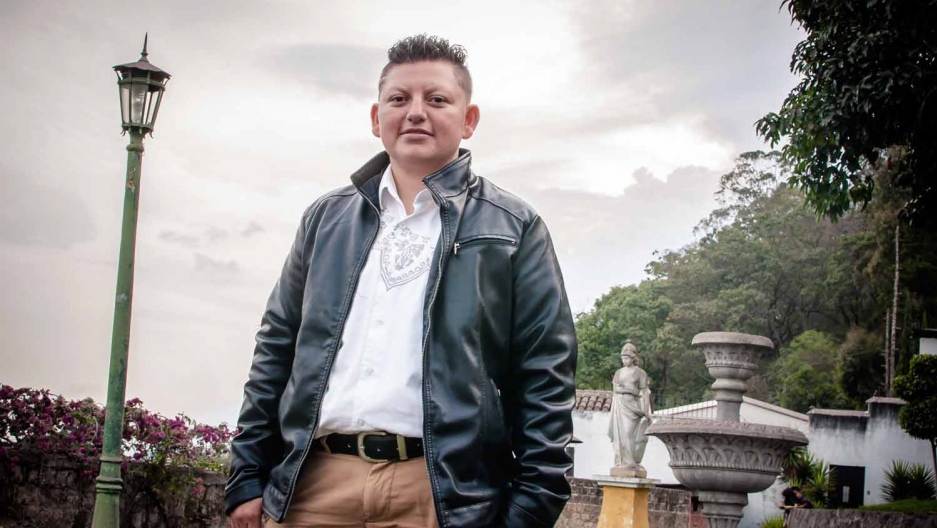 Baner Morales stands in a square in Antigua, Guatemala, where he lives.

A few months ago Baner Morales went to the bank. He saw a couple acquaintances, said hi, made small talk and cashed his check. Later he learned that rumors were spreading about him.

One of the employees at the bank who knew Morales had gossiped to a colleague, revealing that Morales is a transgender man. The two employees went through his file and found his identification that still indicates female despite Morales’ male appearance —  the gender he identifies with.

Morales would like to have his name, sex on his identification, and appearance match so that he isn’t vulnerable to this kind of discrimination. But legally he can’t do anything about it. Guatemala does not allow transgender people to change their sex on their legal documents.

In fact, Guatemala is a dangerous country to even identify as trans. According to a study by the Ministry of Public Health 71 percent of transgender women in Guatemala report being victim to discrimination, 60 percent have reported physical abuse and 61 percent earn less than minimum wage. Another study by the organization noted that as many as 70 percent of transgender people say they were kicked out of their family homes.

Despite the prevalence of violence and discrimination of transgender people in Guatemala, there are few legal protections for the LGBTQ community. However, there is currently a proposed bill that would allow trans people to change their sex on their identification in accordance with their gender identity.

One organization, Asociación Lambda, is working toward improving the situation through LGBTQ sensitivity training. The federal prosecutor's office contacted the organization to train government employees and police about human rights for the LGBTQ community. For many government employees, this is the first time they'll encounter these issues. So far, Lambda has trained a little more than 800 people all over the country in four years.

'It was my job to explain'

Morales was shocked when he heard that people from the bank were gossiping about him.

“I was so angry,” Morales said. “I want them to respect my integrity. If they can do this to me, what’s to stop them from doing this to other people?”

Morales decided to file a criminal complaint for invasion of privacy. He went first to the office of human rights and then was sent to the federal prosecutor's office.

“They [the federal prosecutors] don’t know what a trans man is so it was my job to explain it to them,” says Morales. “And they asked me if a trans man is the same as a lesbian, or if I’m a man that wants to become a woman.”

Humiliated but undeterred, Morales explained what gender identity is and asked to file the report against the bank. But the employee at the prosecutor’s office told him he didn’t think a crime had been committed.

“I told him that they went through my personal information. That’s a crime” Morales said.

In a conference room in Guatemala’s capital, Carlos Romero Prieto, a Lambda instructor, asked a class of 21 adult government employees to introduce themselves one at a time — their name, where they're from and something about their sexuality.

The class instantly dissolved into awkward laughs and uncomfortable silences as they each took turns. Everyone laughed as one woman admitted she wasn’t sure what sexuality means. When one participant proclaimed himself as a man who likes men, the whole class loudly applauded. 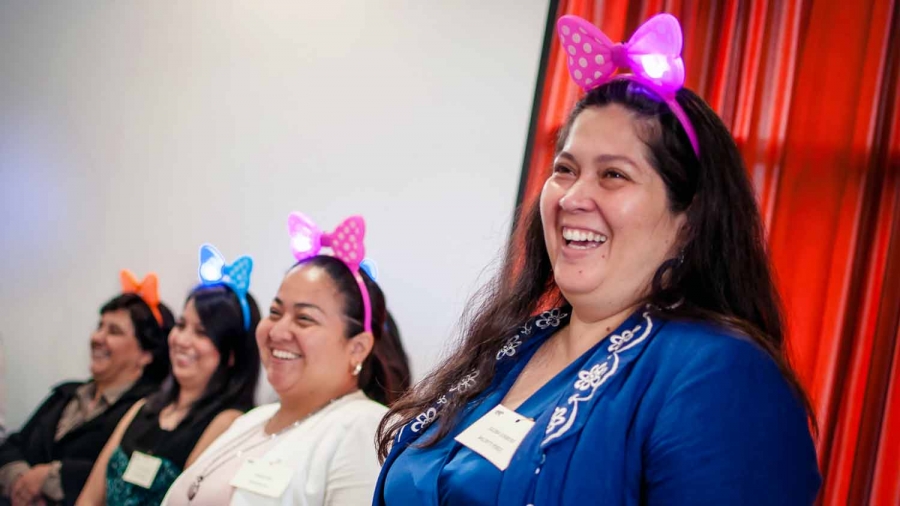 The training session attendees are split up into two groups; aliens and earthlings. The extraterrestrials wear light-up headbands and know nothing about humans and must ask the earthlings to explain human beings — sexuality and all.

The students took a preliminary test on gender identity and sexual orientation to get a base level of the class's understanding of LGBTQ issues. Turns out, they didn't know much.

Sofía Crosta works for the attorney general’s office investigating child abuse. She also participated in the Lambda class. When asked what she understood about gender, she wrote “it is the difference between men and women.” And under the question asking what she understands about sex, she wrote: “human attributes that differentiate men and women.”

Crosta had never learned about LGBTQ issues before — not at school nor at training for her job. But this classroom was a safe space for questions.

One person asked if it is possible for a transgender man to get pregnant. Another struggled with the difference between gender and sex. And another trainee raised her hand to ask what “queer” means.

Romero, the instructor, projected the music video for Queen's “I Want to Break Free” onto the wall. People danced along in their seats as he talked about how the music video celebrates queer identities.

It wasn't all fun and games, though. To drive home a point about LGBTQ lives being in danger in this country, Romero played a grainy surveillance video that shows two men sitting in a bar in Guatemala holding hands. A man walks in, pulls out a gun and shoots them both point blank. Romero explained that this is the type of violence that LGBTQ people face all the time in Guatemala and much of it goes unreported because people often feel stigmatized at police stations and in government offices.

Romero declared that queer people shouldn't be in danger just for holding hands, being themselves and walking down the street.

But one student pushed back. He's the one who proclaimed he's a man who likes men in the beginning of the class. But he disagreed. He said he's gay but he keeps his sex life behind closed doors. He blamed queer people for inviting attacks by acting "ridiculous" in public.

“Sorry for the interruption but that’s where society doesn’t see things correctly. For example, I’ve shared with many people and everybody has respected my life and my sexual orientation. How am I supposed to succeed? By behaving myself,” the student said.

This is the kind of mentality Romero is working to correct, especially from government employees. Romero explained to the class that this kind of sentiment is unfortunately common in Guatemala among the queer community. 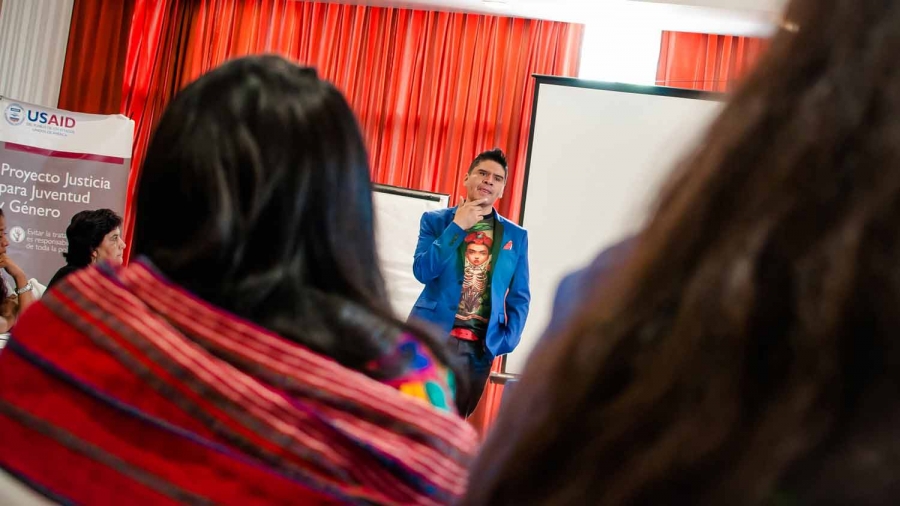 Carlos Romero, a gay man, talks to the attendees about different sexual orientations.

“I think it’s a defense mechanism, trying to be the correct gay, the white, middle-class gay that behaves himself. But we have to legitimize that any kind of expression is good, that all forms of expression also come with the guarantee of human rights,” Romero said.

He said it’s an uphill battle and things won’t change overnight but hopefully, little by little, these lessons will stick and it’ll get easier for the LGBT community.

“Whoever wants to put on a costume and walk down the street with cymbals and a big bass drum screaming that I’m a queer, I’m a queen, I’m a fag, I’m a nancy, they should do it,” said Romero.

Baner Morales, the transgender man who felt wronged by the bank, isn’t looking for a parade — but, with the help of Asociación Lambda, he is pushing for the right to file a criminal complaint against the bank.