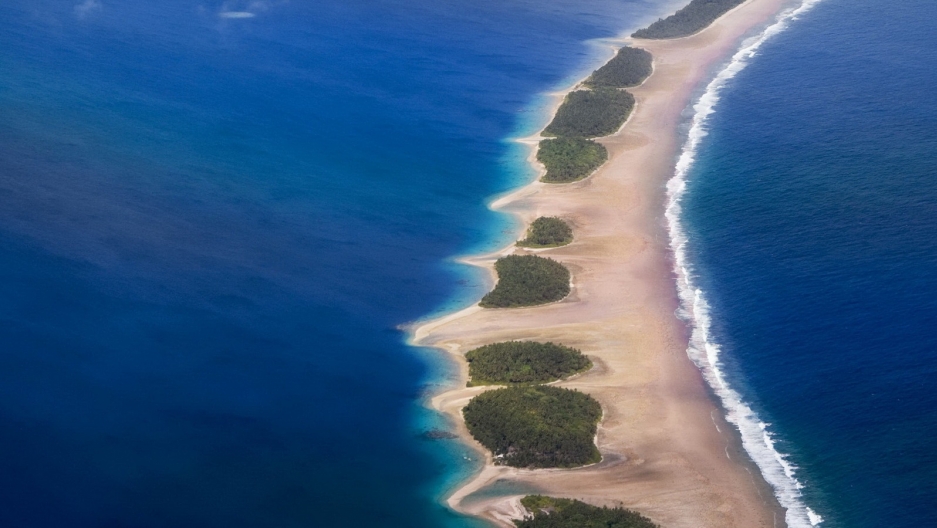 The Marshall Islands are made up of an archipelago of islands that sit not that far from the current sea level, as evidenced by this photo of the Jaluit Atoll Lagoon. A new documentary, “The Last Generation,” tells the story of the island’s past and present through the eyes of three children — who all think deeply about its future.

Nine-year-old Izerman calls his home, the Marshall Islands, "the only place that I would ever live in if I had to choose.”

That line could come from any one of the approximate 25,000 people under the age of 18 who live there.

Izerman is one of a trio of children from the islands featured in a project from Frontline, the PBS documentary series, called “The Last Generation.” Made in conjunction with The GroundTruth Project, the documentary chronicles climate change through a series of interviews and recollections with Izerman along with 14-year-old Julia and 12-year-old Wilmer.

Worth says Mizner had read about how the children of the Marshall Islands were highly knowledgeable on matters relating to climate change, given how much their homeland sits in peril.

The archipelago nation is comprised of low-lying islands in the middle of the Pacific Ocean. A majority of the country’s capital city of Majuro sits less than six feet above sea level. A recent study funded by the US Department of Defense showed that just 15 inches of sea level rise could cause annual devastation to the islands.

“That intrigued us. What would they tell us?” Worth says of the children. "How well do they really understand? How do they think about their futures on this island that literally may no longer exist within their lifetime?”

What Worth and Mizner found during their time on the islands was a group of people mostly determined not to abandon their homeland — and will do anything to adapt and stand their ground against anything Mother Nature throws at them.

“What is habitable to one person isn't habitable to another,” she says. “One community might be willing to live with devastating annual floods, and another community would not. But what we do know is the Marshallese have found ways to live on these islands for 2,000 years, and in an environment that most people would describe as extremely isolated and unforgiving. So, they are looking for ways to adapt.”

When it comes to dealing with the growing issue of saltwater intrusion in their drinking water, the Marshallese are collecting more rainwater for drinking purposes, Worth says. For agricultural purposes, they have begun raising their vegetable beds about a meter or so.

“People who live on these islands are resourceful, and they're thinking deeply about how to survive there as long as possible,” Worth says.

The Marshall Islands have a long history with the United States. The islands fell under US control in 1944, during World War II. Two years later, because of the islands' relative isolation from the rest of the world, the US began testing a series of the nuclear bombs in the islands' Bikini Atoll at the start of the nuclear arms race with the Soviet Union. The testing finally ended in 1958.

The Marshall Islands were officially granted independence in 1979 through a document known as the Trust Territory of the Pacific Islands — with the understanding that the islands would still be allowed access to US government agencies, services and monetary aid. The country still uses the US dollar as its currency.

The nuclear testing caused many Marshallese to be displaced from their homes in the Bikini Atoll. That includes the family of Julia, one of the three children featured.

“I feel alone and sad because Bikini people are not there at their own land, and we are borrowing someone's own land to live,” she says. “It's like homeless, yeah. If we move from here, I will be embarrassed, sad, angry and mad. I think it might happen, because people are not listening.”

Those who are not listening includes the United States, especially after President Donald Trump announced last June that the country — the world's second-biggest emitter of carbon dioxide after China — would begin the process of pulling out of the Paris climate agreement.

“That's not lost on the Marshallese,” Worth says. “There's a very interesting historical touchstone for the Marshallese of being displaced. They've already experienced displacement, and it's a really sensitive issue for them. It's caused multi-generational trauma for them, and so when they think about being displaced again, again by forces that are out of their control, they can grasp what that will look like for them and the pain it will cause generations of their people.”

As part of the reparations for its past transgressions, the United States has always made it very easy for the Marshallese to immigrate to the United States. It remains easy today, even with the recent amplification of anti-immigrant rhetoric. Yet Worth says she did not speak to one person during her time on the islands who wanted to move to the US.

Instead, many of them shared the sentiment of one of the children, Wilmer, whose biggest goal is to become president of his homeland.

Leading up to the Paris Agreement, the president of the islands at the time, Christopher Loeak, gave an impassioned speech to the United Nations delegation.

“‘Everything I know and everyone I love is in the hands of those of us here today,’" Worth says, recounting Loeak’s words. “He said that at the meeting in Paris. That led to the Paris accord. It's their home, it's their culture, it's the best. For them, it's the only place they want to be.”