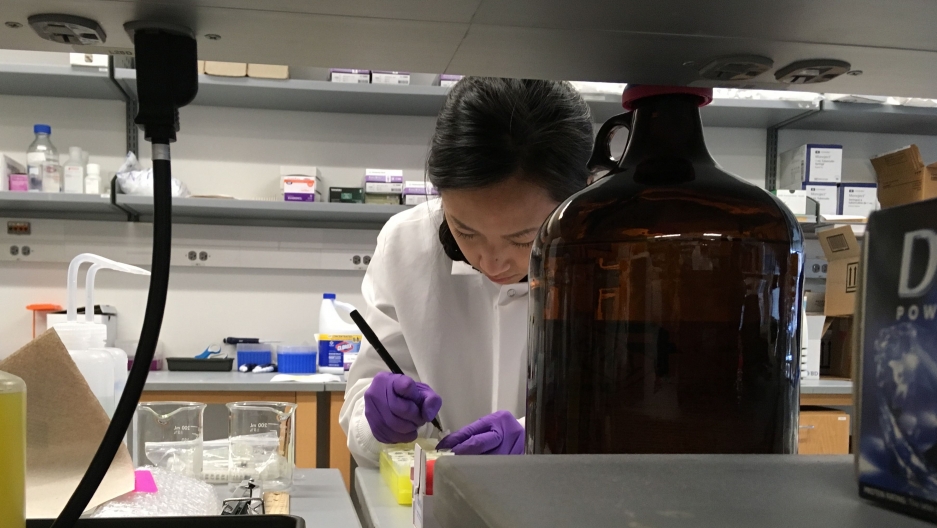 Pajau Vangay strides with purpose through a University of Minnesota science laboratory wearing a white lab coat and purple, synthetic gloves. She has a big experiment planned for tomorrow and is injecting Kool-Aid-colored chemicals into clear tubes. Vangay needs to be precise and also organized. If she forgets something or makes an incorrect measurement, it could throw off the whole experiment.

Tomorrow, she will dissect a batch of sterile mice whose tissues will be plunged into liquid nitrogen and examined for gut inflammation. Vangay, a doctoral student in bioinformatics and computational biology at the University of Minnesota, is part of an emerging cadre of scientists who study the microbiome — a constellation of microbes, fungi and bacteria that live in and on our bodies, including our intestines.

“It's considered a second organ ... because it's so important,” said Vangay of the gut microbiome, which is close cousins with our immune system and keeps us healthy by breaking down foods and fighting infection. “They’re kind of our buddies.”

Related: These female marine scientists have a message for girls: Sharks aren't just for boys

The health of our guts is shaped by the environments we inhabit, including the air we breathe and the food we eat. But what happens when those things change very suddenly? Vangay and her University of Minnesota research colleagues have tried to gain insight into this question through the Immigrant Microbiome Project, a study focusing on groups typically overlooked by scientific research — in this case, hundreds of Hmong and Karen women living in Minneapolis and St. Paul, Minnesota, and Thailand, including first- and second-generation immigrants to the US. 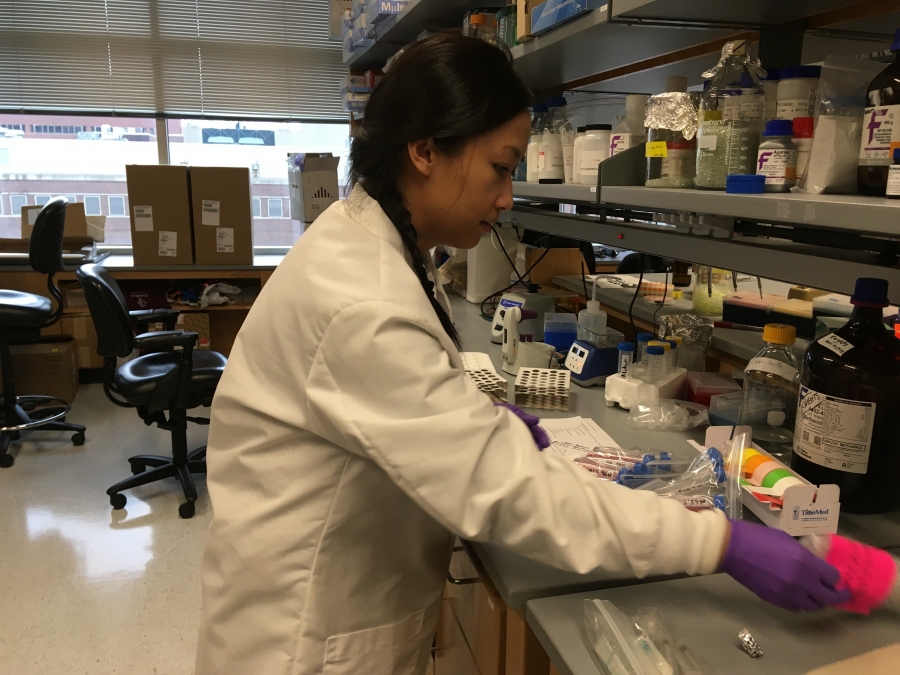 “Immigrants and refugees are coming from extremely underdeveloped or non-Westernized places, and they're getting plopped over here,” said Vangay, who is Hmong and moved to the United States from France as a child.

“We know that many immigrants and refugees who move to the US come down with a lot of different chronic diseases. A lot of it stems from things like obesity and goes on to heart disease and diabetes. And a lot of people would say that's just because their diets changed or they're not as active ... and if they just changed that, then they'd be fine,” said Vangay. “But since this is a microbiome lab, we think that maybe the microbiome could provide a different window into what's going on, or it could even be a causative factor in shaping how those chronic diseases develop.”

For Vangay, the Immigrant Microbiome Project isn’t just about advancing scientific discovery in an ivory tower lab. It’s about social justice and making science more inclusive. “A lot of times, these studies are not reachable by [immigrant] groups. It's more affluent and educated folks that are even aware of the microbiome. ... It’s adding this diversity component.”

If you’d told Vangay a decade ago that she would be injecting sterile mice with human stool samples and on the precipice of completing a doctorate in bioinformatics and computational biology, she might not have believed you. Back then, she was working in Silicon Valley and earning a very good living as a software engineer, writing what she calls “pretty code.” But Vangay was restless. With multiple degrees in computer science, she yearned to solve difficult math problems like the ones she had tackled as a student. Vangay also wanted to use her computational and computer science skills to make a bigger impact in the world.

A love of baking led her to the book, “On Food and Cooking: The Science and Lore of the Kitchen,” which inspired her to take an organic chemistry class. This class, combined with international service trips to rural agricultural communities in Thailand and Nepal, had her mulling a career change, and soon she was researching graduate programs in food science. One professor cautioned that it was too late and she should stick with computer science. “I bawled my eyes out,” she said of that discouraging moment. But Vangay was undeterred. By 2010, she was accepted into a master’s program in food microbiology at Cornell University.

At Cornell, she stumbled on a lecture by Dan Knights, a University of Minnesota computational microbiologist, and a path forger in the relatively new field of microbiome research. As she heard Dr. Knights talk about his work, Vangay was blown away by his use of computer science to investigate human health problems. “It was really the first time where I thought: ‘This is where I belong.’” In 2013, she moved to Minnesota and joined Dr. Knights in his lab as a doctoral student. 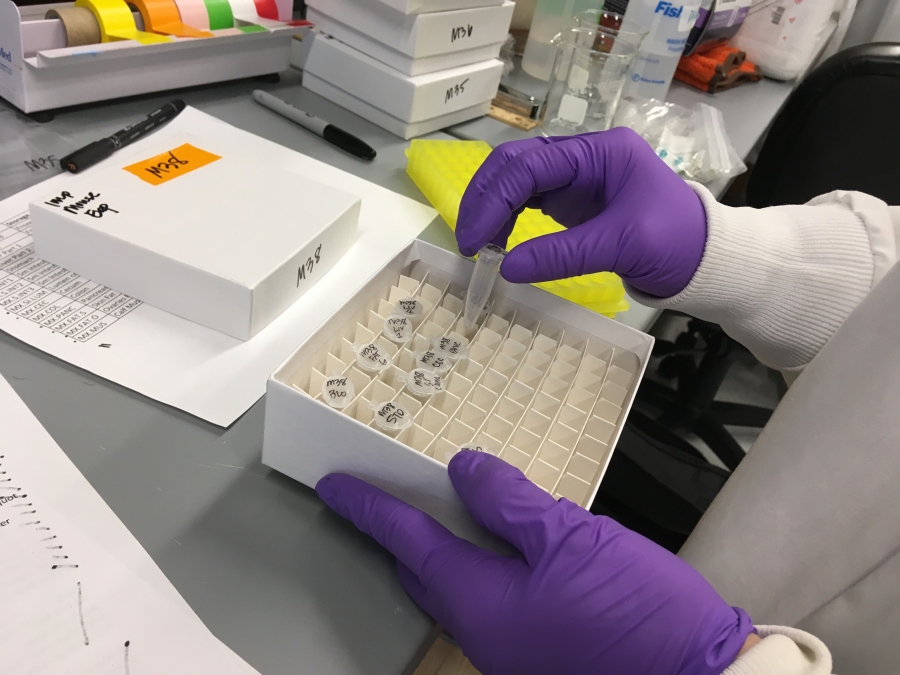 Pajau Vangay, who studies the microbiome, prepares for a big experiment.

In the mid-1970s, thousands of Hmong began migrating to the United States as refugees of the Vietnam War, and many settled in the Twin Cities. According to the Pew Research Center, there are roughly 300,000 Hmong currently living in the US, with an estimated 66,000 residing in the Twin Cities metro area based on 2010 US Census records.

For Vangay, who grew up in California and Colorado, the experience of being around so many Hmong people was novel at first. Even shopping trips to Target where it was normal to see large clusters of Hmong shoppers and workers in one place astonished her. “I was just not used to that at all,” she said.

But even in Minnesota, as a Hmong woman pursuing a doctorate in applied science, Vangay is an outlier. She hasn’t had mentors in the sciences who look like her. “It has sort of been like that my whole life,” she said. “I was going [down] this path that not a lot of Hmong went. And I was OK with it because I had to be.”

She describes Hmong culture as patriarchal. Girls of her mother’s generation didn’t traditionally attend school and were raised to cook and do chores in preparation for becoming a model daughter-in-law. But Vangay’s mother always emphasized education and not relying on a man. “She supported my education, even though she never had one,” said Vangay. “The easiest excuse to not have to do a chore was to say I had homework.” A self-described “math nerd,” she loved solving factorials as early as the third grade.

When Vangay moved to Minnesota to start her doctoral program, she didn’t know how she would connect her applied science studies to the larger needs of the Hmong community, but she was eager to find a way. Meeting family practice doctor and researcher Dr. Kathie Culhane-Pera was the first step. Culhane-Pera has been working in and with the Hmong community in Minnesota and Thailand since 1983 and is a co-principal investigator on the Immigrant Microbiome Project.

Culhane-Pera told Vangay about the prevalence of diabetes, gout and obesity among her Hmong patients. According to a 2010 University of Wisconsin study, Hmong patients face a significantly higher risk of diabetes compared to the general population.

“Our hypothesis was that if you're somehow able to maintain your gut microbiome in the same way that it was before you moved here, then perhaps you're really healthy,” said Vangay, who describes a healthy microbiome as being like a rain forest with lots of diverse microbial inhabitants.

While Vangay is still analyzing the data, she has noticed a decline in gut biodiversity among first- and second-generation immigrants in the study as well as a downward generational trend among obese participants. “Even the most obese person in Thailand still has higher diversity than a lean person here,” she said.

“She [is] an ideal community person who has become an academic researcher,” said Culhane-Pera of Vangay. “This hits the core of how she sees the world.”

But being an academic researcher isn’t necessarily Vangay’s long-term calling. While it’s common for newly minted PhD scientists to do postdoctoral research in a lab, Vangay is curious to explore possibilities beyond academia. She is contemplating a pivot into public policy and is also looking at opportunities in public health. Whatever she does, she hopes it will involve public service. 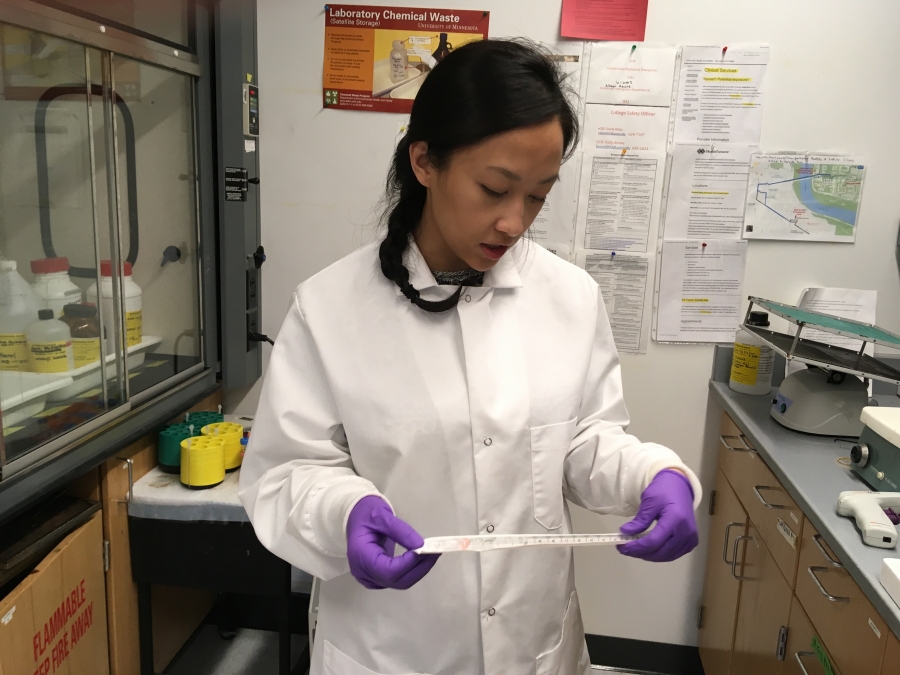 Pajau Vangay, a doctoral student in bioinformatics and computational biology at the University of Minnesota, is part of an emerging cadre of scientists who study the microbiome — a constellation of microbes, fungi and bacteria that live in and on our bodies, including our intestines.

“We can't just sit in our labs and not communicate with the community and not care about all of these important decisions that are made over there. I think that's really where I can potentially make the most impact,” Vangay said of doing policy-related work.

Vangay has become well-practiced in taking leaps of faith and making nontraditional choices. “As you can imagine, there’s a lot of self-doubt because I was constantly throwing myself into fields that I'd never been in,” she said of her trajectory. “I've learned to be OK with that now and to just realize that I can do it.”