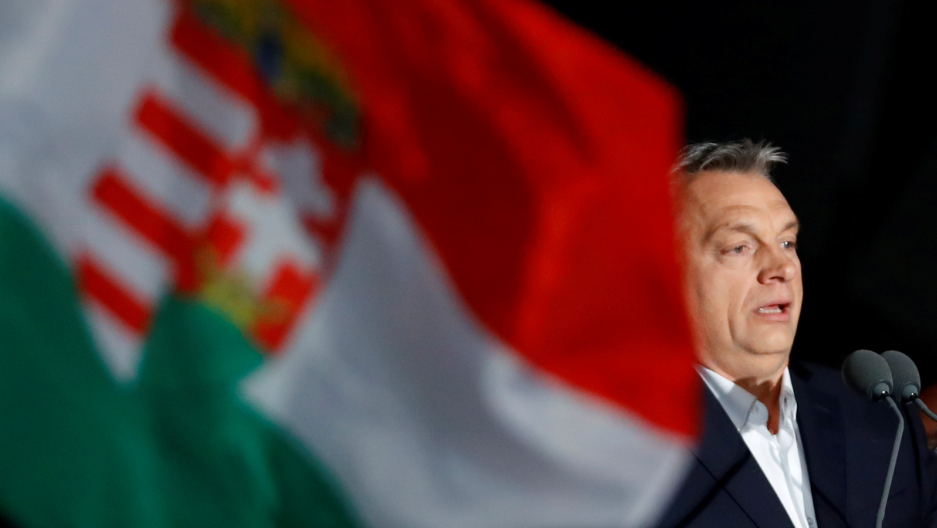 In the latest of attacks against civil society actors in Hungary, parliament on Wednesday passed a controversial package of laws that criminalizes the act of helping undocumented migrants, while also making it virtually impossible for those migrants to settle in the increasingly repressive Central European nation.

Named after Hungarian-born philanthropist and democratic activist billionaire George Soros, the officially titled “Stop Soros” laws target NGOs that are among some of the last remaining critics of Prime Minister Viktor Orban. Their passage — on World Refugee Day, no less — fulfills one of Orban’s key promises made ahead of last April’s general elections, which his Fidesz party won in resounding fashion with a two-thirds supermajority in parliament.

“This strengthened protection is needed because the mass immigration afflicting Europe is continuous, while the Soros network and the pro-immigration policy of Brussels are creating the threat of attempts to also swamp our country with migrants,” the cabinet office of the prime minister said in a statement following the vote. Branded an enemy of the state, Soros has long been the poster child for what Orban terms a failing liberal agenda that is weak on migration.

“Anyone who organizes illegal migration and incites others to circumvent Hungary’s laws shall be liable to prosecution,” the statement continued.

While the laws are being lauded among Europe’s growing populist wing as a victory for nationalism, they have been universally condemned by human rights groups, members of the European Parliament and the United Nations as an attack on fundamental human rights.

They also come despite a direct request from the Venice Commission of the Council of Europe — a major rights watchdog in Europe — to Prime Minister Orban to hold off on the measures until Friday when it was expected to issue an official opinion.

"Criminalizing essential and legitimate human rights work is a brazen attack on people seeking safe haven from persecution and those who carry out admirable work to help them,” Amnesty International's Europe director Gauri van Gulik said in a statement directly following Wednesday's vote. “It is a new low point in an intensifying crackdown on civil society and it is something we will resist every step of the way.”

The “Stop Soros” law passed overwhelmingly with 160 lawmakers voting in favor, with just 18 against.

Aside from raising human rights concerns, the laws have also been criticized by rights groups including the Council of Europe and the Organization for Security and Cooperation in Europe (OSCE) as being arbitrary and vague.

Todor Gardos, an eastern Europe and Balkans researcher at Human Rights Watch, pointed to a lack of a clear definition in the new laws for what constitutes an undocumented immigrant and what it means to aid them.

“It’s really confusing. The proposal criminalizes certain activity but when it comes to who is an illegal migrant only the asylum office can decide that. So when you turn up at the border, how is a support worker supposed to know whether a person is ‘illegal’ or not?” he said.

“This proposal also contains measures to limit access to asylum so even if you try to regularize your status as a migrant, they have made it almost impossible to get any sort of protection.”

Meanwhile, others said that the measures are flatly unconstitutional and would not hold up in countries that have an independent judiciary, which Hungary is accused of not having.

“A lot will depend on how they are implemented because a lot of the provisions are so vague,” Zselyke Csaky, a senior Central and Eastern Europe researcher and a rule of law expert with Washington-based rights organization Freedom House, said referring to how international bodies might handle the new laws.

In addition to possible jail time for individuals and banishment for organizations who aid undocumented migrants, the finance ministry yesterday also introduced a proposed 25 percent “immigration tax” to be borne by NGOs that protect asylum-seekers. It is a provision that was previously on the “Stop Soros” bill but then later removed.

"The defense against illegal migration imposes a heavy burden on Hungary’s budget, so it indirectly affects the Hungarian people," the finance ministry said in a statement on Tuesday.

Prime Minister Orban, who has been in power since 2010, rode a nationalist, anti-migrant platform to secure a fourth term as prime minister, declaring an end to the liberal democracy that has existed in Hungary since the fall of communism.

Critics have warned that Orban has used his long tenure to systemically eliminate the free media and slide the country towards autocracy. In recent years, Orban’s allies have acquired numerous media outlets or cut off independent media from precious state resources, while he and his government have persistently cracked down on non-governmental groups.

Last month Soros’ Open Society Foundations, a civil rights group that funds dozens of non-governmental organizations in Hungary, announced that it would withdraw from the country, citing an increasingly repressive political environment and security concerns for its personnel.

“The government have already captured the judiciary, they got rid of the meaningful checks and weakened the constitutional court’s position. There is a total media capture and what’s left is some NGOs and academia, so that’s who they are going after,” said Petra Bard, visiting professor at Central European University and an expert on EU constitutional law and criminal justice.

Seen as a hero among like-minded regional factions, Orban has taken up the mantle as the de facto leader of the anti-migrant movement and as a staunch critic of the progressive EU agenda in Brussels. Earlier this month he even said he was capable of abandoning the conservative European People’s Party (EPP) Fidesz is currently apart of in the European Parliament of and set up a pan-European anti-immigration party ahead of European elections next year.

But while Jean-Claude Juncker, president of the European Commission has jokingly referred to Orban as a “dictator” over his autocratic policies, experts note that he and his 12 valuable Fidesz MEPs have expertly played an EU institution that has done very little to stop him.

“It is a challenge to the EPP, European conservatives and the whole of the European Union,” said Bard. “Orban recently said he could unite governments against migrants and this was a reckoning for the EPP that he has remained with them up until now.”

With rights groups and observers increasingly worried over Hungary's future, those groups are calling on Brussels to take action against Orban, while a small segment of MEPs in April proposed harsh sanctions. Still, not many are optimistic over the outcome.

“There has been an attempt to put EU mechanisms into place [that protect core EU values] … but it has been problematic as far as the political process goes, so that’s a big issue,” Bard said.

Though the number is steeply declining, the UN estimates that around 40,000 people have arrived in Europe by sea so far this year, but with countries like Hungary, Poland, the Czech Republic and Slovakia unwilling to take in their end of refugee quotas, the union has suffered a crisis of confidence that has seen the ouster of the traditional political establishment, and a sharp rise in populism.

By posing a direct challenge to Brussels, experts also said that Orban’s crackdown in Hungary will continue to embolden other nationalists in Europe.

“Unilateral, uncoordinated measures would not only be less effective, but severely damage the process of European integration,” reads a draft of the statement for Sunday’s meeting.