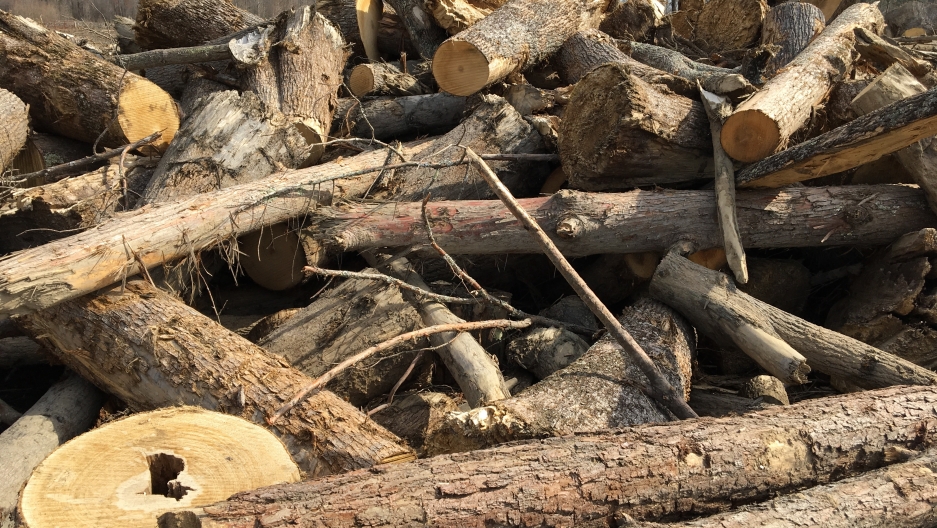 Wood pellets, or biomass fuel, are generally made from sawmill waste and logging leftovers, like this pile at a harvest site in Greensville County, Virginia. But the process sometimes also relies on whole, mature trees, which many researchers say eliminates any environmental benefit to the fuel.

The 12 cooling towers at the Drax Power Station have dominated the flat North Yorkshire countryside since the plant was built to burn coal from local mines in the '60s.

It’s the largest power plant in the UK, and for years it served as a visible reminder of how essential coal has been for the country. But five years ago, Drax started switching from burning coal to burning wood.

“We’ve converted three of our six generators to run on wood pellets,” says Andy Koss, Drax Power’s CEO, while standing in the shadow of four new cathedral-sized storage domes built to store those wood pellets on the sprawling Drax grounds. 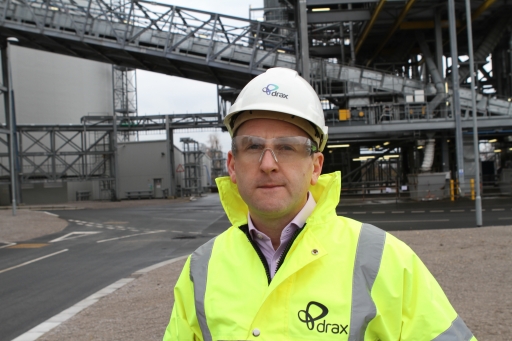 Drax Power CEO Andy Coss at the Drax power plant in Yorkshire, England. The plant was built near local mines to burn coal, but it’s transitioning to wood pellets as the UK attempts to meet carbon emission targets.

Drax started transitioning its units off of coal and onto wood fuel because the UK government is putting tight restrictions on carbon emissions to help fight climate change. This year, the country announced its plan to cease burning coal for electricity entirely by 2025. And under EU law, biomass is classified as a source of carbon neutral energy.

The wood pellets, which are made from compressed sawdust and look like something you might feed a pony at a petting zoo, are burned, just like coal is. And just like coal, that emits carbon dioxide.

But Koss says there’s a key difference. Wood releases carbon when it’s burned, but trees also absorb carbon from the atmosphere as they grow.

“So we have a carbon cycle which ends up as carbon neutral,” says Koss.

This claim that burning biomass is carbon neutral is at the heart of an intense debate that’s pitting environmentalists and scientists against the biomass industry.

But what’s not contested is that biomass has helped keep the lights on as the UK moves away from coal. Wood biomass produced about six percent of the country’s electricity in 2016, and Drax burns more of it than any other power plant in the world. Nearly 20 train loads of pellets arrive at the Drax plant every day, most of them from the United States.

Impact of biomass energy on US forests in question

Some of those wood pellets get shipped to Drax from a plant in Franklin, Virginia. It’s one of seven plants that the biomass company Enviva has recently opened in the southeastern US to feed the growing global appetite for wood pellets.

Jen Jenkins, Enviva’s chief sustainability officer, says about 20 percent of the company’s wood comes as byproducts of industrial processing, in the form of sawdust or shavings. Another 20 to 30 percent comes from logging scraps like limbs and tree tops. About half comes from whole trees that are too twisted or deformed to be used as lumber.

Like Andy Koss at Drax, Jenkins says Enviva’s wood pellets are carbon neutral because forests in the southeastern US have been adding trees since the '50s, and those trees are growing and sucking up carbon dioxide.

“Forest carbon stocks are increasing and emissions are actually being removed from the atmosphere by the forest carbon,” Jenkins says.

But many critics say Enviva’s claims of sustainable sourcing and carbon neutrality are misleading at best.

Adam Colette, with a forest protection group called the Dogwood Alliance, recently walked through a forest of pine, Cyprus, maple and oak in North Carolina, not far from the Enviva plant.

Before long he stopped at a big clearing that’s full of stumps.

“These are old trees,” Colette said. “This is an old forest. I can’t imagine that this is the future of green energy.”

The Dogwood Alliance says it has tracked logging trucks carrying whole, mature trees from this patch of forests and others in the region to three Enviva pellet mills.

Enviva disputes those claims. It says all its wood is sustainably sourced from timber industry waste.

And it’s not like cutting trees, even old ones, is a new phenomenon in this part of the country. Southern forests have been harvested for more than 400 years and have regrown. It’s an important part of the economy.

With the growing threat of climate change though, Colette says forests here are a lot more valuable left alone. And the growing demand for wood pellets is just another incentive to cut them down.

“We are now opening up a pathway to log natural forest ecosystems that would otherwise be let [to] grow and flourish,” Colette says.

That’s because the wood pellet industry has put a value on timber scrap, adding additional financial incentives to logging.

Southern forest ecosystems do a lot for both people and wildlife. But perhaps most valuable today is their role in storing carbon. And on that key point, critics take strong exception to the industry’s claim that wood pellets are a carbon neutral fuel.

“What we found is that contrary to your intuition, burning wood to make electricity in places like the Drax power plant actually makes climate change worse for the rest of the century,” Sterman says.

Sterman’s research shows that, in the short term at least, burning wood pellets adds more carbon to the atmosphere than coal. That carbon can eventually be sucked back up by new trees, but he says that can take more than 100 years. So for decades, all that additional carbon dioxide is contributing to climate change, ocean acidification and sea level rise.

“And even if you were to later get the benefits of that carbon being pulled out of the air by forests regrowing, you’ve made the climate worse,” Sterman says. “And those impacts persist for hundreds of years.”

Many other researchers largely agree with Sterman’s findings. But other studies support the industry view. Ultimately, the difference largely comes down to what factors you look at, and over what length of time. Assumptions about what would have happened to the wood if it hadn’t been burned for energy — if it would have been left to grow, for example, harvested for other uses, or left to decompose — affect assessments of its carbon neutrality. So do variables like the type of tree the wood came from and how fast it grows.

Some studies also consider the possibility that a thriving timber and wood pellet industry creates an incentive to plant more trees and protect forests from commercial development.

For now at least, many governments seem enthusiastic about using wood to generate electricity. US Environmental Protection Agency administrator Scott Pruitt has declared biomass to be carbon neutral, and a bill in Congress would do the same.

Back across the Atlantic, the EU recently re-affirmed its position that substituting trees for fossil fuels is good for the climate. And government subsidies across Europe, including roughly a billion dollars a year in the UK alone, are fueling growth in the industry.

“The fact that the industry exists at all at the scale that it does is purely because of the subsidies that the UK and other EU governments are putting into biomass,” says Duncan Brack, a researcher with the Chatham House think tank in London. 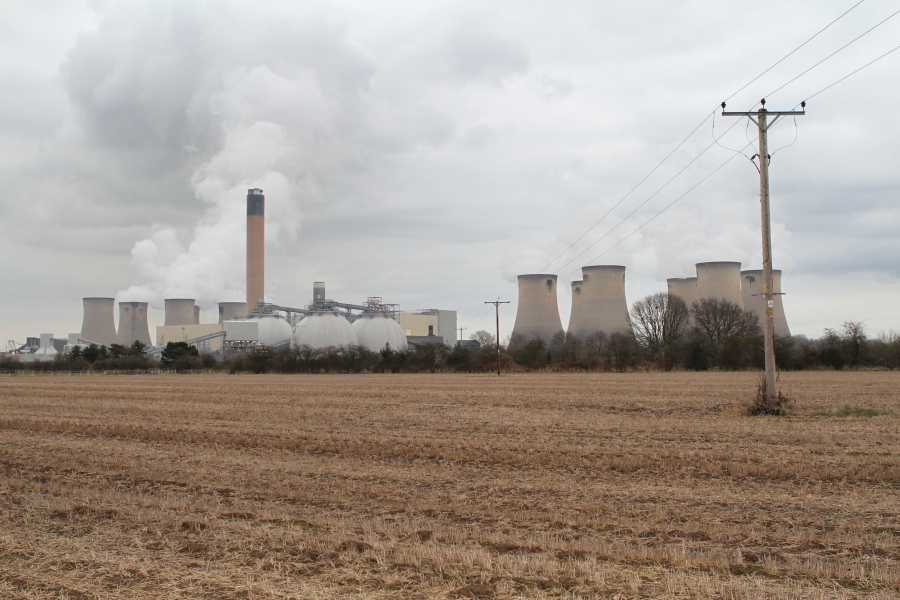 Drax is the largest power plant in the UK and has converted three of its coal-fired units over to wood. Large wood pellet storage domes, center left, keep the pellets at their Yorkshire plant dry.

“I think what the government should do is recognize the impact that biomass use is having on the climate and on forests, and restrict the use of feedstock to that material which has the lowest impact on climate,” Brack says, meaningsources like sawdust and waste wood that have few other uses, and otherwise would decompose quickly and release carbon even if they weren’t burned for energy.

Industry charging ahead in the UK

The scientific jury is out on that, but Drax is charging ahead. It’s planning to switch a fourth unit over from coal to biomass this year.

Meanwhile, two more big biomass plants are in the works in the UK, and the industry continues to expand in Europe, the US and elsewhere around the world.