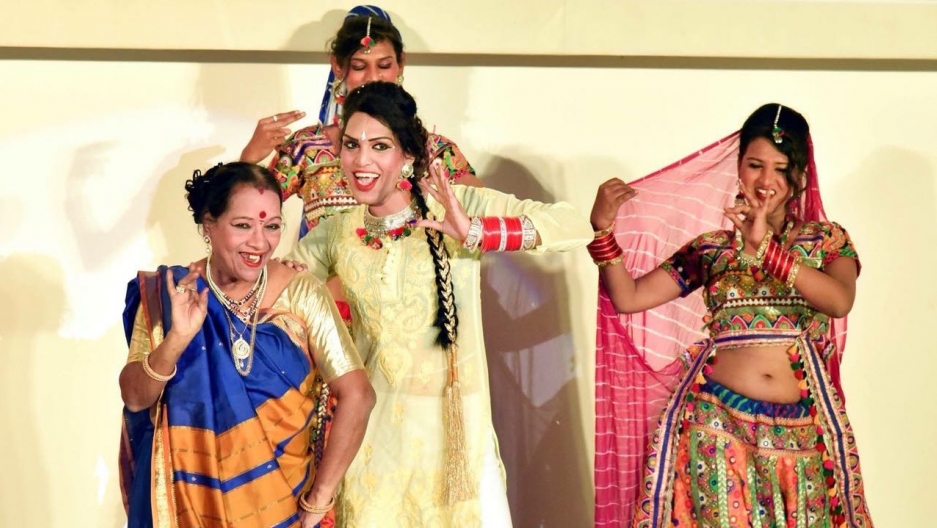 Dancing Queens, a trans women-led dance collective in India, showcases expressions of transgender life through the medium of dance.

On a quiet, spring evening, when many people in Mumbai are rushing to catch the first bus or train home after work, Paras Thakur tears her way through the crowds. She makes a two-hour journey during peak traffic hours to get to dance rehearsal. But that doesn’t dampen her enthusiasm to meet with others with whom she can be herself.

All of 22 years, and transgender, Thakur is preparing for an upcoming show in the city. The troupe she belongs to, Dancing Queens, India’s first trans women-led dance collective, will perform a medley of freestyle, contemporary and folk dances set to Bollywood tracks. That may sound fairly typical for an Indian dance ensemble — but with a mix of trans women performers and stories of their lives thrown in, the show is unique and pathbreaking.

Jadhav, who works as a research assistant at Humsafar Trust, India’s oldest registered organization working for LGBT rights, says that a lot of trans women have dancing talent that often goes unrecognized. “Trans women are seen dancing only during badhais, for which they get no respect,” she said. Badhai, which is Hindi for "congratulations," is a musical blessing given to newborns and newlyweds and at store openings by trans women who belong to the ancient third gender hijra community. Many consider this blessing auspicious. For a lot of hijra women, performing this ritual is their only means of livelihood — apart from begging and sex work.

Abhina Aher, another founding member of Dancing Queens, is a trans activist who works for India HIV/AIDS Alliance as the associate director of sexuality and gender rights. Abhina Aher recently surveyed the socio-economic culture of 50,000 transgender people in India through her program, Pehchan. “We found that 85 percent transgender people beg and do sex work even though 37 percent have passed at least 12th grade,” she said.

Thakur, who does badhai to support herself, says that it is not easy to earn money through this ritual since transgender people aren't always well-received. “Sometimes, we return empty-handed even after dancing because people don’t believe in us,” she said.

Transgender dance is seen as vulgar, and the dancers are often looked down upon as heavily made up, brightly clad, people with a suspicious gender identity. “We started Dancing Queens to change this perception,” Jadhav said.

Related: What it’s like to be trans when both language and laws refuse to recognize your identity

The troupe now has 18 trans women, three heterosexual members and nine others from the LGBT community. Many transgender members still beg or do sex work to support themselves. But what binds them together is their love for dance.

Thakur's favorite role is that of a social worker in one of Dancing Queens’ signature dance dramas — a glimpse into the life of a typical trans woman in India. It touches on themes like growing up different, discovering one's sexuality, begging, prostitution and finding community. A real-life scenario plays out between Abhina Aher and her 70-year-old mother, Managala Aher, who is also a part of the ensemble. As the protagonist’s mother in the show, Managala Aher refuses to accept her son’s gender identity as a trans woman.

Early on, Managala Aher says, she used to tear up every time she portrayed the role because it reminded her of the brief period when bitterness had seeped into her relationship with Abhina Aher. Now, she is a strong supporter of the LGBTQ community, “mummy” to all troupe members and informal counselor to parents about acceptance of their queer kids. “It is very difficult for a transgender person to survive if parental support is missing,” Managala Aher said. Transgender people face a lot of obstacles in India: There's often poor support of the transgender community by families and pervasive discrimination and harassment by society, especially in the workplace.

The Dancing Queens have been at the receiving end of plenty of discrimination, as well. During some of their earlier performances, viewers threw pebbles at them and called them derogatory names. “Some of our audiences also thought that touching us anywhere is fair game,” said Jadhav. “So, for our safety, we used to wait in the greenroom after the show and make an exit only after everybody had left.”

India’s famous Supreme Court judgment on transgender rights granted “third gender” status to its 490,000 transgender persons four years ago. But the transgender community has been at odds with the government regarding a bill to formalize the judgment. Among other things, “the bill unfairly violates their right to self-identification and doesn’t fulfill the promise of reservation,” said Karthik Bittu Kondaiah, a transgender rights activist and associate professor at Ashoka University near Delhi. “The bill provides no legal recourse for discrimination against transgender people.”

Instead, it has introduced further discrimination by imposing less harsh sentencing for sexual abusers of trans women as opposed to cisgender women (their gender identity corresponds with the sex they were identified with at birth). The bill, which is likely to be considered in the parliament later this year, also fails to address rights to marriage and adoption.

The troupe members believe that it is a combination of laws and social attitudes that can give transgender people a dignified life. During their postshow, question-and-answer rounds, Dancing Queens have been able to initiate conversations with their audiences. “Some people shared their surprise on seeing us as professional artists; they had only seen transgender people begging on the road,” said Abhina Aher. “Many have opened up to us about their relatives’ queer orientation and discussed acceptance.”

“Busting misconceptions is a two-way effort,” said Maya Urmi Aher, the transgender manager of Dancing Queens, who works at a community-based organization in Mumbai where she is the only representative of her community. She has spoken extensively about herself to her colleagues and introduces her gender identity to every new person she meets to mitigate misconceptions about transgender people. “For nurturing a healthy relationship, it is equally important for the transgender community to make others comfortable around them,” said Maya Urmi Aher.

Today, after almost 90 shows, Dancing Queens has performed across the country for mainstream organizations such as the National Human Rights Commission and National AIDS Control Organization, nongovernmental organizations and even some colleges. Godrej Group, an Indian company, employed their first trans woman after Dancing Queens’s first performance on their premises. “It has taken us some time to reach here, but now people look at us as professional dancers,” Aher said. “They even like to take pictures with us.”

As we prepare to create magic on stage #backstage #dancingqueens

For its members, Dancing Queens is a much-needed safe space for expression. Maya Urmi Aher received the support and guidance for her transition into a trans woman. And as for Thakur, she got a respectable platform to showcase her talent. “People know me because I’m a Dancing Queen. They shout my name when I perform; I have a fan following!” Thakur said.