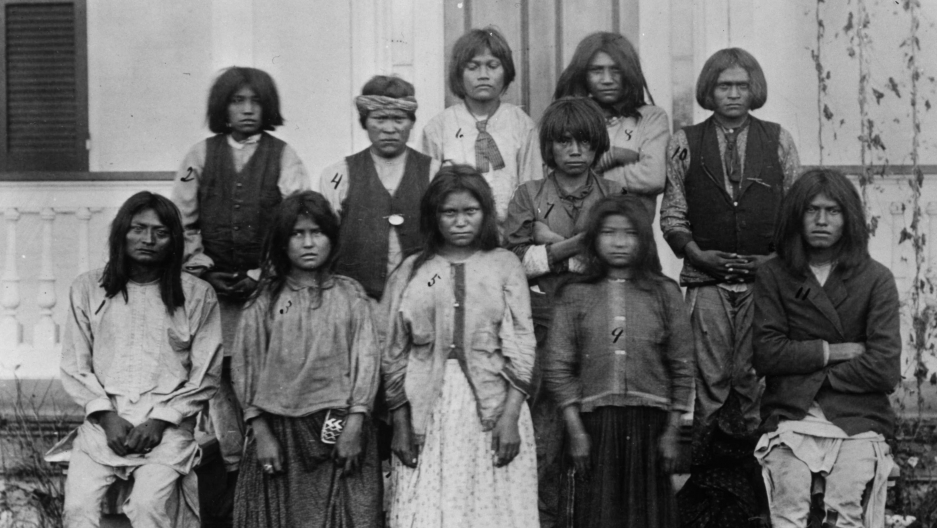 A group of Chiracahua Apaches on their first day at Carlisle Indian school, 1886. "Separating children and their families to ‘kill the Indian to save the man’ by sending Native children to boarding schools, and doing it in the name of religion, is one generation removed from my family,” wrote Peggy Flanagan on Twitter. Flanagan, White Earth, is a candidate for lieutenant governor in Minnesota. “Trump’s ‘zero tolerance policy’ is nothing more than a clear violation of human rights. We must learn from history. We must stand with immigrants and refugees.”

Indian Country remembers. This is not the first administration to order the forced separation of families.

The Trump administration has initiated a zero-tolerance policy on the border. Zero tolerance means that people caught crossing the border are treated as criminals.

On Friday, the Department of Homeland Security said the Trump administration separated 1,995 children from the adults they were traveling with at the US border between April 19 and May 31.

“The act of ripping children away from their parents is nothing new for the United States. Separating children and their families to ‘kill the Indian to save the man’ by sending Native children to boarding schools, and doing it in the name of religion, is one generation removed from my family,” wrote Peggy Flanagan on Twitter. Flanagan, an Indigenous member of the White Earth Nation of Ojibwe, is a candidate for lieutenant governor in Minnesota. “Trump’s ‘zero tolerance policy’ is nothing more than a clear violation of human rights. We must learn from history. We must stand with immigrants and refugees.”

Many on social media referred to a piece in Indian Country Today by Mary Annette Pember in 2013, illustrated by a picture of tiny handcuffs.

From the piece: “For such small objects, the child’s handcuffs are surprisingly heavy when cradled in the palms of one’s hand. Although now rusted from years of disuse, they still convey the horror of their brutal purpose, which was to restrain Native children who were being brought to boarding schools. 'I felt the weight of their metal on my heart,' said Jessica Lackey of the Cherokee tribe as she described holding the handcuffs for the first time."

Pember wrote that she had heard rumors about the existence of the handcuffs during visits to Haskell. Then Haskell agreed to allow a public viewing of the handcuffs. She wrote: “Andy Girty, one of the elders who first blessed the handcuffs when they were given to Haskell in 1989, helped unwrap them for me. Known as the Haskell Institute in its early years, the school opened its doors in 1884. It was originally founded as an instrument of the final solution to this country’s 'Indian problem'; Haskell Institute’s mission then was embodied in the now infamous motto of Captain Richard H. Pratt, founder of the Carlisle Indian Industrial School: 'Kill the Indian, Save the Man.' This mindset led to decades of forced acculturation through brutal military-style incarceration cloaked as education in US Indian boarding schools.”

This tragic history is again public policy. And, as in previous public policy debates, the authorities rely on Christian scripture for their inhumane acts.

“The American people have been begging and pleading with our elected officials for an immigration system that is lawful and that serves our national interest — one that we can be proud of. There is nothing mean-spirited about that. They are right, decent and just to ask for this,” Attorney General Jeff Sessions said last week. “We’ve got a choice here. We either have open borders or we have laws. It’s one or the other.”

Sessions, a Sunday School teacher, proclaimed: “I would cite you to the Apostle Paul and his clear and wise command in Romans 13, to obey the laws of the government because God has ordained them for the purpose of order.”

Immigration is an issue that will surface again in Congress as soon as this week.

Republicans debate their own competing plans for immigration reform. The House will consider two bills: a conservative, hardline approach and a more moderate version. (Moderate among Republicans. The bill is unlikely to win votes from many Democrats.) A third bill, an actual moderate proposal, could only be brought to the floor with a discharge petition, the signatures of a majority of members. The House leadership’s immigration bill is designed to make sure that never happens.

But the division between Republicans (harsh across the board on immigration or mostly harsh on immigration) leaves Democrats out of the discourse, and therefore any bill is unlikely to become law.

The conservative bill is authored by House Judiciary chair Bob Goodlatte of Virginia. That bill includes funding a wall, further slowing legal immigration, and ending family reunification as a policy. The conservative approach does not address the family separation issue or any legal citizenship route for the dreamers, immigrants who came to this country as children.

The House leadership bill, according to a draft posted by Politico, calls for more border security, and a solution for DACA-eligible immigrants via a special visa. It also says it ends separation of families at the border.

Rep. Tom Cole, R-Oklahoma, a member of House leadership, told Axios that the only way this bill can happen is if Trump “leans in on it hard, he can make a huge difference.” The president is expected to meet with House Republicans this week.

Perhaps an immigration bill could pass in the House. But Senate Republicans would need votes from Democrats in order to prevent a filibuster — and that’s unlikely.

Meanwhile, over the weekend, Speaker Paul Ryan picked up more flack for the Trump policy of separation of children from their parents.

Singer John Legend attacked Ryan’s Father’s Day tweet. “Seriously, f--k you,” he tweeted. “Reunite the families at the border and we can talk about father's day.”

Legend is not alone in his condemnation of the policy. Former First Lady Laura Bush wrote an op-ed against the policy in The Washington Post. “On Sunday, a day we as a nation set aside to honor fathers and the bonds of family, I was among the millions of Americans who watched images of children who have been torn from their parents,” she wrote. “People on all sides agree that our immigration system isn’t working, but the injustice of zero tolerance is not the answer. I moved away from Washington almost a decade ago, but I know there are good people at all levels of government who can do better to fix this.”

And there is one more parallel with Indian Country and the border policy of family separation. The president of the American Academy of Pediatrics, Colleen Kraft, told Buzzfeed News that the separations will cause “irreparable harm to lifelong development by disrupting a child’s architecture. Immigration has become so politicized. We would really like people to sit back instead and think of the health of these children.”

One such study is a 2013 report in the Journal of Family Issues. Researchers looked at historical trauma “incurred by genocide (see United Nations definition, 1948) and the subsequent forced acculturation policies has been accumulating over the past decade to include affective states like anger, depression, guilt, and anxiety, internalized oppression, and feelings of inadequacy in parenting roles.”

The Intergenerational Effects of Relocation Policies on Indigenous Families by Melissa L. Walls, PhD, and Les B. Whitbeck, PhD, said that “government relocation policy of the 1950s provides a somewhat recent example of an acculturation policy. It affected a cohort of whom many still survive and affords the opportunity to measure the psychosocial impact of moving individuals from reservations to urban employment settings.”

The study found “a critical and widely documented aspect of intergenerational continuity concerns the mediating effects of parenting processes on parent-to-child transmissions of behavior and emotional well-being.”

A key point: “Generational ties are particularly valued because elders are viewed as repositories of cultural knowledge, spirituality, and traditional language. Their life experience is enormously respected, and they are turned to for direction and advice. When these linkages are disturbed the consequences ripple through subsequent generations.”

This story was published by Indian Country Today.