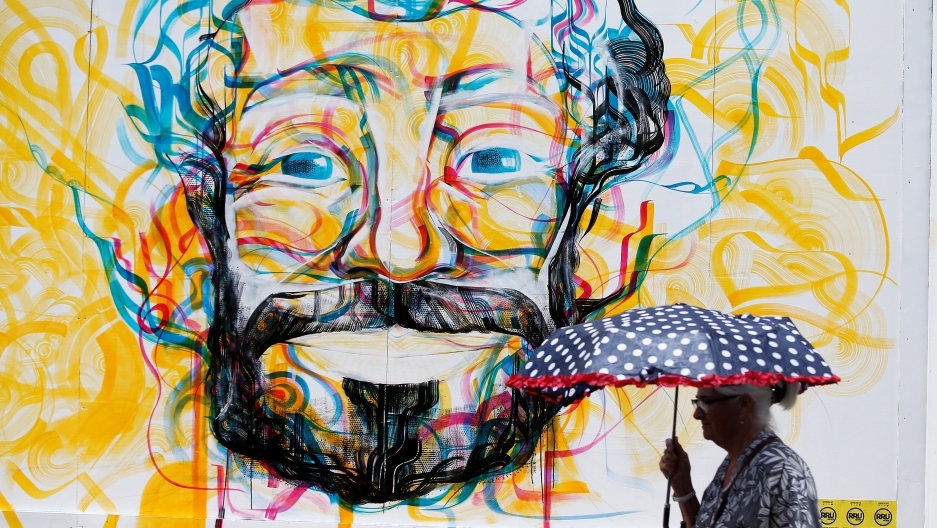 After a 28-year absence from the World Cup, Egypt will once again take the field in this year's games in Russia. Though merely qualifying for the World Cup brought euphoria to Egyptians only months ago, they're now faced with playing Goliaths like Brazil, Germany, France and Spain. Their reason for collective national hope is Mohamed Salah.

It took just one season of mesmerizing goals for Salah, 25, to be coronated the English Premier League’s “Egyptian King” while playing for Liverpool. The footballer’s name is uttered regularly in the same sentence as Lionel Messi and Cristiano Ronaldo, and his teal soccer shoes are displayed alongside the statues of Egyptian pharaohs in the British Museum in London.

But the improbable story of Mohamed Salah matters for reasons far greater than his many goals. At a moment when Islamophobia and malice for refugees are ascendant throughout Britain and the Western world, Salah is a Muslim, Arab and North African who openly and unapologetically professes his faith on Europe’s soccer fields. Given the prevailing virulence of our time, the audacity and implications of this simple act are incredible.

Even outside the borders of his homeland, Salah’s explicit displays of his identity are not only accepted but willingly celebrated by large swaths of fans in Europe and throughout the Muslim world. As an individual who straddles two worlds that many often deem irreconcilable, Salah holds great social and cultural influence in an increasingly fragmented society.

On the field, Islam animates Salah. He visibly cups his hands in prayer as he recites sacred verses in Arabic prior to games. After scoring, the Egyptian phenom regularly points to the heavens and bends down to perform sujood, the Islamic act of prostration. Through this humble act of lowering himself before God, Salah communicates his gratitude for the goal he has just scored.

Not only have the Liverpool faithful taken note of Salah’s religious expression, but it has become the focal point of their rallying cry for him. Most notably, they borrowed the tune of a '90s English song called “Good Enough” to craft their own Salah chant: “Mo Sa-la-la-la-lah, Mo Sa-la-la-la-lah/If he’s good enough for you, he’s good enough for me/If he scores another few, then I’ll be Muslim too.” It continues: “Sitting in the mosque, that’s where I wanna be!”

The song has gone viral despite the varied backgrounds and political leanings of those singing and listening. As Piara Powar, executive director of London-based nonprofit FARE Network that studies discrimination in soccer, noted, “This is the first time I’ve seen such an exuberant, overt, positive appreciation that includes [a player’s] religion.”

It's important to note that Salah’s ascendance has happened at a fascinating time. Far-right populists in Europe and the United States have used Islamist terrorism and a ballooning refugee crisis —from predominantly war-stricken Muslim countries like Syria, Afghanistan and Iraq — to incite Islamophobia.

While Mohamed Salah has remained largely apolitical in his tenure at Liverpool, his visible displays of faith compel fans to reconsider their malevolence for Islam. He represents in flesh the complex, multilayered identity possessed by Muslims in Britain and indeed all over. On the prominent stage of European soccer, Salah has unflinchingly forced fans to reckon with this truth.

Just as important is what Salah undeniably represents for Muslim youth and forlorn young men. Despite the conflagrations that surround him, he has remained himself on the field. For many who are tempted to suppress or shed parts of their Muslim identities out of fear or shame, Salah is someone they can relate to and find hope in.

None of this significance is lost on Mohamed Salah. “It's something I think about a lot,” he said in a recent interview.

And as Salah takes the field for Egypt in the coming days, it is incredible to think that so many in the world see a small part of themselves in a bearded man named Mohamed. In this particular moment of global rancor, there is perhaps no more encouraging thought than this for the World Cup.

Jalal Baig is a physician and writer based in Chicago. His work has appeared in The Washington Post, The Guardian, The Atlantic, NBC News, Slate, Vice and elsewhere.