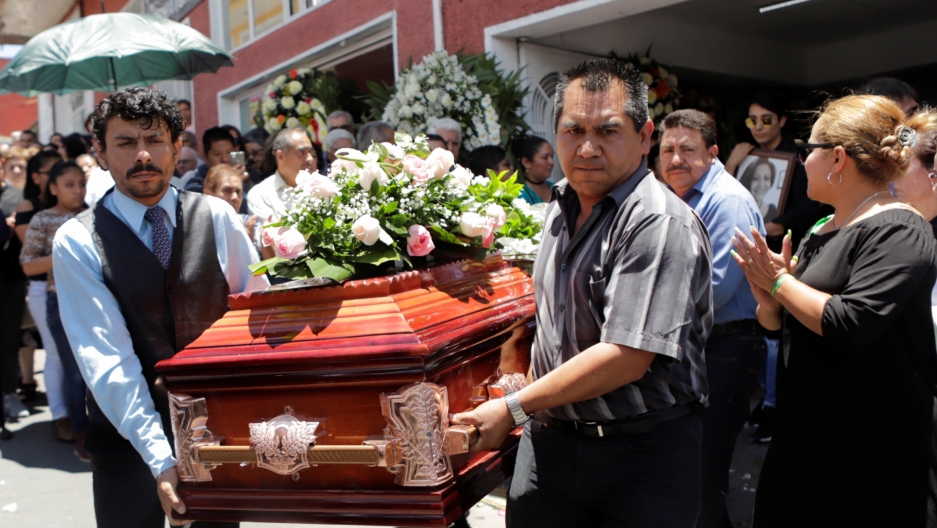 Relatives carry the coffin of Juana Iraís Maldonado after gunmen shot and killed Maldonado, a Green Party candidate for the district of Huauchinango, and Erika Cazares, a municipal councilor from Juan Galindo, during their funeral in Huauchinango, Puebla, Mexico, June 3, 2018.

Last week, Mexican congressional candidate Fernando Purón was shot while posing for a selfie with his supporters, and his murder was captured on video.

As Mexico prepares for elections on July 1, the country is facing an unprecedented wave of political violence — 113 political candidates and eight journalists have been murdered since the election process began last September. With more than 3,400 political seats up for grabs in this election, Mexico has faced serious challenges in providing adequate security to those running for office, especially those in small towns and rural areas.

According to a recent report on political violence, 72 percent of the violence targeted opposition candidates. Although mainstream media outlets in Mexico and the US tend to blame political violence on drug cartels, the reality is more complex given that cartels are often made up of former or present members of both the army and the police, and that their presence often represents the will of state and political officials.

Related: The Mexican government says it will help people who are deported, but they often are left to make it on their own

The violence is truly shocking.

In less than 24 hours this month, three women running for office in Mexico were murdered, bringing the total number of female candidates assassinated to 17.

“These facts reveal a serious situation that women in politics are experiencing, and that it is political violence based on gender,” said Senator Martha Tagle.

In April, Maribel Barajas, an Ecologist Green Party candidate in Michoacán, was stabbed to death. As more women enter the political arena, they are experiencing threats and violence that often target their gender, including threats of rape. In May, Claudia Olivas, who was running for mayor of Chalchihuites in Zacatecas, dropped out of the race after her neice was raped and beaten and after Olivas received threats against both herself and her niece.

To understand and prevent political violence in Mexico, including violence against women journalists, there needs to be a greater discussion about the role that gender violence plays in elections and the specific ways in which women are silenced.

Freedom of the press and fair and free elections go hand in hand, which is why the levels of violence against journalist are so alarming. Mexico was ranked the deadliest country for journalists in 2017 — deadlier than even Iraq and Syria. Until 2016, most newspapers in Mexico, including El Universal, El Noreste and Vanguardia de Saltillo, didn’t have security policies in place for journalists.

But in 2016, Esteban Roman, editorial deputy at the paper, said he realized, “We also had to make a commitment to provide security at work, including fair pay for journalists and to demand justice in cases of threats and violence.” El Universal set up meetings with the United Nations and the Inter-American Human Rights Commission.

As a result, El Universal made an agreement with 35 media entities in Mexico about how they would respond collectively to condemn the assassination of journalists.

Adrián López, editorial director of El Noreste in Culiacán, said having preventative security in place at newspapers was important, especially in the state of Sinaloa, which has seen a spike in violence since Joaquín “El Chapo” Guzmán Loera, the former leader of the Sinaloa Cartel, was extradited to the US.

In 2017, award-winning journalist Javier Valdez, a friend of López's, was murdered. Valdez founded and edited the weekly newspaper Ríodoce.

“What happened to Javier changed everything. He was one of the most experienced journalists in the area. In the process of making decisions about him — very few decisions were made. In the four months in between receiving death threats and his murder, no decisions were made. We prefer to err on the side of caution,” López explained.

Valdez's murder exemplifies something that is true for both journalists and politicians — those who are most at risk for violence are the ones who are writing about or speaking out against local corruption.

To put this in context, Javier Duarte Ochoa, the ex-governor of Veracruz, who has been implicated in violence against both local politicians and journalists, stole more than 1.5 billion pesos (about $83 million) during his term as governor. Those who investigated or opposed him were swiftly silenced, including photojournalist Rubén Espinosa. The current president of Mexico, Enrique Peña Nieto, has been involved in scandals ranging from the disappearance of 43 students to a $7 million mansion gifted to his family by a federal government contractor.

Mainstream media outlets in Mexico and the US often frame political violence in Mexico in terms of drug cartels, as if the violence were only related to fighting for drug territory. However, the truth is that drug cartels are often the extrajudicial arm of the political party in power, and they are used to execute both political opponents and journalists who oppose or expose corruption.

The result of this violence is that Mexican citizens will have less information and fewer choices on the ballot when they go to vote on July 1.

Editor's note: This story has been updated to reflect the latest number of political candidates killed and corrects a typo in reference to Valdez's murder.