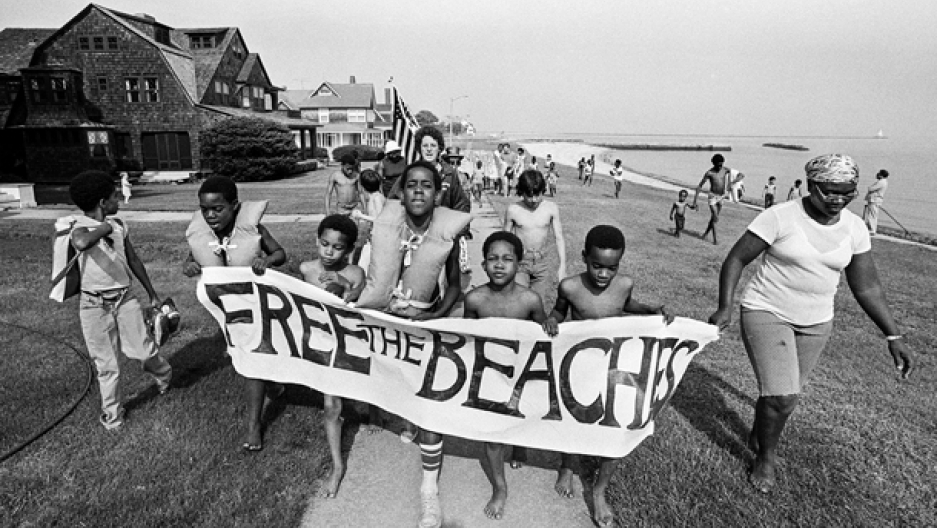 Parents and children from inner-city Hartford lead a protest march in front of seaside mansions in Old Saybrook, Connecticut, in the 1970s.

In the 1960s, just about all of the beaches on Long Island Sound in Connecticut were off-limits to people of color. Then Ned Coll came along.

In his book, "Free the Beaches: The Story of Ned Coll and the Battle for America’s Most Exclusive Shoreline," historian Andrew Kahrl describes Coll’s creative protests to smash the color bar and open the beaches to all children wanting to cool off on hot days.

Connecticut and other Northern states had a long history of wealthy, white folks barring people of color and the less affluent from their sandy shorelines. So, in the 1960s, the Connecticut beaches on Long Island Sound became the target of “wade-ins.”

When Coll began his protests, public access to Connecticut’s beaches was limited. On the 253-mile shoreline, there were 72 miles of sandy, white beaches but only seven miles of that was open to the public. The rest was in the hands of private homeowners, clubs and private beach associations, which were like gated communities.

“It was something that really was exclusive to upper middle class and wealthy communities that were fortunate enough to live or own summer cottages along the shore,” Kahrl says.

Coll was a young, white, Irish Catholic who had recently graduated from college. In 1964, he had a comfortable job in the insurance industry in Hartford, Connecticut. He felt distraught after the assassination of President John F. Kennedy and feared that, following his death, the administration’s new spirit of civic engagement was in danger.

So, Coll quit his job and founded an anti-poverty organization called Revitalization Corps. He imagined it as a domestic Peace Corps that aimed to get middle class, white Americans, primarily those living in relative privilege and comfort, to become more involved in solving the problems of poverty, segregation and racism in America.

Coll came to the issue of beach access almost by accident, Kahrl says. “He and the volunteers, many of whom were African American mothers who lived in the communities where he was serving, wanted to find ways to get children out of the city during the summer and give them more cultural enrichment activities, whether it be trips to the countryside or other excursions. They just decided during the summer of 1971 that they would start leading trips down to the shore.”

At first, they didn't think of it as a protest at all. They thought of it as just another activity they could do during the summer when kids are out of school. "They loaded up a bus of children and mothers and headed down to the state shoreline and discovered that there was very little access available to them. There were few places they could actually go, and they were not welcomed at the beaches they did try to access.”

Kahrl says the anger and hostility that greeted Coll and his group “really unnerved him and woke him up to some of the realities of racism in these places.” Coll first sought to engage these small beach communities but as they became increasingly resistant and hostile to his very presence, he looked for ways to protest and draw attention to the issue.

Kahrl points out that the idea of shoreline belonging to the public originated as early as the Roman Empire. In the year 530 A.D., the Roman emperor Justinian proclaimed that shorelines were common to everyone, subject to the same law as the seas and that no one could be forbidden from approaching them. This idea later became known as the "public trust doctrine." It formed the basis of the English common law and became part of American common law when the United States was created.

On July 4, 1974, Coll staged an “amphibious invasion” from the sea on one of the segregated beaches. “Just before noon, three boats appeared, all headed toward the club shore,” Kahrl writes in his book. “Ned, with an American flag attached to a pole, leaped off the bow and began marching, MacArthuresque, toward the beach. Stopping just before he reached the dry sand, he shouted, ‘Happy Fourth of July, everyone,’ and defiantly planted the flag in the sand. Moments later a plane began circling overhead carrying a banner that read, "Free America's beaches." Club members stared in disbelief. This was an ambush. Parents scooped their children off the beach and made a hasty retreat to the clubhouse.”

Kahrl says this reaction by the locals really stands out to him. Unlike in the South, where wade-ins had been greeted by extreme violence, “in these very well-to-do communities, oftentimes, the response was to simply retreat to the clubhouse, to remove their children.”

“That was really one of the saddest things,” he says. “White and black children would be playing together here on the shore and parents would grab their children and take them away, as if it was some sort of threat to them. At first, they reacted with a degree of shock, and then anger and hostility as they realized that Ned wasn't coming there seeking permission. They were coming there asserting their right to access this beach whenever they pleased.”

The protests that Coll and others waged in Connecticut dovetailed with a national open beaches movement, Kahrl notes. From 1970 to 1980, state and local courts heard over 150 beach access cases, up from 10 the previous decade. Finally, in 2001, the state Supreme Court of Connecticut declared unconstitutional the restrictions communities put in place to explicitly bar nonresidents from accessing their shorelines.

At that point, legally, the beaches became open to everyone, but towns found ways to get around this by limiting the number of parking spots, having parking open only to residents or selling beach passes in a way that made it difficult for nonresidents to purchase them. Some communities even resorted to “cynical” claims that they were restricting access out of environmental concerns, Kahrl says.

Coll’s activism raised awareness of not just the issue of beach access but of a larger set of inequalities that were shaping life in the Northeast and across the country, according to Kahrl.

But, ultimately, Revitalization Corps “struggled to make long-term gains because of Ned's reluctance to work with others, to partner with other organizations and to put in place an infrastructure that would allow communities to organize themselves. And, because he was so single-minded in his focus and so adamant in his beliefs and the issues he cared deeply about, it was oftentimes, his way or the highway.

“Now, that said, the gains that have been made with regard to public beach access are significant,” Kahrl adds. “I think the 2001 Connecticut Supreme Court decision that opened up the state's shoreline to the public could not have been possible were it not for the activism of Ned Coll in the 1970s. But we still see across America this steady trend toward closing off public access and of increased retreat amongst many Americans into private spaces, and that really poses a threat to our democracy as a whole.”