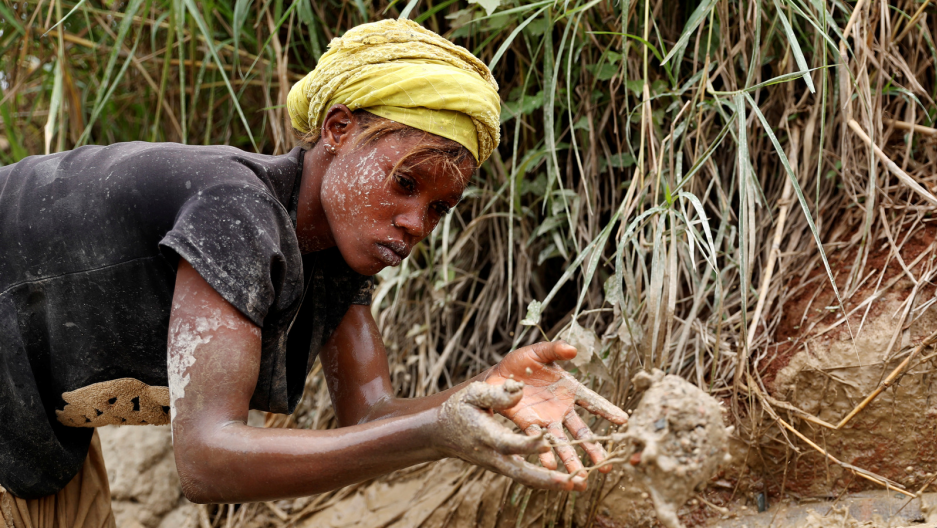 A woman works at Makala gold mine camp near the town of Mongbwalu in Ituri province, eastern Democratic Republic of Congo, April 7, 2018. A new study found that in nearly every country, women face barriers to full economic participation.

As world leaders gather for the G7 in Canada next week, they will face a conundrum: While economic growth remains steady in the developed world, inequality is rising. A new report from the World Bank Group shows that inequality is gendered — and the global economy is losing out on $160 trillion by allowing the gender wealth gap to persist. This amounts to an average of $23,620 lost for each person in the 141 countries included in the study.

The study, written by Quentin Wodon and Benedicte de la Briere, found that in nearly every country, women face barriers to full economic participation. As a result, even though women represent 51 percent of the population, they account for only 38 percent of human capital wealth — a measure of the future earnings of adults in a given economy. The number for women falls even lower in low-income, high-poverty countries.

“By focusing on human capital wealth, we wanted to show that there is a real dollar cost to this issue. The $23,620 figure represents every person in the world, man and woman,” de la Briere tells NewsDeeply. “Governments can take direct action to correct this gap at the economic level, at the policy level, at the education level, but they have to be willing to act.”

The biggest disparities are in East Asia and the Pacific, North America, and Europe and Central Asia, in each case at between $40 trillion and $50 trillion. In South Asia, losses from gender inequality are estimated at $9.1 trillion. But they aren’t much better elsewhere: The report data shows a gap of approximately $6.7 trillion in Latin America and the Caribbean. In sub-Saharan Africa, the losses are estimated at $2.5 trillion.

Because of this disparity, global human capital wealth worldwide is 20 percent lower than it should be — a statistic that has massive implications for global economic policy, education, infrastructure and local policy.

Canada, which backed the study, will lead the G7 summit and has committed to making global gender equality a key focal point of its G7 presidency. Wodon and de la Briere suggest that governments need to focus on policies that make economic inclusion easier, making it more affordable for families to bring in outside childcare or making it easier to access water and electricity through infrastructure so that women aren’t expected to travel for resources or be available for cooking at specific times. Canada has indicated that it plans to underline these and other issues during next week’s summit in an effort to bring global policy leaders onboard.

A policy framework already exists thanks to a report released by the Organisation for Economic Co-operation and Development (OECD) yesterday during its forum, currently underway in Paris. The OECD’s Inclusive Growth Initiative has put 24 policy indicators in front of world leaders that are designed to tackle the global wealth disparity head-on. The framework is designed to provide government leaders with concrete steps they can take to bring women more fully into the global economy right now. Romina Boarini, coordinator of the Inclusive Growth Initiative at OECD, says her group put out the framework in part because of a lack of action.

“We have seen over the past five to six years and even this week with new data, that the global wealth gap is persistent and creates real structural problems for world economies. But the data wasn’t getting traction with political leaders. So we wanted to put a guidebook out there to push the discussion forward,” she says.

The framework is the first step in a broader action plan within the OECD to further inclusivity. The indicators highlight the issues that make the wealth gap more than just a money problem — rather, it is a structural problem that impacts every area of life. Boarini and her team are pushing policy leaders to look at inclusivity in education, infrastructure, financial access and, importantly, how we distribute tasks related to care.

“The costs of this gap are clear. What we wanted to show with our report is that leaders have to be willing to have a conversation about how we live. If there is no infrastructure for taking care of people, then those duties fall to women.

“If we want women to be more involved economically, we have to be willing to have a conversation about how to distribute care more fairly and allow women to be involved in wealth creation.”

Boarini says that global leaders are more focused on these issues than they have been in the past, but the key will be translating this into policy action. The World Bank’s de la Briere agrees.