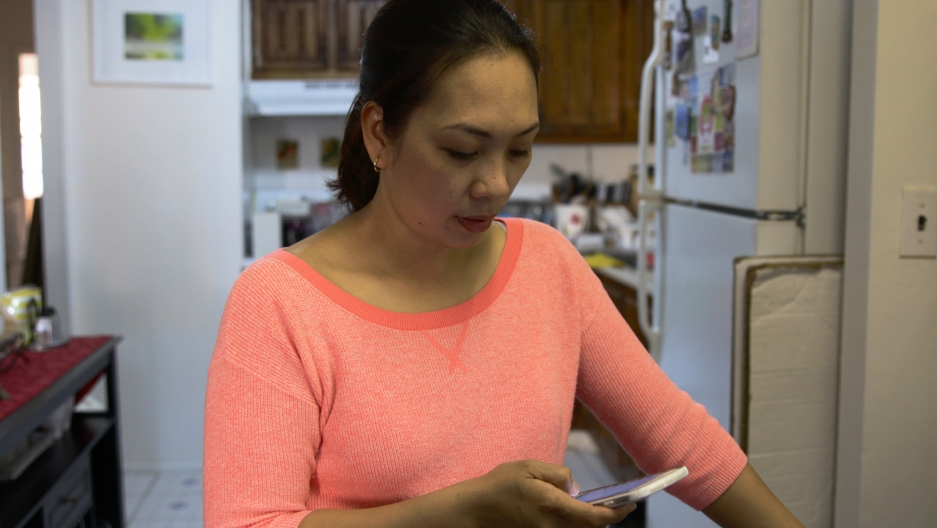 Daisy Santos sends text messages to her children in the Philippines from her home in Queens, New York on May 21, 2018. She wants to bring them to the US but her estranged husband won’t allow it.

When Neriza Caspe said goodbye to her four children in the Philippines 18 years ago, she didn't know how long she'd be gone — just that she wanted to work abroad to better provide for them, and escape her abusive husband.

Caspe lives in New York City now and hasn’t spoken to him in 10 years. She considers herself separated. But she can’t cut ties with him completely because the Philippines is one of two places in the world that doesn't allow divorce. (The other is Vatican City, home of the pope.) The only option to end a marriage in the predominantly Catholic nation is annulment, a costly process that requires proof that the marriage was a fraud, a spouse suffers from psychological incapacity or other, specific, rare circumstances.

If Caspe returns to the Philippines, her husband will be entitled to any property she buys and she’ll have to use her married name.

Now, a bill to legalize divorce is giving her hope. The Philippines’ House of Representatives passed it in a historic vote in March, though the Senate and President Rodrigo Duterte must still give it the green light before it can become law. Caspe says its passage would finally allow her to move on.

She’s not alone. More than two million Filipinos work abroad and more than half of them are women. Their remittances drive the Philippines’ economy, but being overseas has also left many estranged from their spouses back home with no way to end their marriages. Those workers struggle without legal rights to formally divide properties and obtain custody of their children.

The divorce bill would widen the grounds for ending a marriage to include infidelity, abuse and irreconcilable differences. Couples who have lived apart for at least five years or have been legally separated for at least two years would also be able to get divorced.

That so many people like Caspe work abroad is one reason politicians are considering legalizing divorce. An average of 6,300 people leave the country every day to work, according to the Philippine Statistics Authority. Filipino workers in the US sent back US $9.5 billion in 2017, about a third of all remittances from overseas workers that year, according to the Philippines’ central bank. Many overseas workers pay hefty placement fees to independently-run recruitment agencies, which deploy them around the world to work as healthcare professionals, domestic workers, caregivers and in other jobs.

Filipino Speaker of the House Pantaleon Alvarez says he authored the divorce bill after meeting overseas workers in unhappy marriages. Members of the House of Representatives met with Filipino workers’ groups in Hong Kong, Japan and the United Arab Emirates to get their feedback.

Sitting in her apartment in Queens, Caspe says she knows many overseas workers in marriages that buckled under the strain of living apart or, like hers, were broken to begin with. She says that in the Philippines, it’s common for husbands to take on mistresses while their wives work abroad.

“Most Filipinas from our country end up like this — separated,” she says.

One of them is her friend and former roommate Daisy Santos, whose marriage soured over money issues. She came to the US 11 years ago to work and send money home to her three children in Manila and her mother. Her estranged husband lives with another woman.

Santos has been preparing for her children to move to New York for months, asking her roommates to move out, buying new furniture and painting her apartment. But several weeks ago, her husband changed his mind about letting them go, and they’re currently struggling to reach an agreement.

“He’s saying that they don’t have to come to the US to have a better life,” she says. “It’s so frustrating.”

The situation is one example of how the lack of divorce deprives women like Santos of rights, says Elizabeth Aguiling-Pangalangan, a professor at the University of the Philippines College of Law. She has hosted legal clinics for migrant workers in Europe.

Aguiling-Pangalangan says she frequently meets female migrants who have to share ownership of their homes in the Philippines with their estranged husbands, even though they paid for the properties themselves.

“They ask me, ‘Can my Philippines husband claim the property?’ and I say, ‘Unfortunately, yes,” she says. “There is no solution.”

Pro-divorce advocates have argued for decades that only the rich can afford to file for annulments, which can cost several times what the average family in the Philippines earns in one year.

Santos heard about the hefty fees before she consulted a lawyer the last time she was in the Philippines two years ago. But she was surprised to discover that an annulment is also virtually impossible for a migrant worker outside of the country.

The process would require her to travel back and forth to the Philippines for a psychological evaluation and multiple court hearings. Each case takes several years as it winds its way through congested family courts. 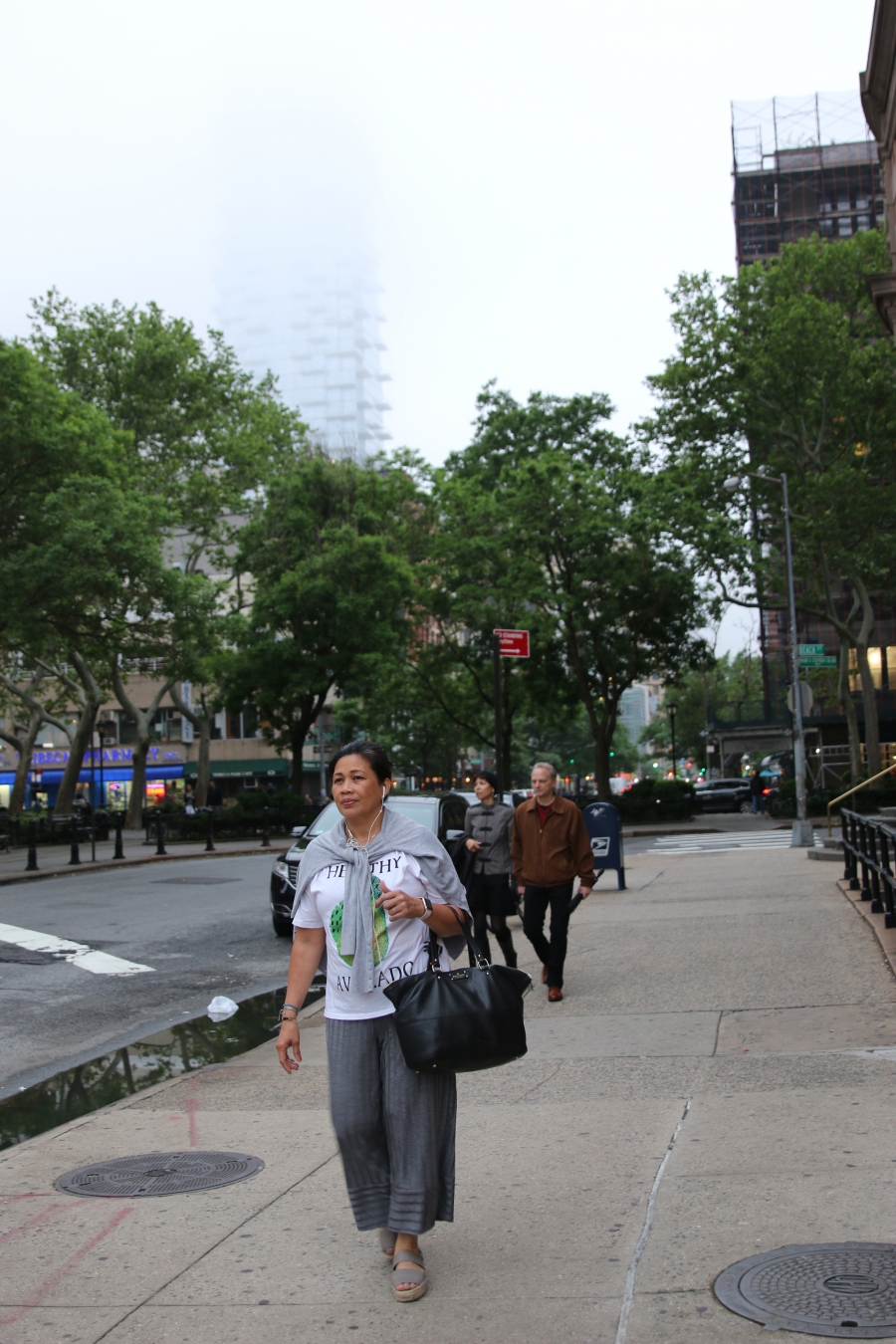 Neriza Caspe, 50, has lived in New York City since 2010. Eight years later, she is estranged from her husband in the Philippines but can’t get a divorce there. “I’m a single woman but I’m not free,” she says.

Caspe says the process was out of reach for her, too. Even if she had been able to come up with the money, her four children would have needed it more.

“For me, it’s just unfair and unjust knowing that all your physical and emotional torment from the relationship are not enough to nullify the marriage,” Caspe says.

Caspe married her husband at 19, a few months after meeting him, and their relationship quickly deteriorated. She says he hit her when they argued, pursued other women and drank excessively.

“I couldn’t find him anymore at dinnertime,” Caspe says. “Sometimes he didn’t go home for two days, for three days.”

The last straw came when he started using drugs. “It was the thing that pushes me out because I was already worried about the future of my children.”

In 2014, Caspe turned to US courts and filed for an uncontested divorce in New York. She asked a friend from her hometown to deliver divorce papers to her husband on an upcoming trip. Her husband refused to sign, so her friend signed an affidavit saying she had served the papers. Caspe’s divorce was finalized a year later. But the Filipino government doesn’t recognize it.

These days, she works as a nanny to twins in Tribeca. Her husband is in prison in the Philippines for dealing drugs. She’s given up on getting sole ownership of her family’s home and wants to cut ties with him once and for all.

The rest of the fight to legalize divorce will not be easy. Several senators have said they oppose the idea. The Senate has yet to file its own version of the bill, and there’s no time frame for a vote. President Rodrigo Duterte doesn’t support the divorce bill, according to his spokesperson. In the last 20 years, there have been about six attempts at legislation to allow for divorce, in varying forms, none successful.

Caspe says she’s worried that the legislation has stalled yet again, but she’s hopeful that the House of Representatives’ vote in March means that the country has turned a corner. The Philippines is now closer to legalizing divorce than it has ever been before.

She can already imagine what passing a divorce bill would mean to women like her.

“It will be a big victory,” Caspe says.