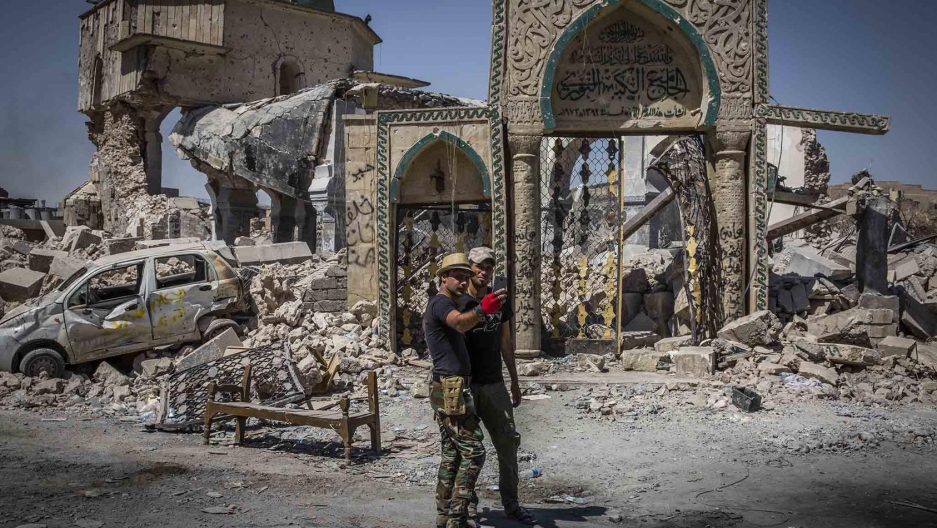 On May 12, Iraqis elected a new national parliament. In a surprise turn, a coalition led by controversial cleric Moqtada al-Sadr — a staunch opponent of both US and Iranian influence in Iraq — won the most seats.

Join us on May 21 ( from 2 p.m. to 3 p.m. ET) for a provocative town hall debate on how Iraq’s leaders can overcome years of sectarian violence and find unity, as well as what a future alliance with the West may look like. You can watch the live video below or attend in person at the United States Institute of Peace in Washington, DC.

What were the main issues heading into Iraq’s May 12 parliamentary elections and what does it mean for the country?

Iraq’s parliamentary elections represent a continuation of Iraq’s rocky, but nonetheless, ongoing path to democracy. Following the military victory over ISIS, it is critical for Iraq that the elections yield a truly inclusive government capable of addressing the difficult legacy of the war with ISIS by providing security, supporting more than 5 million displaced persons and returnees, fighting corruption, rebuilding destroyed cities and towns, and so on.

Many Iraqis and members of the international community viewed the elections as a competition between Iran and the United States. The level of turnout and the integrity of the elections are key issues that will threaten the legitimacy of the vote and new government.

Only 44.5 percent of Iraqi voters cast a ballots in this election. What does the low turnout say about Iraqis’ faith in their government?

The low turnout indicates that many Iraqis lost faith in their political class and that the electoral process could bring new leaders and change to the government and their lives. The previous failure of leaders and the lack of change, combined with security concerns, logistical challenges, campaigns to discourage voters and influential Ayatollah Ali al-Sistani not encouraging people to vote — unlike in past elections — all led to low turnout. Many Iraqis believed the elections would ultimately result in little change, with the same big parties and leaders — who were responsible for exclusionary policies, the rise of ISIS, massive displacement and destruction, corruption, and more — remaining in power in some form. This pessimism is a great risk to Iraq’s peace and stability.

Shiite cleric Moqtada al-Sadr — who is known for being against American and Iranian influence in Iraq — surprised everyone by winning the most parliamentary seats in this election. What does his electoral success mean for the future of the Iraqi parliament?

Al-Sadr’s lead, should he be able to maintain it, will give him a strong position in the Council of Representatives (Iraq’s parliament), which in turn will give him a chance at building the biggest block for choosing the prime minister and forming the new government. In most scenarios, he could play a role as kingmaker. He will continue to push for reforms, as he has increasingly done in recent years.

He's supported by an active constituency that he has shown he can bring to the street for public support. In Iraq, coalitions always change after the elections, so al-Sadr’s coalition could grow stronger or fragment. It is worth noting that al-Sadr’s strong showing is relative to the poor performance of other leading figures, among other factors. For example, incumbent Prime Minister Haidar al-Abadi and his immediate predecessor, Nouri al-Maliki, had their votes split within their al-Dawa party.

What does al-Sadr’s electoral victory say about anti-Iranian sentiment in Iraq? Has Tehran lost influence?

It is true that al-Sadr has grown unpredictable and distanced himself from Iran, but he still maintains a relationship. Although, his pre-election alliance represented a more cross-sectarian Iraqi sentiment. However, Iran-backed parties and coalitions also fared well. For example, the Fatih coalition that represents the interests of the Popular Mobilization Forces (PMF) and supported and favored by Tehran, secured the second-highest number of seats in many provinces according to the preliminary results, a significant increase that will allow them to provide legal, political and economic aid to the PMF. However, it is still too early to determine the net effect of the elections on Iran’s influence.

How will the United States deal with Moqtada al-Sadr, as he will likely play a key role in choosing the next Iraqi prime minister?

Should al-Sadr’s coalition be able to form a government, it will create complex dynamics for him and the US. The joint history of hostility looms large and will make it difficult for both sides to work with each other. Even if they may not state that publicly, there is benefit to both sides in finding a way to work with each other, even if indirectly. If al-Sadr can pull Iraq away from Iran (not necessarily toward the US or Sunni countries) to stand on its own, it is good news for the US and the Gulf countries.

In the same way, security and political support from the US to Iraq and its institutions will increase the chances of the next government of Iraq succeeding and relying less on influential neighbors who seek compensation for their support in the form influence inside the country. The US has indicated that they have a good relationship with the government of Iraq and hope to continue that even if a new prime minister is chosen. Al-Sadr has been increasingly open to international support to Iraq in the past few years. It is possible both sides can have their interests served.

What do these elections say about sectarianism in Iraq?

Unlike previous elections, these elections were the least sectarian in terms of political narratives and the many cross-sectarian coalitions that participated in the elections. Such coalitions will be necessary to form the next government and act on the needs of the people. However, in many ways, Iraq is at a more dangerous place today than when ISIS first emerged, with communities still divided across ethnic and sectarian lines as well as within each community. Prime Minister Haider al-Abadi and his more inclusive and moderate political narrative did appeal to a wider spectrum of Iraqis, but that did not result in higher turnout and votes for his cross-sectarian coalition.

Iraq’s deep ethno-sectarian wounds continue to exist and may worsen if the new government does not work carefully to address them. Iraqis have shown, and they say it privately and some publicly, that they need help to come together and find common ground. The United Sates has an important role to play in helping Iraqis form the new government and consolidate the military gains against ISIS with an inclusive political process, reform program, and stabilization and reconstruction efforts that will help the country move forward and not revert to violence.

What other levers of influence does the US have in the region? How does withdrawing from the Iran nuclear deal affect American influence?

US diplomacy has focused on encouraging the Sunni Arab neighbors of Iraq to engage positively with Iraq by strengthening diplomatic ties, welcoming Iraq back to the region and supporting the country’s reconstruction. These efforts have been successful, for example, in reopening the Saudi embassy in Baghdad and official visits between the two countries. Earlier this year, Kuwait hosted an important reconstruction conference that resulted in $30 billion in pledges in investments, loans and grants to Iraq. An active US role in Iraq will encourage US allies in the region and in the international community to remain engaged in Iraq.

The US withdrawal from the Iran nuclear deal will no doubt complicate things for Iraq and the United States. However, there is a convergence of interests among regional powers (including Iran, Saudi Arabia and Turkey), the United States and the international community. All want to preserve the territorial integrity of Iraq, prevent the rise of ISIS or a similar group again, and see the parliamentary elections lead to a central government that is strong enough to govern Iraq and maintain relative stability.

However, key points of divergence remain: Iran wants an Iraq that is weak and fragile enough for it to influence; the Saudis want Iraq out of Iran’s sphere of influence; and the US wants to see Iraq stronger (e.g. have stronger government, security institutions, etc.) and tamper Iranian influence. Iran will likely apply more pressure on Iraq to have a prime minister and government that will preserve its interests. Many Iraqis believe Iran has enough diversified assets (political, security, economic and social) in Iraq to leverage and feel comfortable that it will have enough allies in the parliament and government to protect its interests.

Iraqi leaders have expressed concerns about being caught between a rock and a hard place when it comes to US-Iran dynamics, not wanting to choose sides.