The “Copenhagen Wheel” is designed to help give riders a boost up steep hills like in San Francisco. Cyclists still have to pedal to get the extra thrust.

I bike to work ... sometimes. I have a series of big hills — in each direction — that just kill me. So when I heard about a new, shiny red wheel born in the labs of the Massachusetts Institute of Technology, I was intrigued.

“Everything is contained within the red hub: the battery, the motor, all the sensors,” says Megan Morrow, with the company Superpedestrian in Cambridge, Massachusetts, the maker of the “Copenhagen Wheel.”

The wheel is named for a challenge by the mayor of the Danish capital to get more people biking.

The Copenhagen Wheel is part of a quickly growing trend in Europe and China, and one in its nascent stages in the US: electric bicycles, or e-bikes. We’re not talking about less-powerful motorcycles. These are bikes that have small motors to give you a little extra thrust as you pedal.

The Copenhagen Wheel measures a rider’s biometrics as they ride. “The torque, the cadence, the power that they’re putting onto those pedals,” says Morrow. “It kind of crunches those numbers and figures out exactly how much motorized assistance to give the rider. And it’s doing that at about 100 times a second.”

The motor stops giving you a boost after 25 mph. You can go 30 miles on a charge.

I wanted to see this wheel in action, so I went out for a ride with Jon O’Toole, also with Superpedestrian. 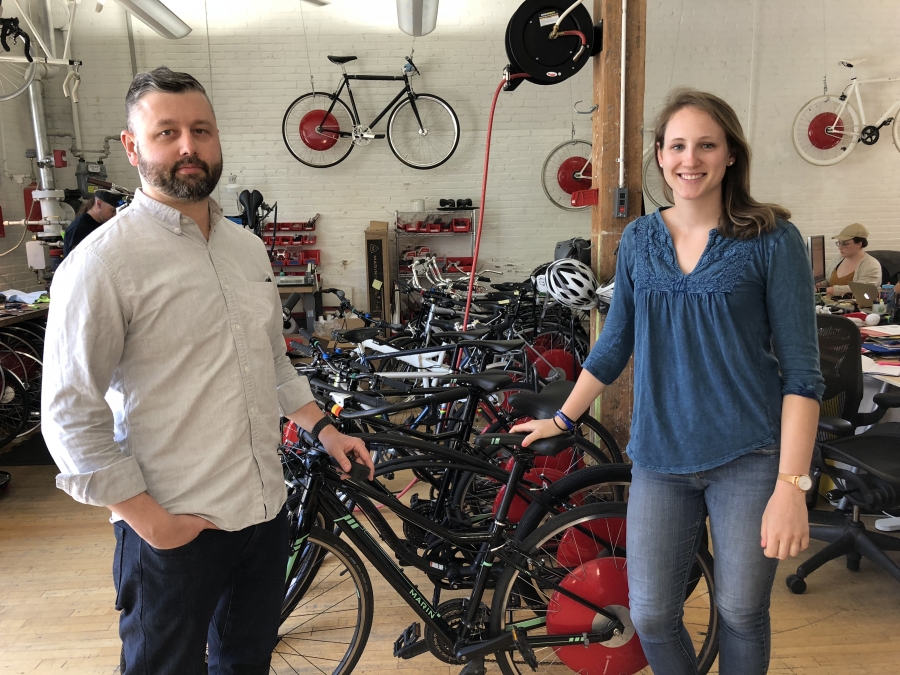 Megan Morrow and Jon O’Toole at Superpedestrian’s offices in Cambridge, Massachusetts. Customers can purchase just the wheel and put it on an existing bike, or buy an entire new bicycle.

I felt the thrust right away. We got up to 20 mph in a few seconds. (Your smartphone on your handlebars can provide instant feedback on your speed.) We came across a slight upgrade with no problem.

But I wanted to make sure it could conquer the big hills — the ones that keep me from cycling to work more often. So, O’Toole took us to the nearby city of Somerville.

“It’s a serious hill,” says O’Toole staring up at the road. “Personally, I would probably avoid this hill and go a longer route because that’s how steep it is. But with the Copenhagen Wheel, you should be able to glide up it pretty effortlessly.”

About 90 seconds after, we were going 13 mph and dusting off the top of the hill. We crushed it.

My thighs weren’t burning, I wasn’t winded, the ride was smooth and it was fun. It was still a workout, yet, this feeling kept nagging at me: Is this cheating?

“We hear that from pure cyclists pretty often,” says O’Toole. “But that’s not necessarily the audience we’re exclusively going after.”

Superpedestrian’s target market is commuters, people like O’Toole himself.

“If I was to take a car every day to my commute, which is 2.1 miles, it would take around 30 minutes to get through the city to where I work. When I take the Copenhagen Wheel, it’s 12 minutes, door to door. And that gives me more time to get home to see my daughter, my 1-year-old daughter. That’s important to me. If that’s cheating, then so be it.”

What about the perspective of a serious cyclist?

“We don’t see it as cheating. We see it as something that helps you,” says Klaus Bondam, CEO of the Danish Cyclists’ Federation, a group formed in 1905.

“Especially in the commute from the suburb to the city, the e-bike is an extremely efficient, good alternative to sitting and stopping in a car queue, and having to pay a lot of money for parking,” says Bondam. “We know also from scientific research that you do actually get exercise from being on an e-bike.”

Bondam says sales of e-bikes have gone “up and up and up” over the past two years in Europe, and not just in cycling centers like Copenhagen and Amsterdam.

“You also see a big increase in countries like Germany and Norway,” says Bondam. “And especially Sweden.”

Starting Jan. 1, Swedes are now able to deduct 25 percent of the price of an e-bike from their taxes.

The Copenhagen Wheel stops providing a boost at 25 mph. It's currently shipped to customers throughout Europe, Canada and the US.

The advantages to more e-bikes and fewer cars on the road are fairly obvious: less congestion and air pollution, fewer greenhouse gasses spewing from tailpipes, and more active, healthier people. Still, Bondam says the explosion of e-bikes has brought problems — they make people feel like they’re stronger cyclists than they really are.

“We have seen an increasing number of seniors getting fatally injured, getting killed on e-bikes. I think six or seven of them were over 80-years-old,” says Bondham.

Bondam says some cars are also now misjudging the speed of cyclists, which can create problems for motorists timing their turns. He believes technology will eventually sort this out.

“We will see technology in the future where the bicycle can communicate to your GPS in the car saying that this bicycle is moving at this speed, please be aware when you arrive at the intersection.”

In the here and now, there’s an even bigger safety challenge facing e-bikes in the United States: infrastructure.

“Our cities are just not built for really what people perceive as safe bicycling,” says Ben Welle, the global manager of road safety issues with the World Resources Institute in Washington.

Welle says if people are already hesitant to get on a regular bicycle, he doesn’t think they’ll be likely to jump on an e-bike, which can be harder to maneuver.

“The situation of the American city is just not built for, what I see right now, scaling this up to a really big deal,” says Welle.

That said, Welle says many American cities have made strides with cycling infrastructure in recent years. And he himself rides e-bikes as part of Washington’s new e-bike sharing service.

But there’s one last problem: cost. E-bikes typically sell for about $1,500 to $2,000, at least — that’s a lot more expensive than most traditional bikes. But Jon O’Toole with the Copenhagen Wheel says don’t look at the comparison that way.

Still, no matter how cool an e-bike might be, it’s not a car. Then again, maybe ditching the car for a bike is a good thing.

“You just feel better,” says O’Toole hopping off his e-bike at the end of our ride. “Feels like you can start and end the day much happier than sitting in Boston traffic.”