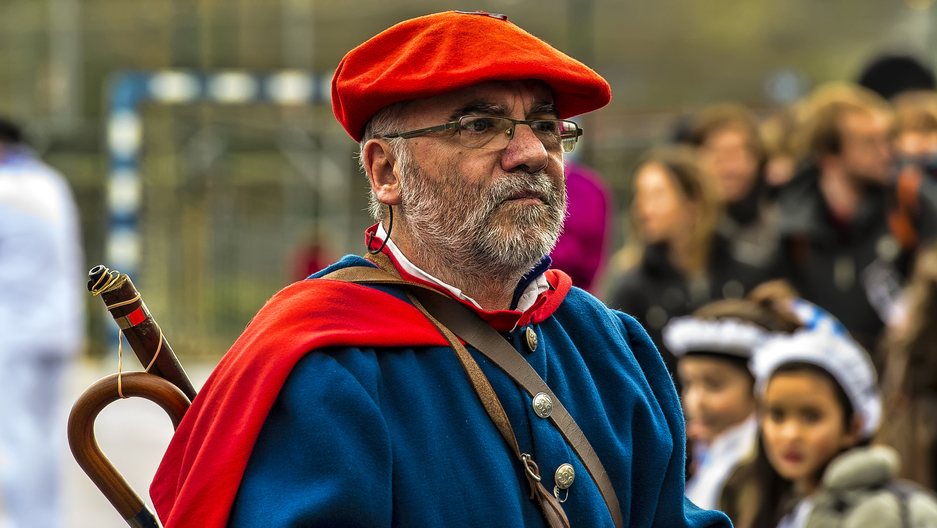 A man in traditional Basque dress.

Basque is a language isolate.

Spoken in a region that spans northern Spain and across the border into southern France, it is not part of the Indo-European language family. It’s not related to Spanish or French or German or Greek or any known language. The origins of the language are a bit of mystery. In fact, you can almost hear the history of the European continent in the language according to Basque language scholar Xabier Irujo.

This week on the podcast we talk about Basque. With more than six dialects, how did Basque develop a language standard? How did this language survive the military dictatorship of Francisco Franco when speaking, writing and reading it were illegal? How has this minority language thrived and even grown in the years since Franco’s dictatorship ended? And what does the future hold?

And if you have a spare 40 minutes, this Orson Welles documentary about Basque is super fascinating.

00:12 The story of Bingen Ametzaga’s escape from occupied Europe and Francisco Franco’s dictatorship.

01:13 Xabier Irujo is Ametzaga’s grandson and the director of Basque Studies at the University of Nevada, Reno.

04:08 The origins of Basque are a bit of a mystery. It’s a pre-Indo-European language.

07:16 Resurrección María de Azkue was the first president of the Basque Language Academy and he advocated for creating a standard Basque based on the Gipuzkoan dialect.

08:49 Basque was illegal in Spain under the military dictatorship of Francisco Franco.

10:35 Alan King is a Basque speaker who has been on the Euskaltzaindia’s (Basque Language Academy) grammar committee since 1980. He moved to Basque Country in 1978.

12:00 Before 1968 in Basque Country there was a situation of diglossia.

14:30 Euskara Batua was developed as a standard language by a respected Basque linguist Koldo Mitxelena.

16:40 October 1968 Basque linguists and intellectuals met at Arantzazu, a monastery in Basque Country to vote of Batua as the language standard.

20:05 Begotxu Olaizola feels different in each language that she speaks and she speaks many.

22:48 Begotxu is a Basque teacher at an ikastola at a small town outside of San Sebastian.

23:10 Ikastolas are Basque schools that were forbidden during Franco’s dictatorship.

26:00 Despite the success of Basque, Begotxu still worries about the future of Basque.

27:38 All the little things that make speaking Basque “tiring.”

31:35 Xabier Irujo was born in exile in Venezuela and started going to Basque school in Venezuela.

32:05 What happened to Bingen Ametzaga’s translation of Macbeth?