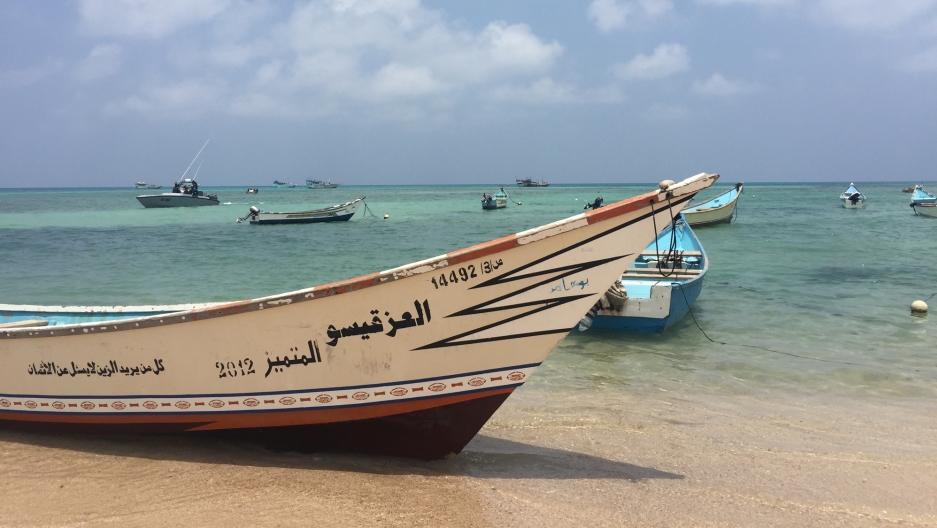 Arab governments are in conflict over an island paradise in the Indian Ocean that few people have ever seen. Socotra, the largest island in the Middle East, is one of the most isolated places on Earth, home to an ancient culture and some of the world's strangest-looking plants.

The island is part of Yemen, but the United Arab Emirates have been investing there, building infrastructure. On April 30, the UAE flew soldiers and tanks to a landing strip on Socotra. The UAE's intentions are far from clear. And that is raising concern about the future of Socotra and its rare natural wonders.

Socotris stand beneath a dragon's blood tree on the Dixum Plateau, Socotra, Yemen.

The stars of Socotra's otherworldly landscape are its dragon's blood trees.

"They're thousands of years old," says multimedia journalist Lucy Towers, who just returned from the island, "but what makes them so special — and gives them their name, dragon's blood — is that the sap is crimson."

The sap of a dragon's blood tree is crimson.

"It's been used for hundreds of years by those living on the island for medicine, paint, makeup, varnish," she says. "And you see these [trees] dotted around the island."

The United Nations designated Socotra a World Heritage site in 2008 in recognition of its biodiversity. Hundreds of Socotra's species of plants, reptiles and land snails exist nowhere else on Earth.

Often called the Galapagos of the Indian Ocean, Socotra is 200 miles off Yemen's southern coast. To date, it has escaped the violence rocking the mainland, be it from the civil war, al-Qaeda or ISIS.

But observers fear that Socotra's natural treasures could be endangered if war comes to the island.

A bottle tree in bloom amid dragon's blood trees on Socotra.

At the end of 2014 on the Yemeni mainland, a group of Yemeni rebels known as the Houthis overthrew the Yemeni government. Over the next several months, they captured nearly every city in Yemen as they moved to Aden, on the southern coast. As fighting intensified in March 2015, the United Arab Emirates entered the war alongside a coalition of Arab countries determined to restore the deposed Yemeni president to power.

"Yemen's government [was] preoccupied with the conflict on the mainland," Towers says. "And so the UAE stepped in."

The UAE has not stepped back out.

"There's been rumors for a couple of years that the United Arab Emirates is on the island, that they've started investing in the island,"  Towers says. "They admitted in 2017 that they've got a military presence on the island. So we really wanted to know: Are these rumors true?"

In April this year, Towers and reporter Bethan McKernan of the UK paper The Independent chose to investigate the rumors about the UAE's growing presence on Socotra. Getting there was no easy feat. Traveling as tourists, the pair boarded a dhow in Oman and sailed for two and a half days across the Indian Ocean — sharing their ride with a cargo of cement. Towers recorded the voyage.

Why take a plane to #Socotra when you can spend 55 hours on a cement Dhow from #Oman? Myself @mck_beth, the crew of 13 Gujarati sailors, some chickens, goats and the open water. 2.5 days condensed...watch for dolphins. pic.twitter.com/fW9Fm3K7eg

Towers says that while the war has not come to Socotra, its effects are readily apparent. Flights to the island are infrequent and unreliable. Travel to the island by sea is arduous. Four years into the Yemen war, Socotra's tourism industry has gone dormant.

"Before the war broke out, there were estimates that about 5,000-6,000 tourists [were] visiting Socotra every year," says Towers. "Since then, you walk along the main street in Hadiboh, the capital, and tourist centers [have] shut up shop. Nothing's open. There's a tourist shop that sells souvenirs, and the souvenirs have dust all over them. I don't know who last bought anything from them, but they were really pleased to see us."

A restaurant in Hadiboh, the capital of Socotra, Yemen.

During their week on Socotra, Towers and McKernon saw the influence of the UAE wherever they went.

"We saw UAE flags in many places: on tops of houses, schools and buildings that had obviously been built with UAE money," says Towers.

On the coastal road between Hadiboh and the beach town, Qalansiyah, several images of the Emirati flag are painted on the side of a mountain.

The flags of the United Arab Emirates (left) and Yemen are painted side-by-side on the face of a mountain on Socotra, Yemen.

This painting includes the legend "Thank you to the children of Zayed," a reference to Sheikh Zayed bin Sultan Al Nahyan, the late emir of Abu Dhabi and founder of the United Arab Emirates.

Following the collapse of the Yemeni economy, assistance from the UAE has been welcomed by some Socotri.

"What [I have seen] is livelihoods improving and community developments," wrote Abduljameel, who lives on Socotra.

He said via WhatsApp in January this year that Socotris accept Emirati help and don't ask questions. "[The] UAE presence, I do not know if there is any hidden intentions or if there are some secrets behind their work," he wrote. "I judge based on what I see."

The United Arab Emirates built a new port on Socotra.

The UAE has built the Socotris a new hospital, a new housing development and a new port.

"It's an extension to the old port, and that's the important part," says Towers. "They've almost doubled the size."

Last year, Emirati officials confirmed what had long been rumored: that the UAE had been using Socotra as a training site for military troops headed for battle on the mainland.

After the UAE beefed up its military presence on Socotra on April 30, word got around, on and off island.

One Socotri tweeted in Arabic, "work is afoot."

Yemeni state media called the UAE deployment an occupation. The UAE called the Yemeni reaction a "malignant media campaign." Saudi Arabia sent emissaries to Socotra and met with Yemeni and Emirati officials there to try to ease tensions.

And the international community was left scratching their heads.

UNESCO spokesperson Agnes Bardon said they are considering sending a mission to the island, "provided the security clearance is granted by the United Nations, to get a fact-based report of the situation and recommend all necessary measures, if needed."

A former US ambassador to Yemen, Gerald Feierstein, posted a tweet asking why the UAE was on Socotra now.

The UAE occupation of Socotra is controversial bc no one understands the reason for it. There are no Houthis or AQ there. UNSCR 2216 protects Yemen’s unity and territorial integrity. That applies to the Emirates, too. https://t.co/xlreTCwkNq

The tussle between the United Arab Emirates and the Yemeni government provides a diplomatic challenge for the United States, which supports both Arab governments in their allied war against Yemen's Houthi rebels. And the US relies on both governments for their cooperation in its efforts to combat the Yemeni branch of al-Qaeda.

On Wednesday, the US State Department came out with a statement that urged both sides to scale back the rhetoric. "Yemen cannot afford further divisions," it concludes. "The United States calls on all parties to the conflict to focus on and embrace the UN-led political process, with the unified aim of a safe, secure, and prosperous Yemen."

But the ramped-up hostility between the UAE and Yemen has nonetheless caused people on Socotra to pick sides.

This week, Socotris have been massing for demonstrations.

They've been protesting against the UAE (waving Yemeni flags)...

Today, a massive protest broke out in #Socotra, a #Yemeni Island against #UAE’s forces. The protesters demanded #Emirati_troops withdraw from the island and chanted slogans in support of Yemen's government. They also called the #Yemeni government to protect Socotra. pic.twitter.com/LqGMrfhhMk

... and protesting against the Yemeni government (with UAE and Southern Resistance flags).

"You really have a divide on the island," Towers says, "between those who have welcomed the Emirates and see that the island needs development. And with [those Socotris] wanting to stay part of Yemen."

But regardless of which side Socotris favor, Towers says they have at least one thing in common: "People on Socotra do not want to be drawn into the war in Yemen."