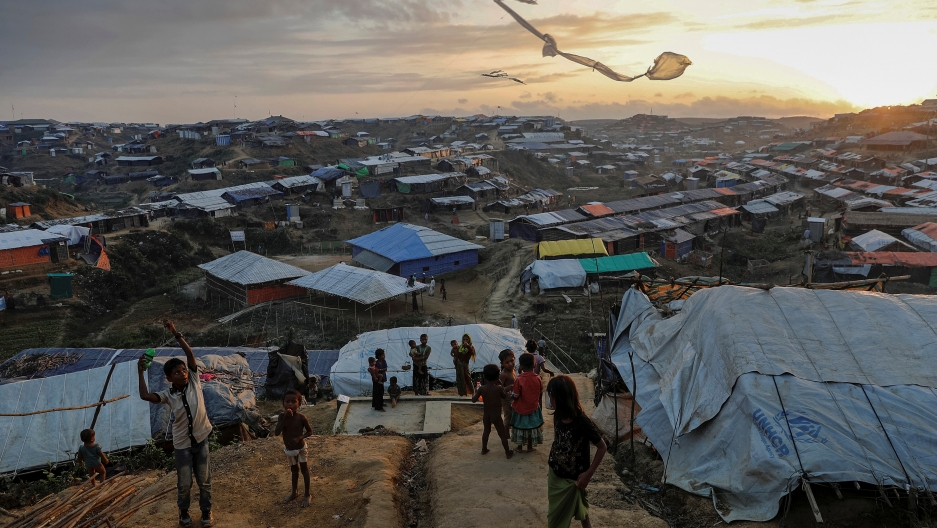 About 700,000 Rohingya refugees to date have fled a brutal military crackdown in Myanmar.

They're an ethnic minority in the country, and since last year, there have been reports of hundreds of Rohingya villages being burned, and widespread rape and murder.

Many of the refugees crossed the border into Bangladesh. The UN has called the camp there the largest and most densely populated in the world. So when Dr. Baseer Qazi went to help out in the refugee camps in Bangladesh, he knew that resources were desperately needed.

Qazi is a doctor at Advocate Lutheran General Hospital in Park Ridge, Illinois. Back in March, he spent 10 days in Bangladesh on a "medical mission trip" with the Deccan Alumni Association of North America.

The World spoke to Dr. Qazi about his experience.

Tell us a little bit about this medical mission. What were your main goals?

We're trying to send two or three doctors a week. I was able to go in the first week of March, along with me was my friend Dr. Habib Shaikh, who's an oncologist here locally, and Dr. Syed Zaffer, from Florida, who brought his son; he's a first-year medical student. The trips are one week in duration each. They include staffing a medical clinic. We're blessed to have some good partners locally there in Bangladesh called Hope Foundation, and we are helping staff one of the clinics of the Hope Foundation. We also help the humanitarian aspect with food distribution, and one big project that we were involved with was the clean drinking water project.

Tell us about the conditions in the refugee camps in Cox's Bazaar. I mean, there are hundreds of thousands of Rohingya there. What are they dealing with?

Cox's Bazaar is the main city port for aid workers to stay. It's a 90-minute drive to the refugee camps, and when you travel from the city, you see the roads kind of dissipate, and you get on these dirt roads and the conditions just become pretty bleak. The most astonishing thing is, there's such a great amount of people in a small concentrated area. You go to these areas within the camp and you've got a whole family living in the small room, 10x10, 12x12. The roofing is temporary; you can't even stand in there. There's no electricity, there's no running water, there's no proper sanitation. You're asking for infectious disease to really, especially when the monsoon comes, to be rampant in these areas. The need is very dire. The World Food Program has called it the largest camp in the world, if you just take it by sheer numbers.

From a medical standpoint, what occupied most of your time? Was it injuries the refugee sustained during the violence in Myanmar, or fleeing it? Or was it just the poor conditions in the camps themselves?

I think things have evolved with time. Obviously, the summer of 2017 is when people saw a lot of the trauma, the post-traumatic stress disorder, the sheer fear of death. I went there a little bit later in March and what I saw was kind of the aftermath, where people are trying to get some normalcy within their life. As far as diseases that we saw, a whole host of malnutrition in various forms, with anemia, vitamin deficiencies. We also saw infectious diseases including mumps, chicken pox and other things. One particular case that I saw was a female who came in with shoulder pain, and as I got more comfortable within the camps, I was able to get a more detailed history through our translators. And this lady was about 70 years old, and no one really figured out what her shoulder pain was from, but after getting a detailed history we found out that when she was leaving Myanmar, when the soldiers took his rifle and actually hit her with the rifle. And that's the reason — it's the trauma from the actual shear injury that she sustained. So we were able to transfer her to get better orthopedic care, to a field hospital. I think once [we spent] a day or two within the camps, we started getting more detailed histories, and we could realize what these individuals have gone through.

How many patients did you see during your time there?

So an average day at the clinic would normally start around 9, about a 90-minute drive into the camp site, and we were in makeshift tents and we would see about 45 to 50 patients. We had access to some basic labs, like a urinalysis and blood sugar. We did have a pharmacy, but that's about it. We were communicating well with the different teams — we had a list of common diagnoses we were going to see, so that really helped out.

Dr. Qazi, you mentioned the translator you had with you. What were the kinds of stories you heard from patients?

The mass exodus in August was the key, because most of these patients, they walked all the way across from Myanmar to Bangladesh. And the horror stories you heard in between; I mean, they would tear up and I would try to get a better history through the translator, but at the same time, I was trying to be cognizant of their feelings as well, and not try to bring back bad memories. But sometimes in the line of trying to get an adequate diagnosis, you need to kind of do that. And I knew, especially when seeing female patients that are pregnant — which we saw plenty of — the fear was, were they raped? They're coming to us for medical help, we didn't want to reintroduce the horror that they had faced. Post-traumatic stress disorder is a big diagnosis there and we're trying to address those issues in a more systematic way by including psychiatric care. Anxiety, depression — these are all pretty rampant within the refugee camps, as one would expect.

Do you think the camps are ready for what's about to happen?

I don't think so. I mean, I think the monsoon season is one of the largest potential catastrophes. The government is trying — I mean, the Bangladeshi government. I really admire the work they are trying to do. The UN is there, the WHO, many, many international agencies are there. They're trying to relocate 100,000 refugees — this was already being done while I was there — to safer levels, because the expectation is, unfortunately, with the monsoon season approaching, is catastrophic loss of life. And obviously, when the waters come, there’s increased risk of infectious diseases — salmonella, shigella, also the risk of malaria and so on and so forth.

If there's one thing, one image, one snapshot from your trip that you want people to know about what's happening with the Rohingya and in these camps in Bangladesh, what would it be?

For me personally, the most catastrophic experience was seeing these little kids, 9 years old, 6 years old, 5 years old, walking into the clinic — no shoes, poor hygiene, poor dental hygiene. I wouldn't say they're completely malnourished, but you know they're undernourished at least. And just seeing that picture day in and day out, that was the most difficult thing, especially having young kids [myself]. And you just figure — that could have been my kid right there. That was the most difficult part of my trip. The children of Rohingya are going to be a lost generation if we don't act in a longer-term goal mindset. What I mean by that is: Setting goals for their nutrition, for their education and setting goals for their well-being.