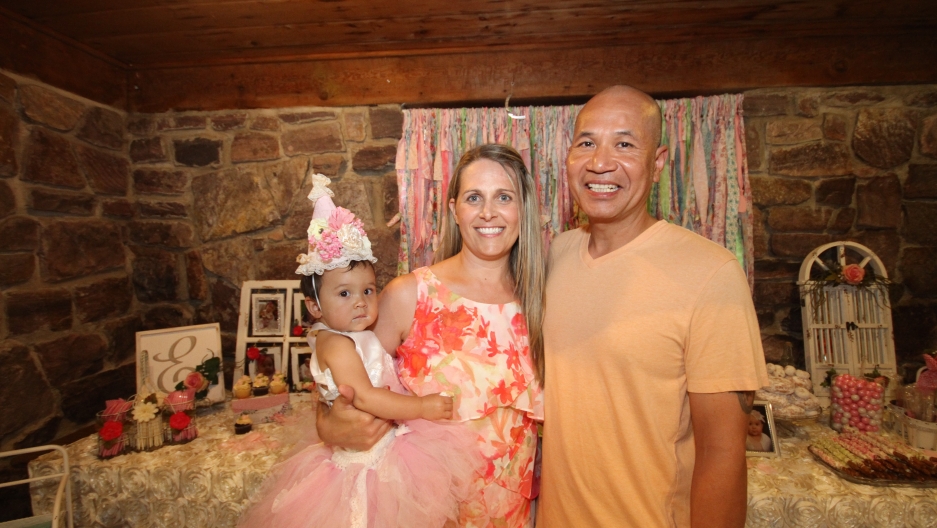 Sothy Kum was detained by Immigration and Custom Enforcement in December 2016. He was released in time to celebrate his daughter’s first birthday, with his wife Lisa Kum, in August 2017 at Devil’s Lake State Park in Baraboo, Wisconsin. Sothy, who came to the US from Cambodia at age 2, was detained again that October and deported in April 2018.

Lisa Kum has an endless list of tasks every day. The 41-year-old from Cottage Grove, Wisconsin, has a 19-month-old daughter and a high school-aged son. She’s also tending to her health after undergoing elbow surgery earlier this year.

Nowadays, she’s also busy growing her business that sells refurbished HP printer parts — so that she can sell it and move her family to Cambodia. That’s because Kum’s husband, Sothy Kum, was deported to Cambodia, a country he left when he was just 2 years old. She plans to shut down the small business they started together four years ago and start over 8,000 miles away.

“It's pretty much been pure hell,” she says. “It’s very emotional. At the same time, you have to get up every morning and keep going because what other choice do you have?”

Sothy was among 43 immigrants repatriated in early April; the advocacy organization Asian Americans Advancing Justice says it’s the largest group of people deported at one time to Cambodia since the country started accepting deportees from the US in the early 2000s.

From fiscal years 2003 through 2016, 750 people were deported to Cambodia in total, according to Immigration and Customs Enforcement (ICE) data collected by the Transactional Records Access Clearinghouse. Katrina Dizon Mariategue, immigration policy manager with the Southeast Asia Resource Action Center (SEARAC), said in a statement that about 200 Cambodian immigrants are expected to be deported in 2018 alone.

Advocates say deportations of Cambodian immigrants are not only increasing, but also happening faster. It used to take months to deport someone — Sothy’s case took almost two years — but now it takes just a few weeks.

“A lot of people were picked up and a week later told they were being deported and people did not have a chance to talk to an attorney,” says Anoop Prasad, a lawyer with Asian Americans Advancing Justice.

In December 2017, a judge halted the deportation of about 50 Cambodian immigrants, a move that allowed some of them to talk with lawyers and attempt to argue their case. But the stay, which prevented their deportations, ended in February.

Lisa says her husband spent most of the last two years in immigration detention, almost as long as their young daughter has been alive. Sothy and his family fled Cambodia as refugees and spent years in camps, first in Thailand and then the Philippines. He arrived in the US in 1981, when he was about 6 years old.

Lisa and Sothy met in 2009 when they worked at the same company. In 2014, they decided to quit their jobs and take the financial risk of starting their own business. Sothy allowed an acquaintance to pay him to send marijuana to his house. He was convicted of possession of marijuana with the intent to deliver.

After serving his one-year sentence in 2016, Sothy was again detained by ICE. Though Sothy was a legal permanent resident with a green card, his conviction made him deportable. He remained in ICE detention until August 2017, when he was released just in time to see his daughter turn 1 and to marry Lisa. But by October 2017, Sothy was back in custody.

Historically, the Cambodian government has been hesitant about accepting deportees because many of them left the country at a very young age or were born elsewhere. Many do not have proper documentation to prove they are Cambodian citizens.

Mariategue from SEARAC says many Cambodian immigrants who have deportation orders came to the US as refugees and settled with their families in poor or violent neighborhoods, without much resettlement support. Their parents were focused on everyday survival and sometimes dealing with the trauma of having experienced a war. The civil rights organization has reported that many children have ended up in the criminal justice system without knowing that it could affect their immigration status. In 1996, the US also passed stricter laws that made anyone with a criminal record deportable, part of the Illegal Immigration and Immigrant Responsibility Act (IIRIRA) signed by President Bill Clinton. But because Cambodia did not accept people deported from the US, very few Cambodians were actually deported.

“For the longest time these individuals have been living in the country basically as Americans,” says Mariategue. “They just didn't know that there would be deportation consequences to their actions.”

In 2002, Cambodia and the US signed an agreement that allowed the country to receive deportees. But the Cambodian government continued to accept anywhere between 30 to fewer than 100 people. In 2017, the US stopped issuing visas for high-ranking Cambodian diplomats to protest that they were not issuing travel documents to people whom the US wanted to deport.

According to the Department of Homeland Security in September 2017, “There are more than 1,900 Cambodian nationals residing in the United States who are subject to a final order of removal, of whom 1,412 have criminal convictions.”

Advocates say that pressuring the Cambodian government to accept more detainees is a departure from previous administrations. The Cambodian government wants to change its 2002 memorandum of understanding with the US to look more like agreements with other countries. The Vietnamese government, for example, has an agreement that prevents repatriation of anyone who arrived in the US before 1995, which is meant to protect refugees.

Also: Some Vietnamese immigrants were protected from deportation, but the Trump administration may be changing that policy

Bombing raids conducted by the US drew Cambodia into the Vietnam War in the late 1960s. The raids galvanized Communists in Cambodia, called the Khmer Rouge, who eventually seized the country in 1975. The brutal regime then carried out killings that resulted in the deaths of millions of Cambodians. The US subsequently accepted Cambodian refugees from the mid-1970s through the early 1990s.

A recent Supreme Court ruling could provide some relief to Cambodians who currently have deportation orders. The ruling found that citing a “crime of violence” as the basis for deporting someone is too vague. Holly Cooper, a lawyer with the Immigration Law Clinic at the University of California, Davis, says the ruling could affect a small number of Cambodians with removal orders. Some refugees of the Vietnam War, including Cambodians, receive deportation orders after serving prison sentences for a broad array of felonies — though not always crimes in which they physically harmed someone — that the Department of Homeland Security considers “crimes of violence.” The latest ruling could impact their immigration cases, if that crime is the only reason for their deportation.

Sophea Phea, co-founder of a 1Love Cambodia, a volunteer-run organization assisting deportees in Phnom Penh, says sending immigrants to a country they fled as children or have not set foot in does not make sense. Phea herself was repatriated to Cambodia in 2011. She was born in a refugee camp in Thailand and came to the US as a refugee at age 1. She was deported after serving prison time for credit card fraud. Phea never became a naturalized citizen because her family was focused on survival.

“Getting a job and all that was just enough,” Phea says. “We make mistakes and some of us do get locked up and pay time and do time for our mistakes. I've done that. But for us to be deported to a land we've never been to, to a land that our parents fled from?”

The effects on a deportee's family members are apparent. Elderly parents worry about their children going to a country that they remember to be full of suffering and death. Children of deportees grow up without their parents. Relationships become strained.

Phea has a 14-year-old son; he was 8 when she was deported. She says her son visited her once, but it was uncomfortable and confusing. “I’m not there physically for him and he’s growing up to be a teenager, a young man,” she says.

Lisa Kum and her family decided to move to Cambodia because they did not want their young daughter to grow up without a father. Lisa has two other sons from a previous relationship, and Sothy also has a son from a previous marriage. When Lisa’s younger son goes to college next year, she and her daughter will reunite with Sothy.

Until then, she’s slowly packing up her life in Wisconsin. She can’t help but look forward to a new beginning.

“[ICE] can't hurt him anymore,” she says. “Now we just have to move forward and heal.”

“I’m not angry anymore. It’s a peaceful time,” he says. “Just make the best of the situation. It happened already.”

Next: An American family finds their way in Mexico after deportation