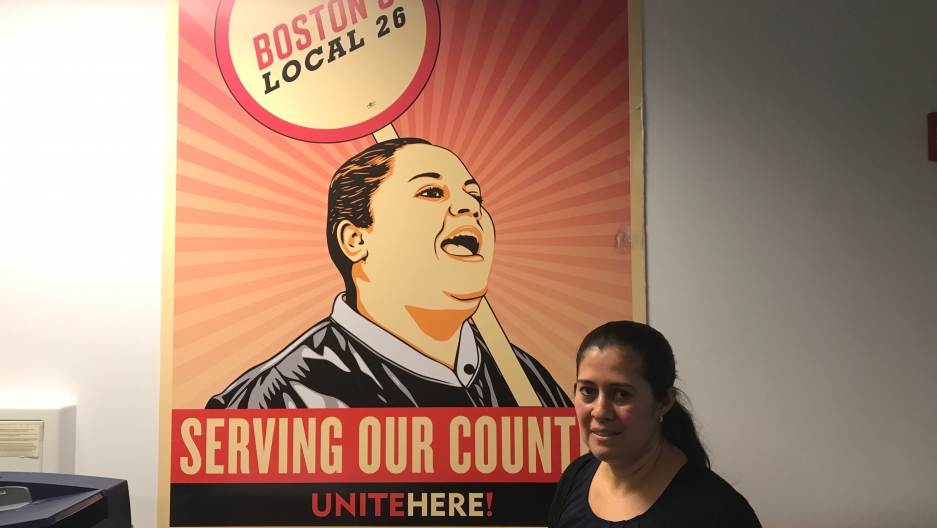 Martha Bonilla at the offices of UNITE-HERE Local 26, in Medford, Massachusetts, where she works as an organizer. Bonilla has lived in the US for more than 23 years and worked at Harvard University dining halls for 17 years.

The American labor movement is in trouble.

Unions have lost millions of members since the 1980s. Many union jobs were in dying industries or were automated or shipped overseas. States have passed laws that limit union activities. Now, a case before the Supreme Court could deal another blow, denying public sector unions a major source of their funding.

And then there’s the Trump administration’s decision to end Temporary Protected Status, or TPS, for hundreds of thousands of immigrants. The status is a form of humanitarian relief for people unable to return to their home countries because of natural disasters, disease outbreaks, famine or war. Without TPS, immigrants who have lived in the United States for years, decades in some cases, may be subject to deportation and their ability to work in the US legally.

Unions worry that people stripped of TPS will lose their jobs and weaken membership among some of the country's more active unions. Take Service Employees International Union (SEIU), whose members include cleaners, maintenance workers, doormen, security officers and food service workers. The union’s membership almost doubled in the first decade of the century, while most other unions shrank.

Doris Reina-Landaverde is a prominent leader of SEIU Local 32B, concentrated in the Northeast. She speaks at rallies in Massachusetts, representing the union and showing solidarity with prisoners, students, fellow workers and fellow immigrants.

For 12 years, she was a unionized Harvard custodian, cleaning offices and classrooms. That is set to change next year, when she will most likely lose her platform, her job, and her union membership.

In 2001, Reina-Landaverde got TPS, which let her stay and work in the US legally after major earthquakes struck El Salvador. But the Trump administration is letting that protection expire next year, arguing that the country has recovered from the quakes and that it is time for Salvadorans to return home, despite having built lives in the US.

Now, Reina-Landaverde is facing possible unemployment and deportation to El Salvador, a foreign land to her children and husband.

And the future of the union?

“Oh, they will lose a lot of members,” Reina-Landaverde says.

It’s not clear how many, but she believes hundreds of her union’s 18,000 members in New England have TPS, and many work at Harvard. She says they’ll all drop out of the union because they’ll lose their jobs.

It’s a similar story for Massachusetts-based UNITE HERE Local 26, the union of hotel and restaurant workers. Edward Childs is a cook at a Harvard dining hall and a Local 26 leader. The union is majority immigrant, and Childs says that without TPS, many union leaders and members will be lost.

“If you lose a thousand workers, and you only have 10,000 workers, you’ve lost a lot of your membership.” he says. “The union will be in total disarray.”

It’s one reason unions are lobbying hard to protect the status of immigrant members.

It’s a relatively new fight for unions, says Robert Forrant, a labor historian at the UMass Lowell. He says the US labor movement “does not have a glorious history of standing at the barricades for civil and political rights for people that looked slightly different than the heads of most of the really big labor unions.”

But he says things are different now.

One change was at the end of the 20th century, when the AFL-CIO, the union federation, went from supporting sanctions on employers who hired undocumented workers, to opposing them.

In recent years, Forrant says, the unions that have grown are largely in sectors with a lot of immigrant workers. He says it’s made labor and immigrant issues more intertwined.

“I don’t think in 2018 you can say you’re for workers’ rights if you’re not also saying you’re for immigrants’ rights,” he says. “You cannot separate the two.”

Forrant adds that Latin American immigrants often play key union roles because of their language skills and their cultures.

In South and Central America, he says, “a lot of union organizing really revolves around family … house-to-house organizing, having lots of house meetings and barbecues. There’s a flavor to it, other than just sort of starkly walking up to somebody on the job and saying, ‘Are you for or against the union? Will you sign this card?’”

As for Reina-Landaverde, she says it took time for her to realize her importance in the union. “But one thing I learned is the union, we are the people,” she says. “All the workers together, we are the union.”

She has rallied co-workers to speak out against an abusive supervisor, who was then fired. She pressed management to provide mental illness sensitivity training to reduce workplace bullying. She also helped organize Harvard custodians to demonstrate for a better contract, and to support dining hall workers on their first strike in 30 years.

Among that strike’s leaders were immigrants like Martha Bonilla, an organizer with UNITE HERE, from El Salvador, who worked 12-hour days at Harvard cafeterias. She says it was tough to keep the strike going. It also touched close to home, since her husband was a co-worker.

She managed to convince him and others.

After three weeks on strike, the union declared victory.

Now Bonilla and Reina-Landaverde are on to their next big fight — to stay in the union, and the United States.