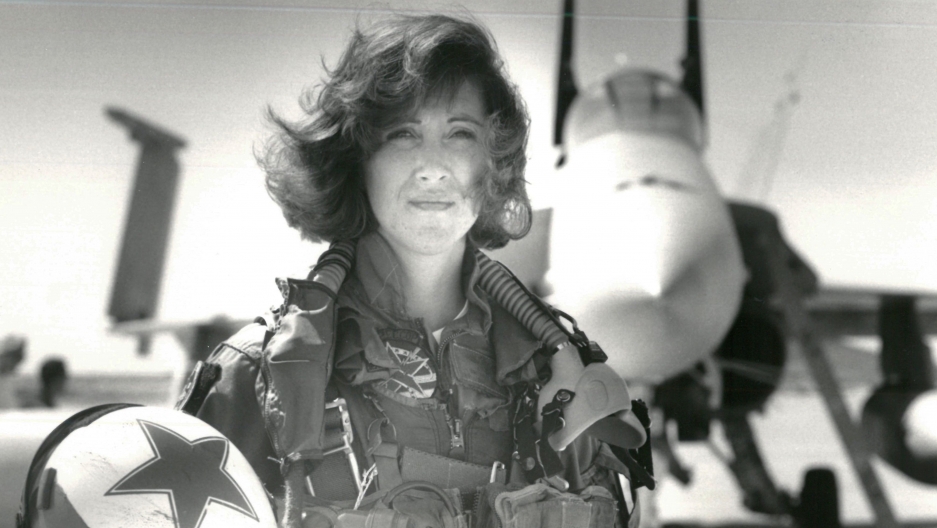 When I heard the story of Southwest Airlines Flight 1380's emergency landing, I suddenly remembered the moment of eerie silence when an engine-fire indicator lit up in my jet’s cockpit. The small, amber light glowed amid a panel of dark buttons, knobs and switches — and I froze.

A second later, after catching the movement of the instructor pilot to my left, I swiftly snapped the air mask on my helmet over my nose and mouth, tightened the harness holding me into my ejection seat and keyed the radio to begin procedures for an emergency landing. Once safely on the ground, the engine’s melted fuel lines confirmed it was about 10 seconds from exploding midair.

I also recalled the moment, at the start of my military career, when a more senior officer questioned my ability to succeed at flight school — because I was a woman. I still regret not more adamantly defending a girl’s place in the cockpit but take quiet pride in my whispered response: “I think I’ll be fine.”

In short, I know how significant it is that the hero of Southwest Airlines Flight 1380, Capt. Tammie Jo Shults, is a woman. And why this pilot’s nightmare needs to be a bedtime story for young girls everywhere.

Not just because of the technical skill she displayed in saving 148 people during one of the most extreme aircraft emergencies possible and preventing a bigger disaster with more loss of life. Nor because how she handled herself, both during and after her plane's emergency landing, demonstrated a level of poise, confidence, and acumen any pilot — any person — should aspire to.

But because Shults did so having overcome countless barriers as one of the US Navy’s first female fighter pilots and among the 6.4 percent of commercial airline pilots who are women.

For school-age girls, like those at the all-girls school that I now lead, the harrowing tale of a plane’s blown engine and the heroine who saved the day is filled with lessons they need to hear now as much as ever.

Talking about Shults’s perseverance, not her achievements, can help girls reframe their own response to difficulty or failure. Lessons like this nurture resilience and help them push through adversity and, ultimately, give young women the resolve needed to continue in fields like engineering, finance and yes, aviation. It also prepares girls to confidently stand their ground later in life, whatever profession they pursue, whatever gender bias they may face. Whether in a cockpit, boardroom or bar.

Southwest Airlines Flight 1380 is also the tale of an expert pilot saving the day then pausing to thank the air traffic controllers who helped along the way and, after landing, walking up and down the aisle of her plane to check on every passenger. Teaching young girls emotional intelligence is crucial to their future success, in work and in life. Talking about the captain's interactions with her crew and her passengers — and even her public response to the outpouring of support since the flight’s emergency landing — brings to life the daily lessons we provide our students about essential social, emotional and interpersonal skills.

At its core, it’s the story of a powerful yet relatable female role model in a male-dominated field. Of a strong heroine, with a flowing ponytail, who followed her passion into one of the most steadfast old boys' clubs around.

Even in 2018, young girls need more women to look up to, particularly for fields like finance and entrepreneurship, politics and computer science, where women continue to lag behind men in nearly every metric imaginable. Studies demonstrate a direct relationship between the visible presence of female leaders and young girls aspiring to fill leadership roles, and show that women benefit from same-gender role models more than men. Over time, stories like those of Capt. Tammie Jo Shults help set the stage for the next generation to close gender gaps that have remained staunchly in place for decades.

That’s why every parent should make certain their daughter knows about this bold female pilot who saved the day. Young girls still need more Tammies in their bedtime stories.

Marisa Porges, PhD, is head of school at The Baldwin School, an all-girls independent school in Bryn Mawr, Pennsylvania, and formerly flew jets in the US Navy.