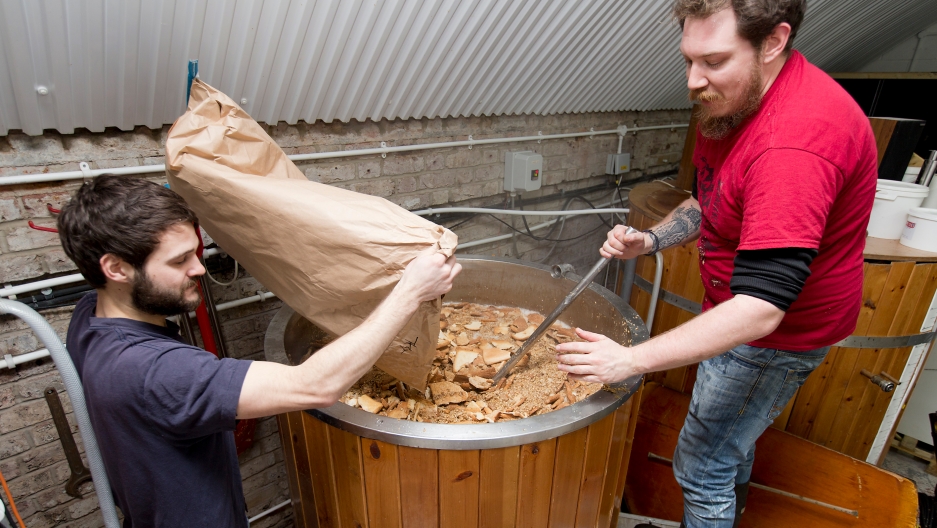 Toast Ale brews its commercial ales with surplus bread at a brewery in Yorkshire. It also pairs up local breweries and bakeries to help them tackle food waste in their own communities.

It’s a Wednesday night in central London and the trendy Temple Brew House pub is packed with people out for after-work beers and burgers.

A crowd in one corner is sipping intently from half-pint tasting glasses, savoring a beer they helped brew about a month earlier using an unusual ingredient: leftover bread.

“We got a lesson in brewing as well as a lesson in using the bread for it,” says Michael Mulcahy, who helped tear up about 200 loaves of bread into chunks to make the amber ale he’s sipping. “Today, we get to taste what came out of it.” 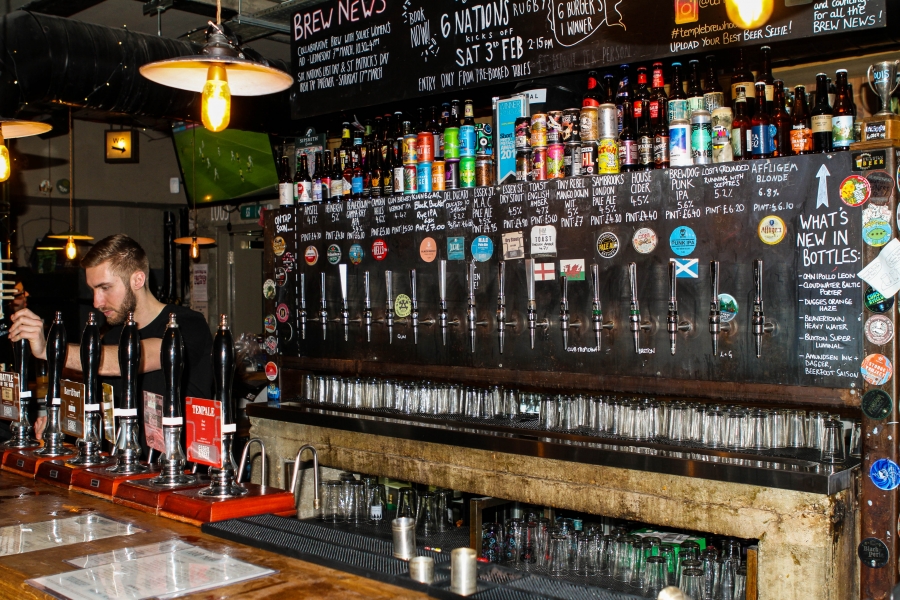 Toast Ale’s small-batch brew is on tap at the Temple Brew House in central London at a March 2018 tasting event. It was the seventh collaboration between the pub, Toast Ale and The Flour Station.

The beer was brewed at the pub’s tiny in-house brewery in collaboration with Toast Ale, a British craft beer company that uses waste bread to make beer on a commercial scale.

“In the UK, 44 percent of all bread is wasted,” says Toast Ale’s chief brand and finance officer Louisa Ziane. “So we take surplus bread from bakeries and sandwich makers, and we replace a third of the barley that would otherwise have been used to brew, upcycling bread that would have otherwise been wasted.”

That bread provides some of the sugars that turn into alcohol during brewing, cutting down on the amount of fresh barley needed.

Related: When life gives you rain, make beer with it

The tradition of brewing beer with bread goes back thousands of years, but Toast drew its inspiration from a modern batch made by the Brussels Beer Project.

Toast launched in 2016 and sells its commercial ales at grocery stores and restaurants around the UK. Once the company starts turning a profit, it plans to donate those profits to Feedback, a charity that fights against food waste and shares a founder, Tristram Stuart, with the beer brand. (The company says it’s been able to make donations to Feedback already through its local collaborations.)

“Beer is a really fun medium to engage people on what is globally a very important problem,” Ziane says.

Around the world, about one-third of the food that’s produced ends up going to waste. That’s a big problem for the world’s hungry, but it’s also a big contributor to climate change: Producing that food emits as much greenhouse gases as many individual countries.

Toast’s commercial beers are produced at a brewery in the north of England that uses the heels of bread normally discarded by a catering company that makes sandwiches.

But Toast is also trying to spread the gospel of brewing with waste bread by sponsoring smaller, local collaborations like the one in March at the Temple Brew House.

“We recognize that there are bakeries up and down the country who are left with surplus bread at the end of the day, and there are also over 2,000 breweries in the UK,” Ziane says, so Toast is playing matchmaker with these local bakeries and breweries.

The Flour Station, a small London chain with two retail locations and a wholesale bakery, donated a van full of leftover bread for the beer that was on tap at the recent tasting. It was the seventh batch the Flour Station and Temple Brew House have brewed together.

“If a customer cancels an order or if a mistake is made on an order, there’s nothing we can do once the dough is mixed to take that back again,” says The Flour Station’s Tara Griffin, who estimates about 1 to 2 percent of the bread the company bakes ends up going to waste. 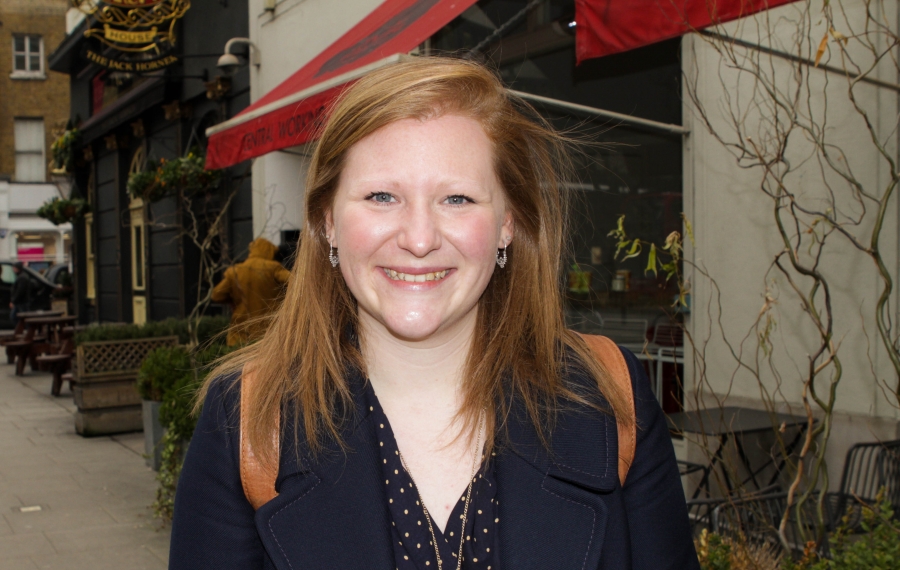 Tara Griffin, with The Flour Station bakery in London, says about 1 to 2 percent of the bread her company bakes goes to waste.

A food charity picks up unsold loaves at the chain’s two retail locations in London, but the company hasn’t found anyone interested in the large and irregular batches of mistakes from their wholesale bakery.

"Because bread has a short shelf life it’s not the easiest product to move on to someone else,” Griffin says. “A lot of homeless shelters look for cans or packaged food that is easier to keep for a longer period.”

Toast says it works with bakeries to make sure they’ve exhausted the options to get bread to people who would eat it before agreeing to turn it into beer.

“There is so much bread being wasted that we don’t need to take it away from people who could eat it, and our priority is to get it to people,” Ziane says.

Vanesa de Blas, head brewer at the Temple Brew House’s Essex Street Brewery, says as long as she uses bread with neutral flavors — wheats, whites, sourdoughs and the like — replacing some of the malted barley with bread in a beer recipe doesn’t change its taste much.

During brewing, the bread gets ripped up into chunks and thrown into the hot water along with barley to make what’s called the “mash.” Most of the bread dissolves in the hot water, and the crusts are strained off along with the malted barley solids prior to fermentation. 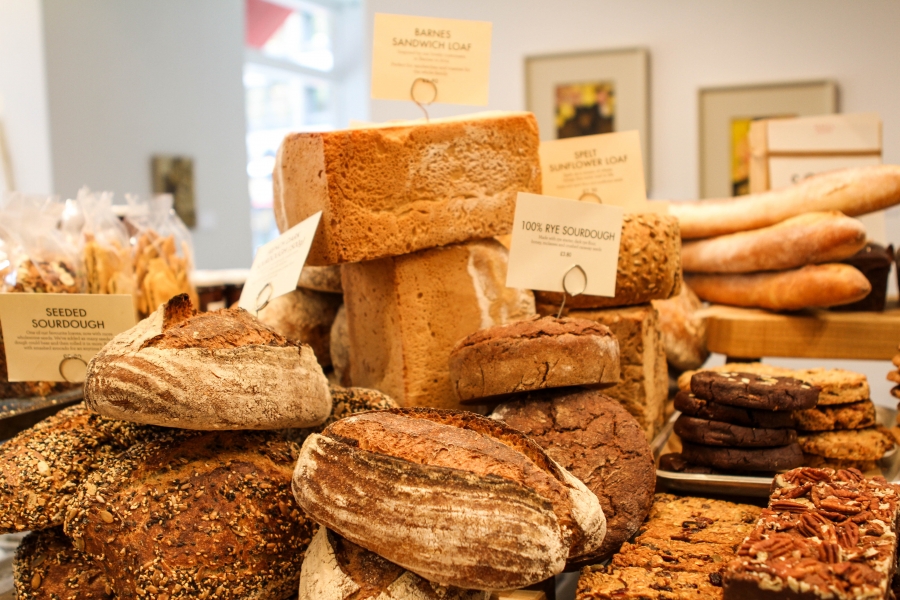 Toast Ale says 44 percent of the UK’s bread ends up going to waste.

De Blas says the biggest difference between brewing just with barley and adding bread to the mix is that it’s a lot harder than usual to stir up the mash.

“It floats on top and it makes it really difficult [to stir],” de Blas says. “It’s really hard work. So instead of mashing in about half an hour, it takes you an hour and a half to mash, and it’s quite a lot of effort.”

Michael Mulcahy, who helped stir up that mash with a red plastic shovel, called the work “back-breaking.”

But he likes that the result, a beer brewed with surplus bread, is bringing conversations about food waste into the mainstream.

“It takes it away from being a hippie environmentalist thing,” Mulcahy says. “It’s the pub. It’s the guys at the bar drinking beer, it’s football and baseball.”

Toast’s beer recipe is online for home-brewers to try, and the company has franchised or licensed its brand in South Africa, Brazil and Iceland.

Last year they expanded to the New York City area, where Toast Ale is sold in bars, restaurants, and grocery stores.