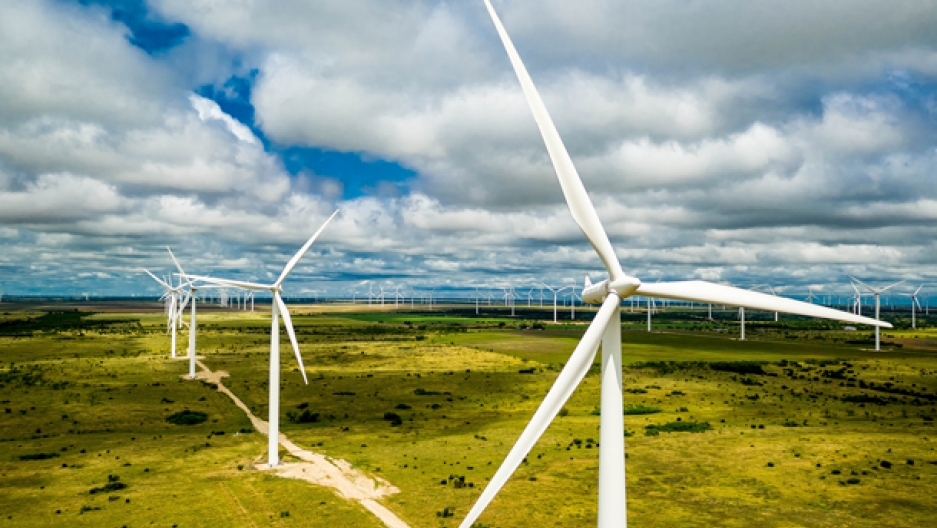 A Texas wind farm. Wind energy is now the second-largest power source in the Lone Star State after natural gas and increasingly important for many state economies. While President Trump asked for sharp reductions in renewable energy programs for the 2018 appropriations bill, a bipartisan deal crafted in Congress increased funding for renewable energy.

Government agencies from the Environmental Protection Agency to the National Oceanic and Atmospheric Administration to the United States Geological Survey are breathing sighs of relief, as they will keep their federal funding or even see budget increases, thanks to a bipartisan federal spending measure enacted March 23.

A coalition of center-right Republicans and center-left Democrats voted to boost a cap on defense and domestic spending, making room for more funding for everything from fighter jets to renewable energy research. The vote also stripped most of the 80 anti-environmental measures known as riders.

There's a lot of good news in this budget for people concerned about science, the environment and climate change, says Marianne Lavelle, a Washington reporter for InsideClimate News.

The EPA, for example, faced a 30 percent cut under the budget proposed by the Trump administration. The agency had already lost 700 employees through buyouts, and the cuts would have cost an additional 2,000 jobs, but "Congress said no to that and kept them at their current budget,” Lavelle explains. “They have fewer employees than they did at the beginning of the Trump administration, but it could have been a lot worse.”

The Trump administration had wanted to get rid of USGS’s climate centers, but that, too, didn’t happen. The USGS has done some of the nation's most important studies on sea-level rise and its impact on the coasts, so research is crucial to many states, Lavelle says.

The Department of Energy also fared better than expected. The Office of Renewable Energy and Energy Efficiency faced a 70 percent cut under the Trump plan, but now it actually gets a nearly 13 percent increase.

New technologies, along with wind and solar energy, have become important businesses in both red and blue states, Lavelle says. This explains why Congress voted to save the program called ARPA-E — or Advanced Research Programs Agency-Energy, which seeds early stage development in clean energy. The Trump administration wanted to eliminate this program, saying the private sector should be doing this research.

“Well, of course, the private sector does not invest in early-state research,” Lavelle points out. “Congress felt this was a really important thing to continue to invest in. They increased that budget 15 percent.”

NOAA, which also does climate research — an unpopular type of science under this administration — was looking at a $1 billion cut, but they, too, received an increase. “It's hard to overstate how important NOAA’s research is to coastal communities,” Lavelle says. “What Congress did with NOAA shows how important this is to their constituents, whether Republican or Democrat.”

The spending bill also removed numerous “riders" that were a cause of great concern among scientists, conservationists and environmentalists. Most were eliminated by Republican leaders in order to get the Democratic votes they needed to pass the budget, Lavelle says. These included many endangered species riders and the methane rule rider — which Lavelle says is “a really big deal.”

"Next to the Clean Power Plan, one of the biggest steps the Obama administration took on climate change was [writing] several rules on methane,” Lavelle says. “The Obama administration saw this as an easy thing to do on climate, because all you're really doing is preventing leaks in the pipes and in the infrastructure, just some new monitoring requirements, some better wrenches and pipes.”

One of the Trump administration’s first actions was to undo these methane regulations. So far, they have not succeeded, though Secretary of the Interior Ryan Zinke continues trying to get rid of methane regulations through the ordinary rule-making process.

“Although they have won this battle, the war is not over," Lavelle warns. "Because in almost every case the Trump administration is going forward on a whole variety of fronts to undo [environmental] regulations.”

“Eternal vigilance seems to be the mood in the environmental community,” she adds. “[After the budget passed], I would say there was a brief sigh of relief, followed by more determination to keep up with what the Trump administration is doing, especially when it comes to climate change.”