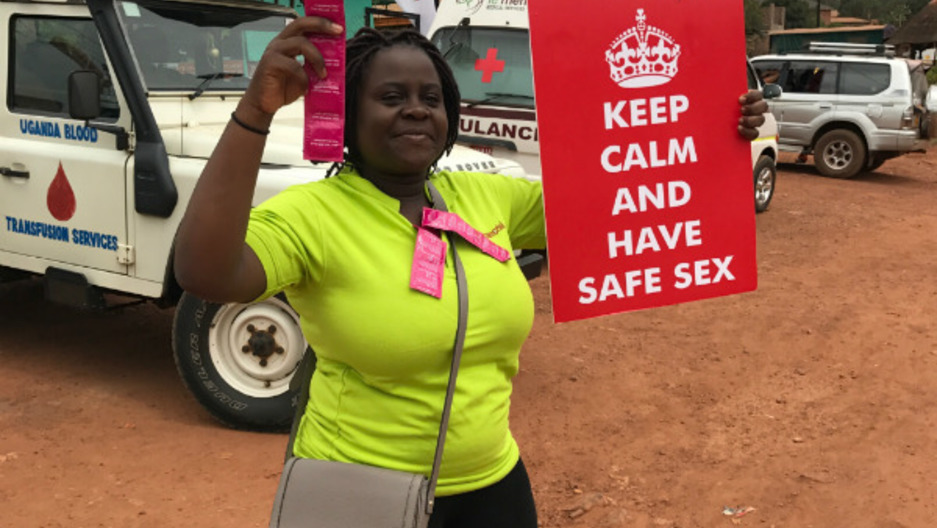 Diana Namumbejja Abwoye is shown promoting condom use on the streets of Kampala.

"Our Bodies, Ourselves" has long been called the bible for women's health, but it didn't start out that way.

The iconic book — revolutionary when it was first published in 1970 — began as a 193-page booklet, put together by a group of women in the Boston area who shared their knowledge and experiences about their health and bodies. By 1973, it moved from the underground press to a major publishing house, Simon & Schuster, where it went mainstream and quickly became a bestseller. Since its humble beginnings, "Our Bodies, Ourselves" has been published around the globe and translated into 31 languages and counting.

Times and business models do change, however.

Earlier this month, the Our Bodies, Ourselves Collective (OBOS), which publishes updated versions of the book, announced it would stop doing so. To be clear, the book will still be published, but it won't release new versions. The 2011 update will be its last.

OBOS explains in an email: "Much of the content of 2011 and previous books relating to the experiences of women of all ages with reproduction, sexuality, and other key women's health issues is still highly relevant today."

In addition to relevancy, OBOS says financial reasons and a changing business model are also to blame.

Through the years, "Our Bodies, Ourselves" has had a huge impact on women, both in the US and abroad. Four women who've translated or adapted the book over the past decade tell The World how they've interpreted the text for their specific countries. Read what they have to say below.

Diana Namumbejja Abwoye started translating the Ugandan version of "Our Bodies, Ourselves" in 2012.  That was a year after she received a copy of the book as a birthday present.

She says she had "never read anything about women's health, sexuality and birth control. So, when I read this book, I learned so much. It changed my life. So, I wanted to pass on this information to other women."

The chapter on birth control really spoke to Abwoye because "there are so many women in Uganda [who] have unwanted pregnancies." Abortion is illegal in Uganda. So Abwoye felt information about condom use, including female condoms, intrauterine devices and other birth control options would "help them prevent these unwanted pregnancies in the first place." This was particularly important among married women, who could use birth control without their partners knowing it.

Khuat Thu Hong adapted "Our Bodies, Ourselves" into Vietnamese. It encompasses three volumes. (Other versions of the book are not necessarily direct translations, but adapted or reinterpreted for women in particular countries. They emphasize different topics.)

What Hong found most interesting was the chapter on body image, because in Vietnam, she says, "women are very obsessed with their body." There are a lot of ads about beauty, and Hong says many women "feel really upset about the way they look." So she hopes the chapter on body image will make women aware of these glamour ads and "to be careful about what these advertisements tells them is beautiful."

The Bengali, or Bangla, version of "Our Bodies, Ourselves" was contextualized by Shamita Das Dasgupta. And like other adaptations, Dasgupta included a section that's not found in the English version — about skin-whitening creams.

She says, "This is something that has become extremely popular in West Bengal. The industry is huge. The idea is that your skin will become white, and it's basically a bleaching product."

She included it "to make people aware of the issues behind it. Part of it is, of course, that dark skin is beautiful ... but also the health hazards that are there, that crop up as women use a bleaching product on their face or their body, constantly."

Dana Weinberg is one of the founders of Women and Their Bodies, a nongovernmental group in Israel that is part of the OBOS international network of women's health organizations.

In 2011, they published two books, one in Hebrew, the other in Arabic. The books don't cover all the same things. Weinberg says she needed to be culturally sensitive to the country's Israeli Jewish culture and Palestinian Muslim and Christian cultures.

It was so challenging for Weinberg that she had a hard time finding a "group of writers who would agree and want to write about the decision not to be a mother in Israel."

For the Arabic version, Weinberg focused on "issues that we found in no other resources in Arabic, such as abortion and menopause." For the menopause chapter, it was hard to find words to describe it because in Arabic, the common phrasing is alsini yas." Translation? "The years of despair." The name of "this stage of women's life represents the cultural and social representation and attitudes towards it," she explains.

Weinberg mentions an Orthodox rabbi who bought the book for his wife and ending up reading it himself. In doing so, he became aware "how little he knows about women's health, women's sexuality, about women's needs and challenges regarding their body," she says. He now references the book when women come to his office to talk about personal issues, such as contraception, menstruation and Judaism.

All four of these women agree that "Our Bodies, Ourselves" changed women's lives. It's made them aware of their bodies, health, societal and cultural pressures. It's also changed the way women talk to their mothers, daughters, friends and some of the men in their lives.

Despite financial setbacks and a changing business model, more translations/adaptions of "Our Bodies, Ourselves" are underway. Current projects are ongoing in Morocco, Mongolia and Indonesia. As incoming board chair Judy Norsigian says via email, "The global reach of OBOS is one of its most important and enduring legacies."