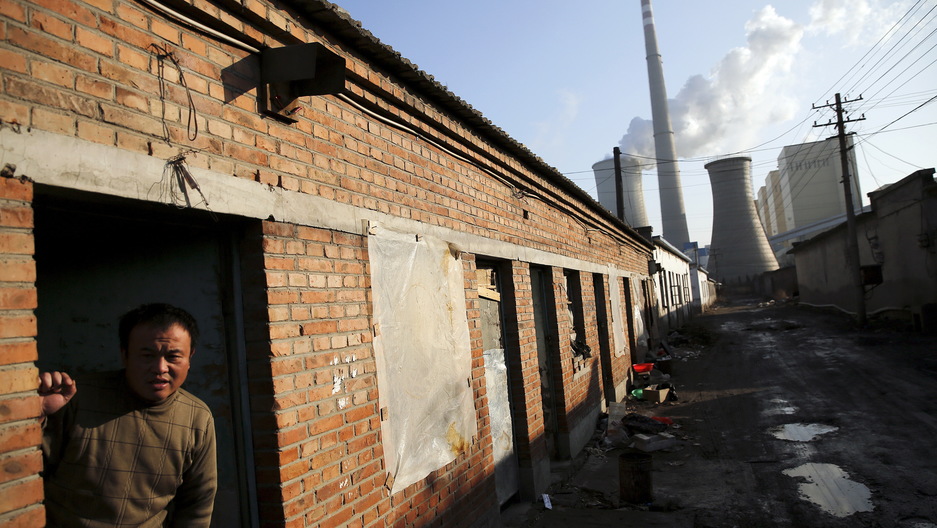 A migrant worker steps outside in an area next to a coal power plant in Beijing, 2015.

A study from Columbia University has found notable differences in the DNA of neonatal babies born after a coal plant in China was shut down, compared with babies born in the same place while the plant was still operating and polluting the surrounding air.

Dr. Frederica Perera and Dr. Deliang Tang, researchers at Columbia University’s Mailman School of Public Health, found that babies born during the coal plant’s operation had shorter telomeres than those born after the plant’s closure — a result which seemed to validate the Chinese government's push to reduce air pollution.

“Telomeres are repeated sequences of DNA that form a kind of cap on the ends of chromosomes and preserve the integrity of those chromosomes,” Perera says. “It's been seen, mostly in adults, that shorter telomeres are associated with cardiovascular illness, premature aging, cognitive decline and certain cancers. So, you want to have longer telomeres.”

The study was the first to look into the "very early window, in [placental or umbilical] cord blood, when babies are first born,” Perera says. “We used this particular biologic marker because we could use it to see whether this was an additional benefit of closing a polluting coal plant.”

Over the years, scientists have found many benefits of reducing pollution, and this is just the latest one, Perera says. Earlier studies found that polycyclic aromatic hydrocarbons (PAHs), a pollutant in coal plant emissions, latched onto DNA at lower levels in the cohort of babies born after the plant had shut down, indicating less exposure. They also found that levels of the protein BDNF, which is involved in early brain development, were significantly higher.

The new results are “the third chapter in this story,” Perera says, “where we looked at this novel biomarker called telomeres and asked the same question: Is there a difference? Do we see longer telomeres after the plant was shut down, meaning those babies did not have prenatal exposure to these particular combustion byproducts? And was the air pollution associated with shorter telomeres? The answer to both of those questions was yes.”

After the power plant was shut down, air motoring data showed significant reduction of PAH concentrations. “The reduced air pollution improved the children's health in different ways, in terms of physical and neural development,” Tang notes. “And a lot of those neural development issues are not reversible.”

Based on results in the new study, Perera says, “we think we can document the full spectrum of benefits, including to children's short- and long-term health and functioning over their whole lifetimes, and [quantify] those, along with the conventional adult diseases and costs avoided.”

In a previous study, Perera and Tang also demonstrated the economic benefits of air pollution reductions, especially in regard to health costs.

“There is a perception that reducing environmental pollution may have a negative impact on local economics, but actually, our evidence, focused on the health costs alone, shows there is a tremendous improvement, in terms of the economic situation,” Tang says.

The Chinese government has responded positively to the team’s research. “We are very proud to be one of the few environmental study teams operating in China that are successful, and our study designs a way to document the effectiveness of the government policy,” he says.

China faces a nationwide challenge around environmental health issues, and the government cites the team’s studies as proof that air pollution reductions have benefits. This brings hope to many cities in China, Tang says. “As long as we're committed, the pollution can be reduced and the population health can be improved,” he says.

“It's a good news story,” Perera says. “It's a bit different from what we've done up to now, which is usually to tell the bad news, to document the associations between pollution and adverse health effects in children later on. Here, we had a nice opportunity to show good news and benefits of an intervention [by] the government when they shut this plant down.”