Artist Bren Bataclan at the BCNC Pao Arts Center in Boston at an exhibition of his work.

Bren Bataclan is an artist whose goal is to make you smile. Read on to learn exactly how he does that, but here's some background first.

Bataclan was born in the Philippines and moved to the United States with his family in 1981. He was 12 years old when they arrived, and together they all settled in Daly City. That's a section of San Francisco with a large Filipino population. The excitement of their arrival is depicted in Bataclan's painting "Daly City, Our New Home." 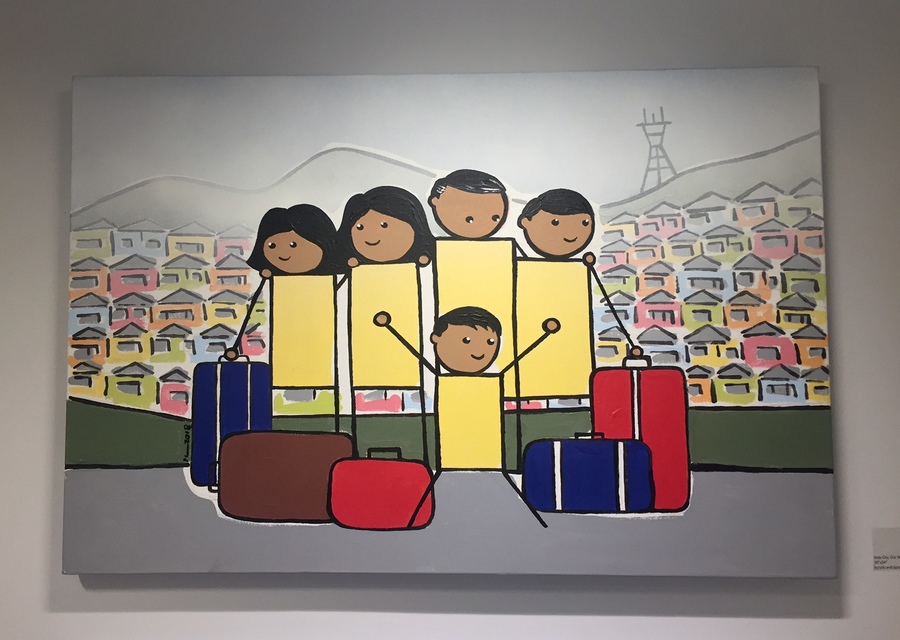 This is just one of his works currently on display at the Pao Arts Center in Boston's Chinatown. Through the exhibit, which is called "Kulap: New Works by Bren Bataclan," the artist portrays and shares his immigrant experience.

Kulap means "fog" in Bataclan's native Tagalog. And as the exhibit states: The "fog encompasses the literal fog of the coastal hills, the cultural fog of a new immigrant's surroundings, and the fog of confusion and anxiety prompted by recent anti-immigrant rhetoric ..."

One painting portrays an experience Bataclan encountered a few years ago while driving alone on an empty road in West Virginia.

"It was probably one of the scariest experiences I have ever had ... I locked eyes with a whole bunch of teenagers and I saw them all doing racist, Asian gestures ... eventually they did leave me alone, but hands-down that was kind-of one of the most frightening experiences I've ever had," Bataclan says. 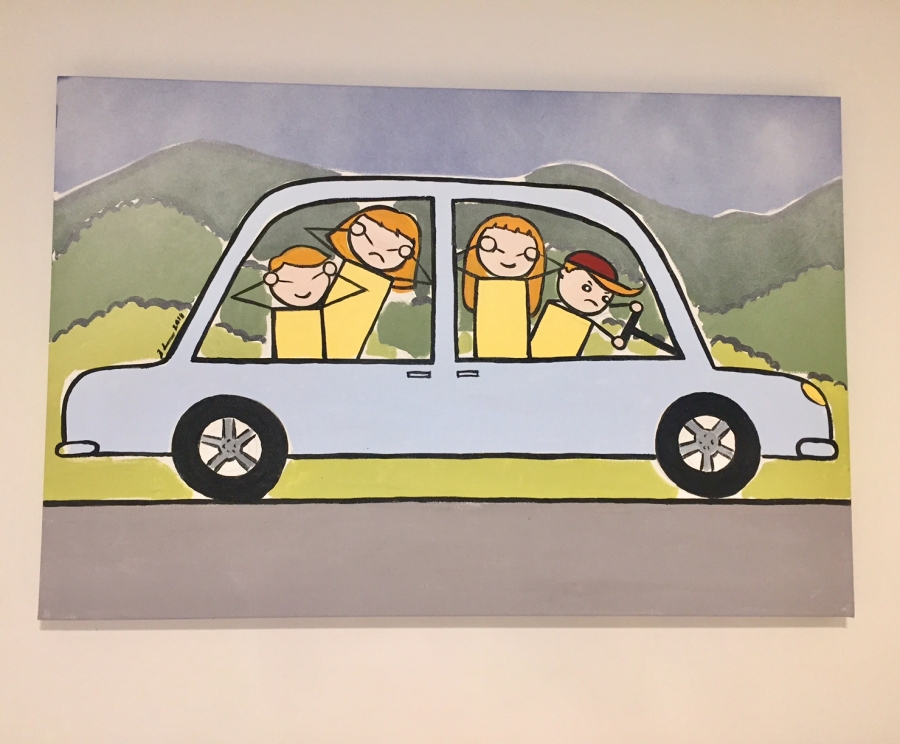 An addendum to the exhibit is a print of a new work titled "Liberty for All." Commissioned right after the 2016 US presidential election, a family in Acton, Massachusetts, asked Bataclan to buy the biggest canvas he could find and paint whatever he'd like about how he feels about the election. The family cleared a wall for the painting.

They didn’t give Bataclan any guidelines or a timeframe. So initially, he waited.

"I’m glad I waited. I think if I painted right then and there, there would have been a lot of anger and negative things," he says. "It took me a week, and I dug deep. And I tried to be as positive and hopeful and compassionate as possible. And, what I ended up painting was the Statue of Liberty, kind of comforting really vulnerable people."

The painting features a person to represent each of several marginalized groups: African Americans, Jews, Muslims, Mexican Americans, a gay man and a woman. It also depicts the Syrian boy pulled from the rubble of an Aleppo bombing whose image from the back of an ambulance became famous.

Bataclan's larger artistic goal is to make people smile. One way he achieves this is to give some of his paintings away. They've reached people everywhere from Austria to Uganda, from Aruba to Wales.

It started as a street project 15 years ago. Now Bataclan estimates he's given away close to 3,000 paintings in 70 countries. He even gave one to Leni Robredo, the vice president of the Philippines.

Now Bataclan wants to give two of his paintings to you. All you have to do is share an experience, somewhere in the world, that made you and others smile. Tell us about it, either here or on our Facebook page. Bataclan will choose two of his favorites, and we'll send you a painting.