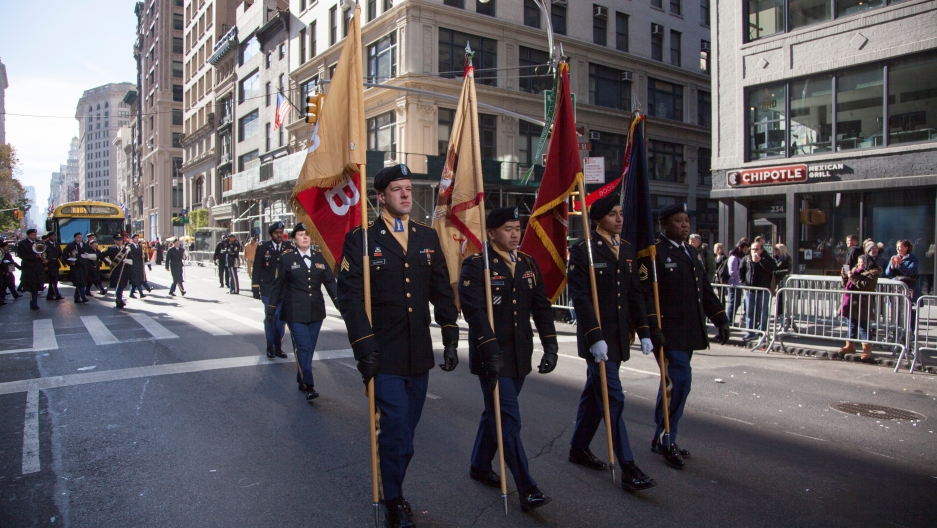 The New York Attorney General’s office has joined Virginia officials in investigating a veterans organization that spends nearly all of the money it raises on telemarketing consultants and its own leader’s salary.

The nonprofit Center for American Homeless Veterans must give New York officials documents “relevant and material to an investigation and inquiry, undertaken in the public interest, of CAHV’s solicitation of charitable contributions,” according to documents obtained by the Center for Public Integrity.

Sarah Rutherford, a spokesperson for New York Attorney General Eric Schneiderman, declined to comment when asked about the undated documents: “As for this matter, we do not comment on ongoing investigations and for that reason we can’t provide any further information.”

The Center for American Homeless Veterans and two sister organizations run by the same man — retired Army Maj. Brian Arthur Hampton — together have raised millions of dollars from donors across the country, but very little of the money goes to veterans themselves, the Center for Public Integrity reported in December. Most people who donate to groups run by Hampton make modest contributions in response to telemarketing calls, direct mail or other such solicitations.

Virginia Attorney General Mark Herring’s office confirmed in February that it also is investigating the Center for American Homeless Veterans, alleging the charity “has engaged in misleading donors to believe funds would be used for veterans-assistance programs and organizations, when funds were not used for those purposes.”

It is illegal in both Virginia and New York — Hampton’s groups are registered to fundraise in these and most other US states — to lie to donors about how their money will be spent.

Rep. Walter B. Jones of North Carolina in February asked the leaders of two US House committees to launch an investigation into “bad actors” who mislead donors and enrich themselves in the name of military veterans. He cited the Center for Public Integrity’s investigation into Hampton’s veterans operation and media reports about other veterans charities.

Congressional officials and a spokesman for the Virginia attorney general’s office did not respond to requests for updates.

In an April fundraising letter purportedly signed by Hampton and obtained by the Center for Public Integrity, Hampton tells prospective donors that Center for American Homeless Veterans is supporting programs that are successful in “getting homeless veterans off the street and into productive lives.”

But the Center for American Homeless Veterans’ tax return offers little evidence that the organization is funding or otherwise directly supporting such endeavors. Its 2015 tax return indicates it provided just $200 in grants to other organizations out of $2.5 million in overall expenditures, the vast majority of which paid telemarketers.

Federal Election Commission filings released this week show Hampton continues to pump thousands of dollars into his own pocket from the Put Vets First! Political Action Committee, which he runs out of the same Falls Church, Virginia, office as the Center for American Homeless Veterans and the Circle of Friends for American Veterans.

Hampton paid himself $27,240 from his Put Vets First! Political Action Committee from Jan. 1 through March 31, according to the FEC filing.

Hampton rapidly increased Put Vets First! Political Action Committee payments to himself late last year, following a Center for Public Integrity investigation into his political and charitable operations. He paid himself $20,350 in December 2017 alone — more than three times his compensation in December 2016, according to disclosures filed with the Federal Election Commission.

Few leaders of federal PACs earn that much money.

This does not include money he receives from his two nonprofit veterans groups. The latest federal income tax records available for Hampton’s two nonprofit groups indicate he also earned about $340,000 total from the Center for American Homeless Veterans and the Circle of Friends for American Veterans during 2016.

Hampton, who has four decades of fundraising experience, has said his salary is justified because of the number of hours he works leading three groups.

“I am the head of three organizations,” Hampton said previously. “I am always working.”

Hampton’s PAC reported raising $701,000 and spending $730,000 during the first quarter of 2018, according to a report filed Sunday with the Federal Election Commission.

Of the money spent, 88 percent went to fundraising contractors, and most of the rest went to overhead and salaries, including Hampton’s own. None of the money was spent on veterans advocacy.

Put Vets First! Political Action Committee’s $10,000 in political contributions this year easily eclipsed its giving for 2017, when it didn’t contribute a dollar to political committees, including those of the many congressional candidates who advocate for military veterans.

Hampton said in an email this week his staff conducts a rigorous evaluation of hundreds of campaigns to pick the handful they want to support — but “the important part of what we do is not the money.”

When a campaign is raising millions of dollars, a $1,000 contribution from his PAC “is important, but largely symbolic,” Hampton said. “What (politicians) really covet are the endorsements we send out.”

Hampton said contracting with professional fundraisers frees up his time to focus on outreach and education.

“If Put Vets First! PAC was backed and supported by big money interests,” Hampton said, “we could raise money in far larger amounts with a far lower cost for fundraising.”