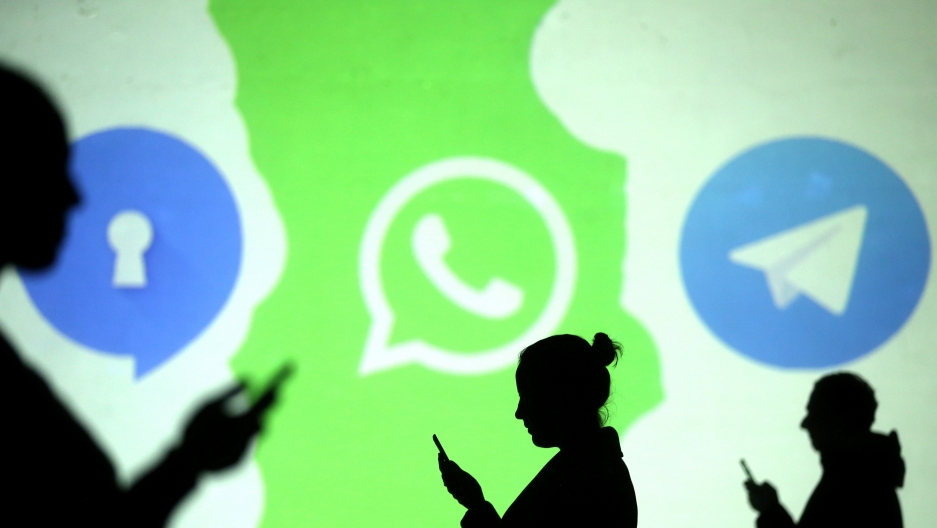 Silhouettes of mobile users are seen next to logos of social media apps Signal, Whatsapp and Telegram projected on a screen in this picture illustration taken March 28, 2018.

This week, Russian officials began implementing a planned ban on the popular messaging platform Telegram after the company refused to hand over access to its users’ encrypted messages. But it appears the implementation of the ban is not going as smoothly as Russian authorities had hoped.

Media regulator Roskomnadzor (the Russian equivalent to the Federal Communications Commission in the US) began implementing the ban on Monday. A court in Moscow cleared the way for the ban last week, ruling that the company’s founder failed to comply with legislation that required the company to hand over users’ encrypted messages to Russia’s Federal Security Service (FSB).

Writing on his Telegram channel on Tuesday, Telegram founder and CEO Pavel Durov downplayed the impact of the ban and pledged to create workarounds for users who want to continue accessing the platform.

“Despite the ban, we haven’t seen a significant drop in user engagement so far,” Durov wrote, adding that Russians are bypassing restrictions through the use of virtual private networks and proxy servers.

Durov added that his company has moved some of its infrastructure to third-party cloud servers “to remain partly available for our users [in Russia].” That appears to be why millions of IP addresses belonging to Amazon Web Services and Google Cloud were blocked on Tuesday. Services linked to Microsoft were also taken down, according to the Moscow Times.

The companies did not respond to a request for comment on whether they plan to continue hosting Telegram.

Retailers, online games and other web-based services, including the messaging app Viber, also saw their services affected because of the broadly enforced crackdown, according to the BBC.

As part of the effort to ban Telegram, Russian officials have also asked Google and Apple to remove Telegram from their app stores, Reuters reports.

PRI reached out to both companies for comment on how they plan to respond to the reported request, but did not receive a timely response.

In his statement Tuesday, Durov praised those and other US-based tech companies for “not taking part in political censorship.”

Threats to block Telegram unless it gives up private data of its users won't bear fruit. Telegram will stand for freedom and privacy.

Russian authorities say they need access to the messaging data of those who use online services, including Telegram, for counterterrorism purposes. (In 2016, Russia passed a package of anti-terrorism measures — the so-called Yarovaya law — that effectively granted Russia’s security services the right to demand access to encrypted services.)

For his part, the 33-year-old Durov has long held that complete user privacy is a priority. "I think that privacy, ultimately, and our right for privacy is more important than our fear of bad things happening, like terrorism,” Durov said back in 2015, when questioned about how the terrorist group ISIS was using the platform, and what he saw as his responsibility to act. “Ultimately ISIS will always find the way to communicate within themselves. And if communication ends up being not secure for them, they’ll switch to another [app] ... I think we’re … doing the right thing — protecting our users’ privacy.”

On Tuesday this week, Durov stood firmly by that sentiment, writing in his statement, “We promised our users 100% privacy and would rather cease to exist than violate this promise.”

Internet rights activists in Russia and beyond have praised Durov’s firm and consistent stance on user privacy. The CEO even got a shoutout Tuesday from NSA contractor-turned-whistleblower Edward Snowden on Twitter.

I have criticized @telegram's security model in the past, but @Durov's response to the Russian government's totalitarian demand for backdoor access to private communications—refusal and resistance—is the only moral response, and shows real leadership. https://t.co/KtZDpu33wh

The Russian government’s move to block the platform appeared to be — at least initially — largely unsuccessful, with users reporting on Tuesday they were still able to use the app, a full 24 hours into the ban’s announced implementation. Still, some say enforcing the ban sets a new precedent for online censorship in Russia.

The #Russia-#Telegram clash threatens to change the rules & create a new kind of censorship: until now the regulator pretended it was blocking information banned in Russia, while users pretended they couldn't access it, says a @novaya_gazeta opinion piece https://t.co/scnwqtTc0y

Others in the country worry the move sends a negative signal to homegrown tech and other talent in Russia.

“Durov was an inspiration for me personally and for my generation,” says Andrey Mima, the founder of a St. Petersburg startup and a former employee of VKontakte, another company Durov founded. “We are sad about our future and … being in St. Petersburg and understanding that we cannot do big things and create some influential web service or some tool that won’t be, in some way, suppressed by the government.”

Durov, a Russian native who lives in self-imposed exile abroad, is widely admired by Russia’s youth and those in the country’s tech scene.

Before founding Telegram in 2013, Durov launched Vkontakte (or VK) a social media website often likened to the Facebook of Russia. Durov left the wildly successful platform and fled the country following clashes with Russian authorities. The company is now under the control of one of Russian President Vladimir Putin’s allies.

Telegram representatives have previously said they would appeal a ruling immediately blocking the platform in Russia.

According to figures released last month, Telegram currently has 14 million users in Russia — making up about 7 percent of nearly 200 users worldwide.