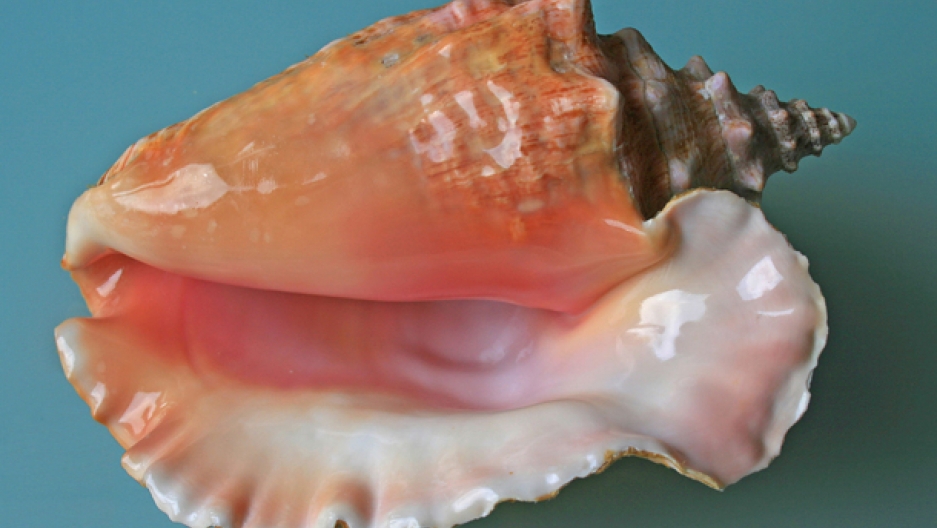 The Queen Conch is a large marine mollusk found throughout the Caribbean.

The queen conch is a large marine mollusk with a beautiful shell that is prized for export. The gastropod inside the shell is featured on menus across the Caribbean. But the conch’s numbers are rapidly dwindling, and researchers say action is needed to save them.

In Key West, Florida, known locally as the capital of the Conch Republic, the locals eat conches in a multitude of forms: cracked conch, conch chowder, conch fritters, conch salad, conch and rice. People come out in droves to compete in the annual Conch Honk. As beloved as it is, however, the conch fishery in the Florida Keys has actually been closed since 1975. So, all of the conch enjoyed in the Conch Republic has to be imported, mostly from the Bahamas.

In the Bahamas, the mollusk is also a critical component of the local diet and the culture, with conch festivals and a conch homecoming each year. The conch even sits at the top of the Bahamian coat of arms. So, for some islanders, it’s simply hard to believe that conches are endangered.

Half a million pounds of conch per year are exported from the Bahamas and more are consumed locally. To keep up with demand, methods for harvesting them have become more sophisticated. Historically, fishermen would free dive with a mask and snorkel to scoop them out of the sea grass. But now, fishermen use surface-supplied air equipment called a hookah, which allows them to stay underwater longer — and harvest many more conches.

Increased time underwater leads to overfishing, says Alan Stoner, chief scientist for the conservation organization, Community Conch. He has been conducting surveys of conch populations in the Bahamas for more than 20 years. “By 2016, the density of conch was down to only 10 percent of the original density in very shallow water,” he reports.

Adding to the problem, there’s no closed season for conches in the Bahamas, and some conches are legally harvested before they reach sexual maturity, so they never have a chance to reproduce. That’s bad news for people who like to eat conch fritters. It's worse for marine species that depend on the mollusk for food.

“There are a whole host of predators that require conch as at least part of their diet,” Stoner says. “That would go right up to sea turtles and things like octopus, which take a very large number of conch.”

The Bahamas has a network of Marine Protected Areas where conches are safe from human harvest. But even there, researchers are finding far fewer than they did just a decade or two ago. Stoner says the population density is just not high enough for the animals to reproduce.

“We need about 50 conch per hectare. A hectare is about the size of a soccer field,” he says. “If you don’t have 50 mature adults in that space, the males and the females can’t find one another.” Right now, that number is closer to 20 conches per hectare in most areas.

Stoner says researchers in the Florida Keys tried to relocate conches to a protected area in order to reach that threshold of 50 adults, but they had mixed results. “That works on a fairly small scale, but, obviously, [to make up] for the millions of conches that are harvested every year, we need a large number of eggs being produced, and [we] haven’t found a good way to do that yet,” Stoner explains.

There are ways to preserve remaining conches, Stoner adds: Increase the legal size they need to be for harvest; go back to free-diving to collect them; and end exports. That last one is a tough sell in a country where conch exports are a multi-million dollar industry.

The government has been slow to take action on conservation. But Stoner believes that if locals act now, they could still save the species before all the conches are truly gone.