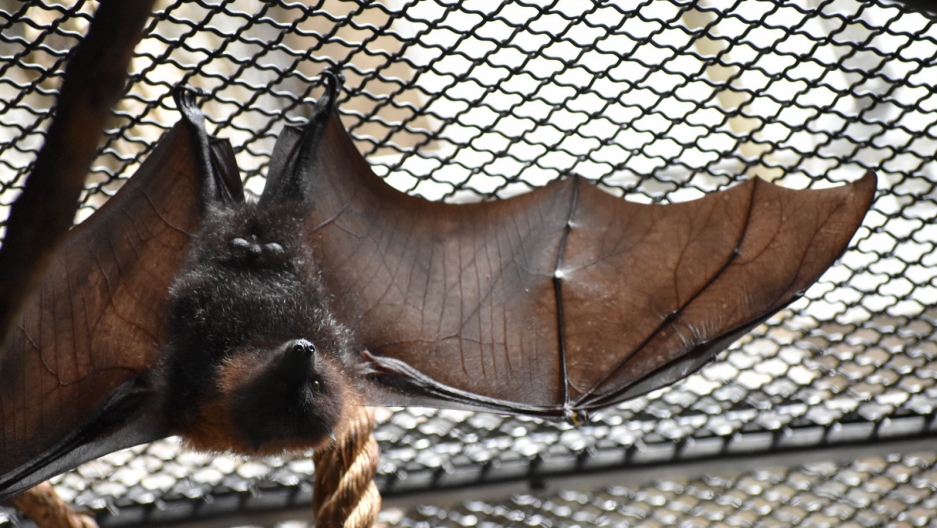 Bats have a specialized type of thin skin that allows its wings to change whether a muscle is activated with every beat cycle of the wings.

They are associated with dark caves, bloodthirsty vampires and one of the most famous superheroes of all time. But for all we know about bats, a lot is unknown to the general public — from how they fly and land to how they find objects in front of them.

The creatures, which are the subject of the latest episode of The Macroscope from “Science Friday,” are an area of fascination for Sharon Swartz, a professor of biology and engineering at Brown University. She specializes in the study of bat flight and the structure of their wings. Swartz wants to make one thing clear: Bats do not fly or land like birds.

"When I started into this field some very large number of years ago now, people told me that bird flight, bat flight [are] basically the same thing, just a little minor variation on a theme. But it's not really true,” Swartz says. “And the more we understand about bat flight, the more we understand how different these two ways of getting around the skies really are.”

To land, bats have to slow down and essentially flick themselves upwards so they can land upside-down. “It’s like doing a high dive backwards,” says Kenny Breuer, a colleague and collaborator of Swartz’s at Brown who also serves as a professor of biology and engineering.

Swartz says when bats have a wing in the air, the amount of that wing's lift coincides with how fast it’s going.

“So as the animal slows down, it generates less lift, and if you want to land on the ground that's a good thing. You slow down. You move downward [and if] you're a bird you're all set," she says. "But bats don't land on the ground, so as they slow down they need to move upward, and that really is a problem when it comes to physics.”

As a bat approaches the site where it wants to land, it uses its large wings — which are very heavy for a flying animal — to slow down and keep any lift from generating in their wings, Swartz says.

This precision, which is documented on the video in slow motion, is a result of a musculoskeletal system that is similar to that of humans', but finely tuned through evolution to adapt to the ecological environment associated with flight, Swartz says.

Furthermore, the wing itself features many distinctive structures such as specialized thin skin.

“If we look at the tissue itself, it doesn't look very different. But unlike our limb muscles, those muscles don't attach to bones. They only attach within the skin itself,” Swartz says. "The muscles within the skin give the bat the capacity to really control the skin in a way that we don't normally see in skin. So the bat has a system for actively changing how stiff the wing membrane can be. So during flight the bat can turn those muscles on and off with every wing beat cycle.”

Cynthia Moss is a professor of psychological and brain sciences and neuroscience at Johns Hopkins University. She says most researchers who study bats believe they originated from an ancestor that glides.

"Gliding seems to be a form of specialized movement that evolves very easily within mammals — if there's any such thing as something evolving easily," she says.

She adds that gliding wings evolved independently at least eight times in mammalian evolution, including a couple times in rodents and three times in marsupials. One of bats' closest relatives, Moss says, is an animal found in the Indo-Pacific called a flying lemur (even though it does not fly and is not actually a lemur).

Moss' research team recently released its findings on the neuroscience of bat echolocation. Bats have a very high frequency of hearing, which is needed to produce very high-frequency sounds, she says. Some species of bats use a frequency that can exceed 200 kilohertz. For comparison, humans can only hear up to 20 kilohertz in the most ideal conditions.

“There appear to be some special circuits in the bat brain that help process the information to build pictures, if you will, of objects in the world through sound,” Moss says.

To navigate the world around them, bats’ brains are constantly processing information at a high rate. From one echo to the next, their environments change, which require rapid processing since so many variables are changing as they fly.

How fast do they process? There have been experiments to measure time delays between when a bat calls, or emits a sound, and when it echoes as it determines the measurement of distance ahead, Moss says.

“There's about six milliseconds of echo delay for each meter of object distance,” she says. “Experiments have been conducted to test the bat's ability to discriminate small differences in distance, and they can discriminate in the microsecond range — really astonishing.”

Not all echolocation sounds are the same. The sounds vary within species of bats — which number more than 1,000 different types. Furthermore, there still other bats who resort to other sounds for the same purposes, such those with more of a tonal quality and clicks made by their tongues, Moss says.

“These very high-frequency sounds are really well designed to bounce off of small objects like little mosquitoes,” she says.

This article is based on interview on PRI’s Science Friday with Ira Flatow.