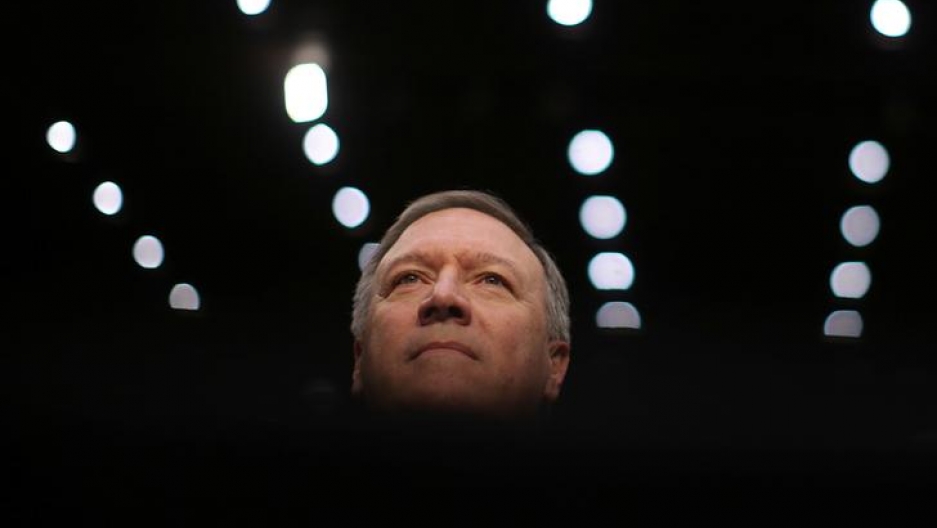 Then Rep. Mike Pompeo testified before a Senate Intelligence hearing on his nomination of to be become director of the CIA on Jan. 12, 2017. On Apr. 12, 2018, he'll testify to be confirmed as Secretary of State.

In a presidential administration where nominees for Cabinet positions are announced via Twitter, Mike Pompeo, President Donald Trump’s new pick for secretary of state, must still clear a key hurdle before he can take the job.

In recent weeks, it’s become clear that Pompeo, the current CIA director, will face an uphill battle to muster enough votes from the closely divided Senate Foreign Relations committee to confirm his new position. If he can’t, his nomination could go to the Senate floor for an unprecedented — and just as uncertain — Senate-wide vote.

At his confirmation hearing Thursday, Pompeo, who has a reputation for hawkishness, will likely face questions from the foreign relations committee on the substance of his own foreign policy views, as well as the US strategy on major foreign affairs issues.

Five former and retired State Department officials tell PRI they will be looking for clarity on Trump’s controversial foreign-policy decisions, including how the US might retaliate against Syria over alleged chemical attacks last weekend. They will also want to know if the US will pull out of the Iran nuclear deal, how Pompeo and Trump will handle deteriorating relations with Russia and more about the planned summit with North Korean leader Kim Jong-un on denuclearization of the Korean Peninsula.

They’ll also be looking for signs that Pompeo might revive an embattled State Department. Rex Tillerson, whom Trump fired as secretary via Twitter last month, attempted an unpopular “redesign” of the department that left numerous vacancies unfilled due to a hiring freeze and mass staff departures. Since Trump took office in January 2017, the Foreign Service Officer corps has lost 60 percent of its career ambassadors, according to the American Foreign Service Association. Meanwhile, Trump often seemed to make foreign policy decisions on the fly, without the department’s input or Tillerson’s knowledge.

“Diplomats were relegated to the kids’ table when it came to deciding critical foreign policy issues,” says Brett Bruen, a former State Department official posted overseas who now heads the Global Situation Room, a consulting firm. “So Pompeo has to show that he’ll get the State Department back in the room and back at the big kids’ table, especially when it comes to the Iran nuclear deal and summit with Kim Jong-un.”

Pompeo, a former businessman and conservative Republican congressman from Kansas, faces a tough crowd Thursday. Republicans hold a one-seat majority on the 21-member foreign relations committee. But several members have expressed reservations about Trump’s nomination. At least one Republican on the committee, Sen. Rand Paul of Kentucky, said last month that he would vote against Pompeo because of Pompeo’s support for the Iraq war, waterboarding and other enhanced interrogation techniques.

If the committee does not approve Pompeo’s nomination, Senate majority leader Mitch McConnell might bring it to a floor vote. Paul has said he might filibuster the nomination, raising the stakes that it might not clear the closely divided Senate.

That level of opposition is rare for the nomination of chief diplomat, says Jordan Tama, associate professor of international relations at American University and a research fellow at the school’s Center for Congressional and Presidential Studies.

“Even in recent years, where foreign policy debates have become more polarized, there’s been strong bipartisan support for secretaries of state,” Tama says. “In the Obama Administration, there was support for Hillary Clinton and John Kerry. And Tillerson was relatively easily confirmed. There are more objections this time around.”

In January 2017, Pompeo was confirmed as CIA director 66-32, with 14 Democrats voting for him. But it’s unlikely they’ll all vote for him again as secretary of state, especially after Trump’s turbulent first year in office has damaged foreign relations around the world, Tama says.

“There are concerns that Trump is a rash decision-maker, that he could get us into a military conflict with North Korea, for instance,” he says. “There’s concern about having a secretary of state who is a hawk, especially after Trump replaced H.R. McMaster with John Bolton as national security adviser. That general context makes Pompeo’s nomination particularly concerning to some people.”

Bolton, like Pompeo, has a significantly more hawkish reputation than his predecessor. Where McMaster advised caution, Bolton advocates for force. For example, Bolton has said the US should declare war on both North Korea and Iran.

Human rights groups are worried, too. The Leadership Conference on Civil and Human Rights, a coalition of 200 groups, has been rallying outside the US Capitol this week to oppose Pompeo’s nomination. In an open letter to Senators, they cite Pompeo’s anti-Muslim comments, support for mass surveillance programs and support for policies barring LGBTQ people from military service — all which, they write, “raises serious doubts about his ability to represent all in America and promote human rights for all individuals abroad.”

There are signs Pompeo is gearing up to please all sides. Reports say that he is calling former secretaries for advice. Pompeo rose to political prominence for his tough grilling of Clinton over her handling of the 2012 attacks in Benghazi, Libya.

“I hope he does send some positive messages to a very demoralized workforce at the State Department,” says Wendy Chamberlin, president of the Washington, DC-based Middle East Institute and a 29-year veteran of the foreign service, including a stint as US Ambassador to Pakistan. “People are really hopeful that he’ll come in as a manager of both diplomacy and the department. They’re led to this view because has a pretty good record at the CIA as a conscientious manager. There are open arms at the State Department for Pompeo.”

Chamberlin also says she will also be listening for clues on how Trump will handle a recent promise to attack Syria — which came days after saying he’d like the US to withdraw from the country. In a statement Sunday, the Foreign Relations Committee’s top Democrat, Sen. Bob Menendez, said, “During his upcoming hearing, I expect Secretary of State-nominee Pompeo to articulate an actual policy for Syria.”

“One of the serious weaknesses of our foreign policy toward Syria is that we’ve acted tactically but without strategy,” she says.

Chamberlin was one of more than 200 former US ambassadors and diplomats who sent the Senate Foreign Relations Committee a letter last month, asking its leaders to let Pompeo’s nomination “focus public attention on the urgent need to restore the power and influence of American diplomacy.” The letter was organized by Foreign Policy for America, a nonprofit organization that advocates for engaging with the world and has been tracking vacancies at the State Department.

Another signee was John Feeley, a career Foreign Service officer in Latin America who retired last month from his post as US Ambassador to Panama out of frustration with Trump. Feeley was among the State Department’s 20 most senior officers.

“I found myself saying, ‘I think the President’s words speak for themselves,’ and by words I mean tweets,” Feeley says about his conversations with his Latin American counterparts. “I had no instructions. The foreign service is a disciplined corps. And it’s not just the negative tone and tenor of this administration — it’s the ineptitude, the lack of coordination between the president and whoever is working for him in the White House and ambassadors overseas. You lose credibility with your interlocutors.”

Feeley says he hopes Pompeo will show that he can support those who work in the State Department: “I hope he is clear in his support for a cadre of apolitical diplomats that serve the president’s foreign policy.”

He also says he hopes Pompeo — who has a good relationship with Trump — will use his proximity to the White House to coax the president to pay more attention to Latin America as an ally and economic partner, not just the home region of immigrants.

If confirmed, Pompeo’s first task will be to prepare for the North Korea summit, which Trump has said will likely to take place in late May or early June.

“The first thing they should ask him Thursday is, ‘Do you believe North Korea’s idea of denuclearization is identical to that of the US?’” says Evans Revere, a former US senior diplomat who negotiated with North Korea during the George W. Bush and Bill Clinton administrations. “That’s a fundamental question, in our experience talking to the North Koreans. It’s not the sort of thing Pompeo will say much about in a public setting.”