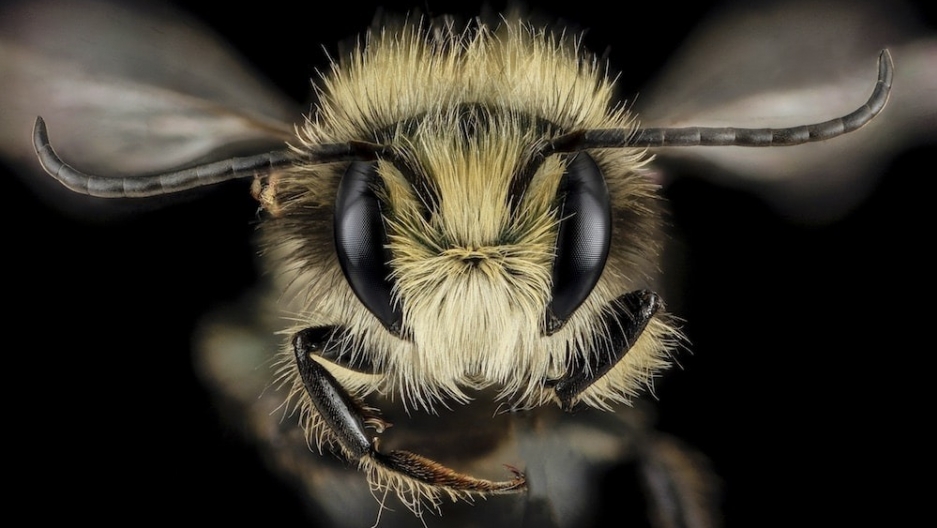 A close-up view of a male blue orchard bee, also known as Osmia lignaria. This type of bee, which is native to North America, is known to be one of the world's best pollinators.

Image courtesy of Paige Embry © 2018 Published by Timber Press, Portland, Oregon. Used by permission of the publisher. All rights reserved.

When it comes to bees, honeybees get all the attention. But as a new book will tell you, honeybees are just one fraction of the many types of bees buzzing outside the collective consciousness of most Americans.

The book is “Our Native Bees: North America’s Endangered Pollinators and the Fight to Save Them.” The Seattle-based author, Paige Embry, began her quest to discover some of the approximately 4,000 species of bees that call the continent home after learning five years ago that bumblebees (and not honeybees) were needed to pollinate tomatoes, given their specific skill of shaking the pollen out of the fruit.

“I was flabbergasted that I hadn't learned it” earlier, Embry says. “I felt sort of dim, in fact. But then I went and started asking other people, and none of them knew that honeybees couldn't pollinate tomatoes, but that there were some native bees that could."

As she gathered the information that would become the foundation of the book, Embry says her eyes opened to all of the bees native to North America. Honeybees came by way of Europe.

Not all bees are yellow-and-black honey producers that live in hives. Some are blue. Some are smaller than a grain of rice. Some have colorful, iridescent exoskeletons. Some live in snail shells, cow manure and rose stems. In fact, a majority of bees live in the ground in places like old beetle burrows, not the traditional hives that we tend to envision.

“I absolutely think that the other bees deserve more press,” Embry says. “A lot of them do a lot of pollination services for crops that they probably aren't getting recognized for. And then there's all the other plants out there that they're busy pollinating, and nobody even notices them … They’re really diverse group of animals, and we've sort of shoehorned them into this word that we call a bee.”

The book talks about one of North America's top pollinators: blue orchard bees.

“A hive box of honeybees has maybe 10,000 worker bees who go out and do the pollinating on an acre of almonds,” Embry says. “For example, you put two of those hive boxes, but you can replace one of them with just 400 female blue orchard bees. So they are much more efficient pollinators.”

The problem with blue orchard bees is figuring out how to manage them. Embry says out of approximately 20,000 species found around the world, only about a dozen can be managed.

“The hard part is how do you raise enough of them? So people have been working on that,” she says.

One type of bee Embry describes in her book is called cleptoparasites (you can read an excerpt about them here). Mother cleptoparasite bees — instead of gathering pollen and nectar for their babies — go into holes of other bees' nests and lay their eggs inside.

Says Embry, “So I asked the guy who's been studying these bees: ‘Well, how come the mother bee who was making the nest doesn't know and do something about it?’ And he said, ‘Well, it's dark in there, and they don't have a flashlight.’”

Susannah Lerman serves as a research ecologist with the United States Department of Agriculture Forest Service based out of Amherst, Massachusetts. Lerman was originally trained as an ornithologist, primarily studying studied birds for the past 20 years. Since 2013, she's also been studying bees. Lerman was recently part of a research team that conducted studies to see if native bees would be attracted to the largest green areas in most suburbs: lawns. By her estimation, there are approximately 65,000 square miles of lawns in the US, an area slightly smaller than the size of Florida.

It is understood that bees love areas such as community gardens and flower beds, but she wanted to see how they would respond to traditional grass lawns — by seeing how many bees that would visit an area based on how often it was mowed.

“A lot of my colleagues have really dismissed lawns as non-habitats, because you look at a lawn and it's just grass,” Lerman says. “It's very low, there's no structure to it, but I kept thinking, ‘Well, there's so much lawn available. How do we make these lawns less bad?’ and so [we were] really trying to figure out, are there ways that we can manage these lawns so that they can provide bee habitat?”

Lerman’s team found the “sweet spot” to attract native bees appeared to be lawns that were mowed every other week. They called this the “lazy lawnmower approach,” given the native bees’ attraction to plants such as dandelions, clover, yellow wood sorrel and horseweed that tend to grow on less well-kept lawns.

“I think some people might consider these weeds, but they actually seem to be providing some nectar and pollen sources for bees,” Lerman says. "I think for a lot of people who want to do something good [for bees] but don't have the time, this might resonate for them.”

Lerman’s team studied 16 suburban lawns near Springfield, Massachusetts. On those lawns alone, they found more than 110 different species of bees using the grounds.

“When you go out in your yard and you really start looking, you'll see them, and it's like they've been there all along,” Embry says. “And they're there and it's so fun when you plant a specific plant, thinking this is going to be good for bees and you go out and they've come. It's like the easiest conservation ever.”

Editor's note: An earlier version of this story incorrectly stated the number of bees Lerman's team found in Springfield, Massachusetts (it is 111, not 1,110), as well as how long Lerman has studied bees. She has studied bees since 2013.