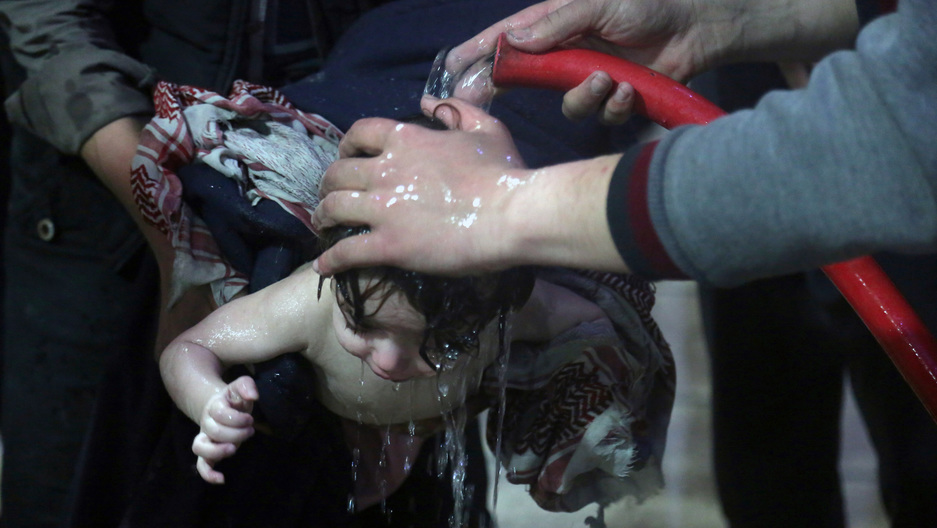 A child is treated in a hospital in Douma, eastern Ghouta in Syria, after what a Syria medical relief group claims was a suspected chemical attack on April 7, 2018.

As evening approached Saturday, the rebel-held Syrian town of Douma had been under shellfire for three days in a row.

The Syrian government was in the final stages of a large-scale operation to recapture the suburb of eastern Ghouta, on the edge of Damascus. Douma was the last holdout.

Dozens in the town were reported killed by government airstrikes, conventional weapons that elicited little response from the international community.

Then, after dusk fell, a different kind of bombardment began. A barrage of shells crashed down on the streets, and soon after, video footage posted by activists (warning: graphic video) emerged showing victims of an apparent chemical attack.

Many of the victims were foaming at the mouth. Other images showed what appeared to be entire families lying motionless in the basements of their homes where they tried to hide. Children were among the dead.

“We received more than 70 patients,” said Mohammed Samer, a medical student who treated victims of the attack in a hospital in Douma. “We tried to save them, but a lot of them couldn’t be treated because [rescue workers] couldn’t reach them. They died in their homes.”

Samer said staff at the hospital where he worked were overwhelmed by the number of casualties, which showed clear signs of a chemical attack.

Rescue workers and doctors said more than 42 people were killed in the chemical attack, but that there were likely many more victims yet to be found. The Syrian Civil Defense said 500 people were treated in medical centers.

The attack came almost a year to the day after deadly sarin gas was dropped on Khan Sheikhoun, in the northern Syrian province of Idlib. Images of dead children from that attack, which killed more than 80 people, were said to have been a factor in Trump’s decision to order cruise missile strikes at the Syrian government air base from where the attack was launched.

On Sunday, Trump hinted that a similar US military response be forthcoming, writing in a tweet that there would be a “big price" to pay for the attack.

Many dead, including women and children, in mindless CHEMICAL attack in Syria. Area of atrocity is in lockdown and encircled by Syrian Army, making it completely inaccessible to outside world. President Putin, Russia and Iran are responsible for backing Animal Assad. Big price...

The president was quick to point the finger at the Syrian government this time, too, saying that “President Putin, Russia and Iran are responsible for backing Animal Assad,” or Bashar al-Assad, Syria's president.

Syria’s state news agency denied responsibility and accused rebels of fabricating the attack. Syria has responded in a similar manner to previous attacks, even when there is evidence of its culpability.

Chemical weapons have remained a well-used part of the Syrian government’s arsenal even after the US strike against Assad to deter their last year.

Human Rights Watch has documented the use of chemical weapons by government forces dozens of times since the attack in Khan Sheikhoun.

“In Syria, the government is using chemical weapons that are banned the world over without paying any price,” said Lama Fakih, deputy Middle East director at Human Rights Watch, in a report released just days ago. “One year after the horrific sarin attack on Khan Sheikhoun, neither the UN Security Council nor the Organisation for the Prohibition of Chemical Weapons has acted to uphold the prohibition against chemical weapon attacks.”

The Syrian government has been eager to wrap up “Operation Damascus Steel” — the name given to the operation to recapture eastern Ghouta — and stop rebel rockets hitting the capital.

Over the past week, Russia, which is Assad’s main backer, has been trying to broker a deal with Jaish al-Islam, the rebel group in control of Douma, to evacuate its fighters and their families to Idlib — something that has happened in other areas of Syria where rebels have been defeated.

With negotiations dragging on, the Syrian government may have decided that it was time to force the issue.

Russia said that 100 buses had arrived in the town to help start ferrying out some 8,000 fighters their family members. Some have already started to leave. 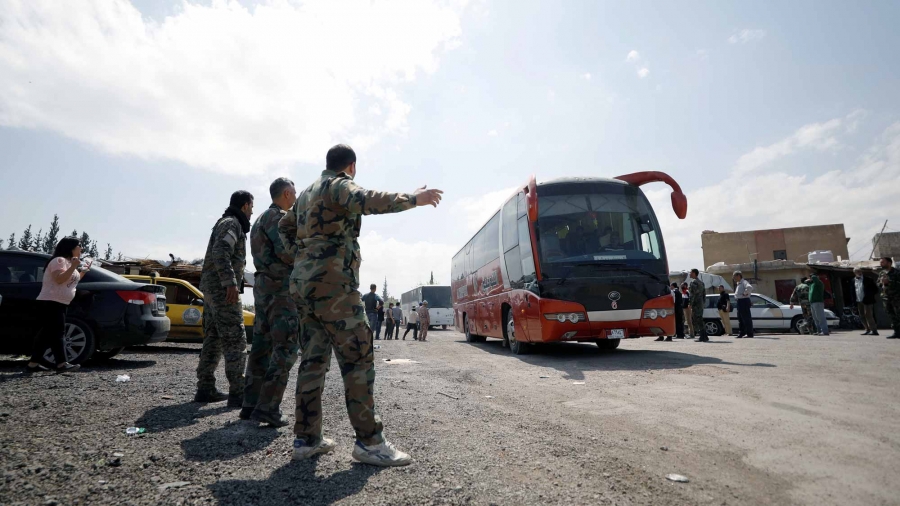 Buses carry rebels and their families who are leaving Douma. More than 100 buses will be lined up waiting to evacuate 8,000-some fighters and their families to the Idlib countryside in the wake of what activist groups are saying was a chemical gas attack.

As Damascus braced for a potential US response on Monday, it briefly appeared that it had come swiftly. A Syrian government air base near Homs, which is said to be home Iranian fighters allied with Assad, was struck by missiles. But the Pentagon denied US involvement. The Russian military later said two Israeli F-15 jets carried out the strike.

Israel has not commented on the strike, but it has repeatedly hit targets within Syria linked to Iran and the Lebanese group Hezbollah — both of whom are fighting on the side of the Syrian government and whose growing influence in the country Israel has vowed to counter.

Israel may not be the only power to strike Syria this week, as the conflict increasingly becomes less a fight between rebels and the government and resembles more a battlefield for the interests of various regional powers.

On the surface, it may appear that this latest attack threatens to draw Trump deeper into the Syrian conflict as he has become more open about wanting to withdraw further from it.

Just last week, Trump said of US involvement in the country: “I want to get out. I want to bring our troops home.” His desire to withdraw 2,000 US troops — who are there ostensibly to ensure the defeat of the Islamic State — is opposed by the Joint Chiefs of Staff, the Pentagon, the State Department and the intelligence community.

But even if Trump does decide to act on this latest atrocity, analysts say his options are limited, and the horrific images out of Douma are unlikely to change the direction of US policy.

“I think this menu [of options] is hard,” Aaron David Miller, a former State Department analyst and negotiator in both Democratic and Republican administrations, told PRI, “in large part because whatever means are ultimately used to respond to this particular attack will not answer the broader question of what to do about the Syrian problem more generally.”

Still, Miller said that a military strike that goes beyond the limited response in April 2017 may be on the table this time.

With the exception of last year’s strike against Assad, Trump has largely stuck to the same script as former President Barack Obama, namely focusing on the defeat of ISIS. Trump may hit Assad again in response to the Douma attack, but he is unlikely to go further and push for regime change.

“Both Trump and Obama have judged that however tragic the humanitarian problem and the hemorrhaging of terrorists and refugees outside of Syria, it is not a vital US national interest worth the expenditure of troops, money and credibility that assuming a lead US role in Syria would involve,” he said.

The Trump administration now seems set to walk a thin line between delivering a strong response to this latest atrocity and avoiding a retaliation that would embroil US forces further.

For the civilians of Douma, symbolic strikes against Assad are likely to provide little comfort. Many were now faced with the prospect of leaving the homes where they have lived their whole lives.

“I’m leaving the city I grew up in,” said Mahmoud Bwedany, a 20-year-old activist from Douma. “And I’m afraid I won’t be able to come back.”

Bwedany plans to leave on one of the 100 buses lined up in Douma tomorrow, which will head to countryside of Idlib. He fears he will be arrested if he stays.

“The regime is marking everyone as a terrorist. Even those people who participated in peaceful acts, since they went up against the regime, they count them as outlaws.”