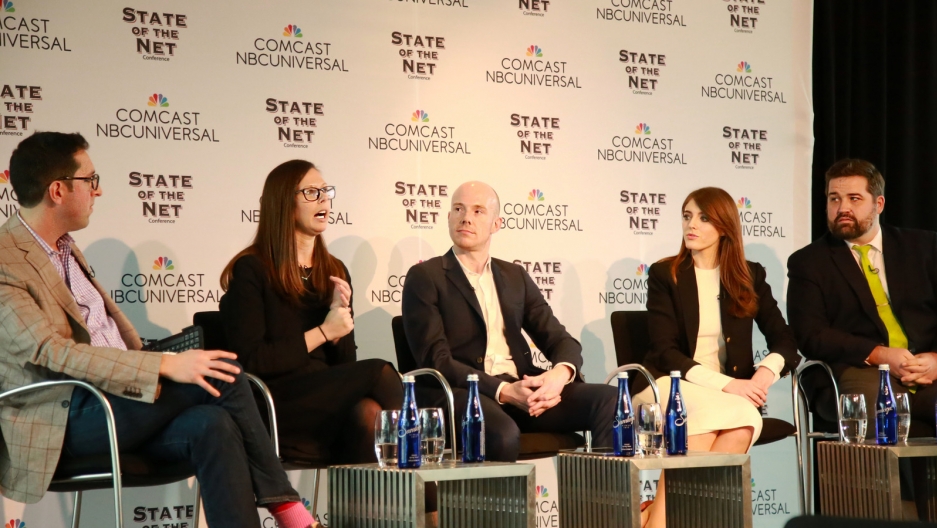 A group of panelists addresses an audience at the State of the Net Conference in January. The panel consists of (from left to right) Jason Kaplan, Hilary Swab Gawrilow, James Cross, Mercina Tillmann-Dick and Justin Herman. As the chief operating officer of the Global Blockchain Business Council, Tillmann-Dick is in a small number of women in the blockchain space — but others hope that more women will be able to enter the field to help lessen the current gender disparity.

Blockchain. At the most recent South by Southwest Conference earlier this month, it was one of the top buzzwords floating around the various pockets of conversation. A large majority of the people talking about it there, though, were men.

Even though the blockchain movement has the potential to have innumerable effects on our everyday lives, one estimate puts this new tech space at being currently 95 percent filled by men — but there are growing initiatives to bring more women into the fold.

Kerry Flynn, who is a business tech reporter for Mashable, covered South by Southwest. Although a majority of people associate blockchain with cryptocurrency such as Bitcoin, she says she spoke with many aspiring entrepreneurs who are looking to use the growing technology to help benefit food supply. An example could include a restaurant being able to know exactly what farm is sourcing its supply of a particular food.

“Because it’s publicly available, it’s not just the supplier and the distributor, but also people like you and me being able to verify that it’s true,” Flynn says.

Blockchain  is an open digital ledger that could record every transaction. Those transactions which would be protected from tampering, be verifiable, have a unique signature.

Nellie Bowles serves as a tech reporter for The New York Times. She calls blockchain a “publicly verifiable digital ledger.”

“It will be used for many different things,” Bowles says. “How the blockchain is used in our lives, and what it means is really yet to be seen, and that’s what’s so exciting about right now, and about covering it right now.”

By her estimation, the speaker skews at conferences she has attended has been as large as 85 men to every female speaker.

Sitting in ‘a sea of men’

Veronica Reynolds, who co-founded the UCLA Blockchain Lab in Los Angeles, remembers the first time that she went to a conference devoted to blockchain last year. She sat around the lunch table and immediately felt uncomfortable in the room because of the large gender disparity.

“Then it dawned on me: It’s because I don’t see myself mirrored. I looked around and it was a sea of men,” says Reynolds, whose lab was established last year.

Bowles wrote about a large portion of these males, a group that is now referred to as “blockchain bros,” who are mostly in the space to find ways to turn a profit.

“A lot of women were involved early on, and have felt like they are being pushed out now as the price of cryptocurrencies has gone up, and there’s been a frenzy, and the quote-unquote 'blockchain bros' have come into this space,” Bowles says. “The blockchain bro [is] someone who maybe doesn’t have extreme technical knowledge, but maybe bought Bitcoin or Ether early on, was on Reddit, was on 4Chan, was actively involved in this community but is in it for cash.”

Since that initial experience, Reynolds has made a point of reaching out to other women she would find at conferences or meet-ups, asking if that could connect as a way to break through this particular type of systemic barrier. Through channels via social media platforms such Facebook, WhatsApp, Slack and Telegram, those connections have grown between women in all sectors in the tech industry who are blazing trails in the blockchain space.

Reynolds — who calls the blockchain technology itself “morally agnostic” — sees a great parallel between the power of the #MeToo movement that began in the fall of 2017 and the possible conversations that can help guarantee that women are not left out in this new field.

Being a part of the tone in a new narrative

Bowles says the stakes are huge when it comes to being a part of this latest tech revolution — making it imperative that women have their voice heard as the technology continues to grow.

“I have covered the last start-up boom, and now this, which is really looking to be like another industry-wide boom in the same way that the internet was and the mobile web was, “ Bowles says. “The early winners in these spaces set the tone and start a cascade of effects that last for the entire generation of the space.

Bowles adds that she does not believe that delving into the blockchain realm is as complicated as the public has been lead to believe.

“I think there are people who benefit from obfuscating how it works,” she says.

She recalls a recent conversation she had with Arianna Simpson, an early stage investor in blockchain and other comparable technologies.

“How she phrased it was women are always waiting until they’re experts, or they’re waiting until they have a PhD in something. And she’s like ‘but look at these clowns around us. Look at these people just jumping in and getting rich quick on the space. You don’t need an enormous amount of expertise because no one has an enormous amount of expertise. This stuff is brand new.”

This article is based off an interview that aired on PRI’s “Science Friday” with guest host Flora Lichtman.