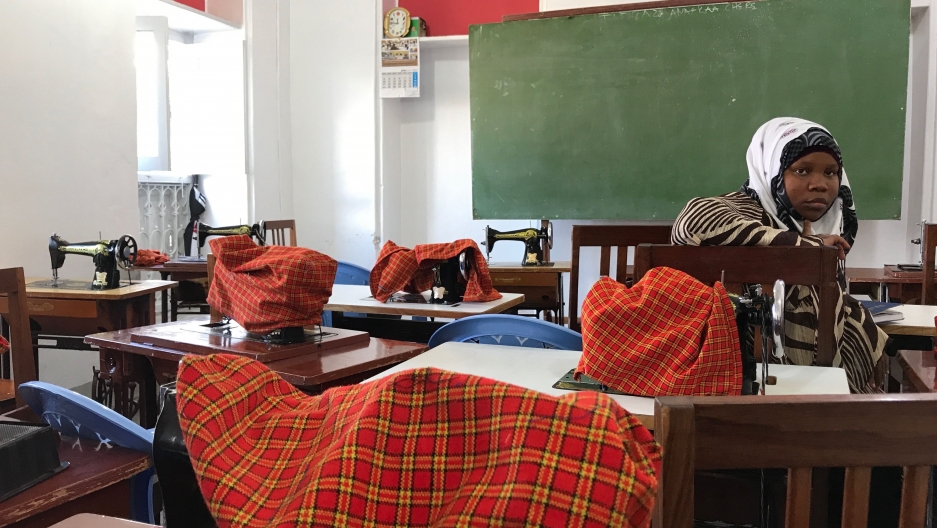 Rehema Mrisho Ame, 25, wants to be a fashion designer. Ame is among a number of young women in Zanzibar who are turning to entrepreneurship for their livelihoods.

Rehema Mrisho Ame, face alight in a bright, white hijab, sits at a sewing machine in Zanzibar’s historic center and patterns out her plans for the future. Outside, on the kaleidoscopic, congested streets of Stone Town, merchants hawk goods and tourists shop like it’s Black Friday.

She’s going to be a fashion designer, 25-year-old Ame says, and launch her own clothing company — no small feat on the semi-autonomous archipelago off the coast of Tanzania. Here, a prevailing cultural conservatism bars many women from financial independence, and an escalating youth unemployment crisis only underscores their struggle.

The crisis, caused by a widening gap between the skills taught in school and those required in the islands’ fastest-growing economic sector, tourism, has left 21.3 percent of Zanzibar's 15- to 35-year-olds jobless, according to the government’s latest data from 2014. In 2016, the World Bank reported the rate to be 10 percent higher.

Against statistics like these, Ame is among many young women who are now turning to entrepreneurship for their livelihoods. It’s not entirely out of desperation: There’s a certain passion involved, too. They want to bring their own fondnesses and flairs to the islands’ traditional industries, to create their own opportunities.

Still in training, Ame has a long way to go before she can call herself a full-fledged entrepreneur. Yet, the distance she’s come can’t be discounted, either.

Before enrolling in Upendo, the nonprofit organization that’s teaching her and other low-income women how to sew, Ame says she battled feelings of worthlessness. “My dream was to be a teacher, but I realized I was not qualified,” she says in Kiswahili. “I felt very bad about myself because I failed to meet my goals.” Now, she’s excited about a fresh start in fashion. 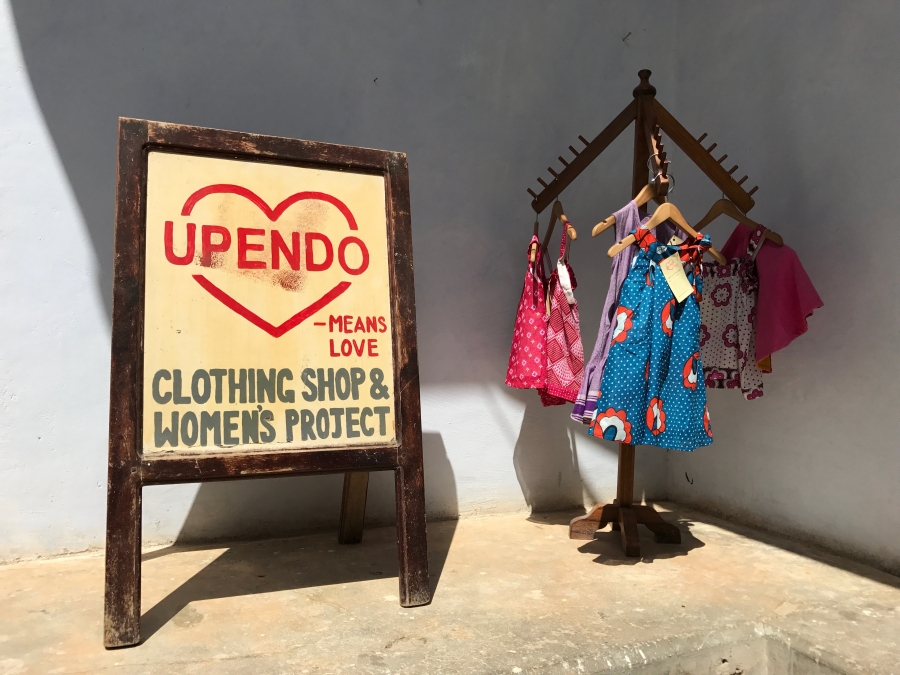 Upendo is a nonprofit organization in Zanzibar that’s teaching low-income women how to sew.

Another entrepreneur-to-be is Mtumwa Hamad Omar. The 22-year-old has her sights set on the agriculture, forestry and fishing industry — which employs more people on the islands (40.6 percent of the workforce) than any other — but she doesn’t want to farm the way her mother and father do. Omar is interested in essential oils and plans to run her own business to extract them from sustainably grown plants.

Last year, she joined the Practical Permaculture Institute, a hands-on ecological education center on the outskirts of Zanzibar City on Unguja, the largest of the Spice Islands. Here, in an outdoor classroom set against lush vegetation, she learns about organic agriculture, solar power and environmental regeneration.

Rahma Minadini Juma, 25, also calls herself a new entrepreneur. She lives on Zanzibar’s other major island, Pemba, where she hawks homemade soaps from her home and in the streets, with the goal of expanding her operation virtually.

In recent years, “entrepreneurship” has become a buzzword on Zanzibar. Touted as the key to solving the islands’ unemployment crisis, it’s a dream of many young people here, a go-to talking point of government officials, and it's emblazoned on posters and public-notice boards across the capital city.

“Youth today don’t want employment in [traditional sectors] to look like poverty. What they want are jobs that have an aspect of innovation that make them look like real economic opportunities,” says Kimberly Pfeifer, formerly based on Zanzibar with the Aga Khan Foundation, and today the co-founder of the Oxfam global research network. Those opportunities, she says, often take the shape of entrepreneurship. 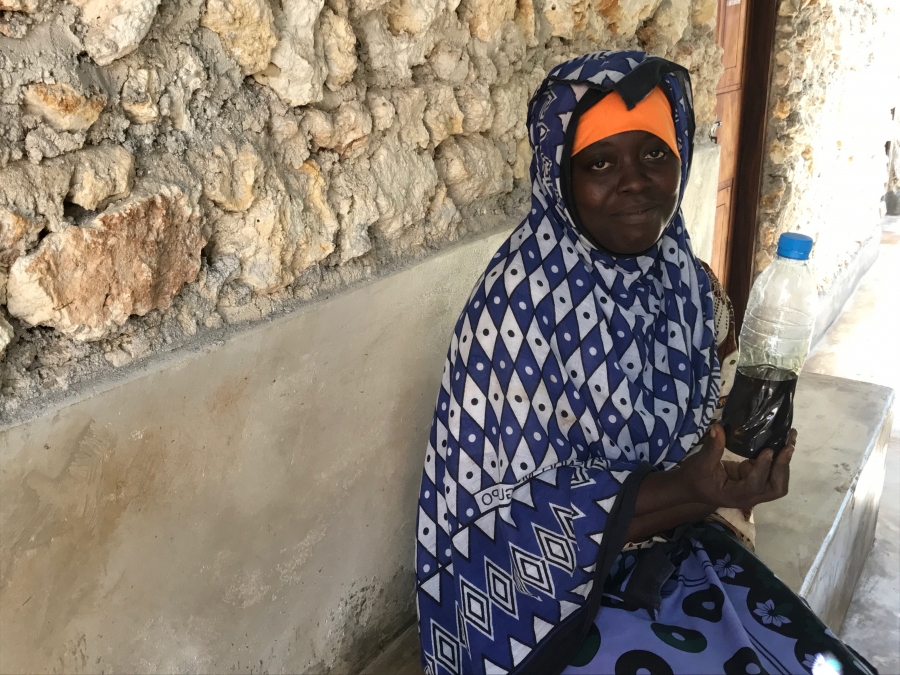 Mtumwa Hamad Omar, 22, is interested in essential oils and plans to run her own business to extract them from sustainably grown plants.

According to government statistics, the stretch between 2006 and 2014 saw an almost 18 percent rise in inactive workers’ interest in self-employment, while the preference for a wage job has fallen to 55.8 percent.

Whether the drop is due to genuine disinterest, or the pragmatism that comes with limited options, it’s hard to know for certain. But among the already self-employed, more than 47 percent of those surveyed reported their reason as being unable to find other work, while over 26 percent cited a desire to be their own boss.

Women's increasing interest in self-employment is more pronounced than men’s: 20.8 compared to 12.7 percent, respectively. It’s not difficult to understand why.

On the predominantly Muslim islands, women must overcome greater barriers to economic opportunity while wrestling with patriarchal attitudes, schooling impeded by early marriage, caretaking responsibilities and other legal, financial and institutional obstacles.

“Most women on Zanzibar don’t want to be dependent on men, but they are,” says Juma, who went on to point out the rarity of true female economic agency. Indeed, according to a Ministry of Labor report, 73 percent of women earn less than their husbands, 84 percent do not have a bank account, 89 percent do not own a house and 91 percent do not own land. Islamic law also puts women at a disadvantage when it comes to inheritance rights.

To achieve her own financial independence, Juma is working to scale her soapmaking startup, but for all of its glimmering potential, entrepreneurship is tough. She says she lacks the capital and know-how. Ame and Omar also admit that beyond the first step of getting their fashion design and permaculture training, they’re not sure what to do next.

Ministry of Labor officials say there is a wide range of initiatives available to help them. Set up by the government, nongovernmental organizations and intergovernmental organizations, these include apprenticeship partnerships, entrepreneurship forums, incubator programs and business idea competitions. “Come and be aware,” says Director of Youth Development Mwanaidi Mohammed Ali. “The government is establishing structures, [but] the government cannot be door-to-door.”

On the streets of Stone Town, merchants hawk goods and tourists shop like it’s Black Friday.

While it’s true this framework does exist, some civil society leaders say it doesn’t make its way to the islands’ most marginalized. According to Khadija Ahmed Shariff, director of programs at the Milele Foundation, that’s because there isn’t enough awareness building or outreach. Milele is a nonprofit that helps fund community-led programs, including the Practical Permaculture Institute.

Faced with the reality of Zanzibar's infrastructure, there are serious caveats to how far entrepreneurship can go in solving the unemployment problem. A majority of entrepreneurial enterprises never manage to graduate from micro to medium and don’t create jobs for anyone but the owner. Only about 5 percent of Zanzibar’s self-employed employ others.

Entrepreneurship can often just be another word for irregular, low-earning self-employment with no worker protections. And that kind of work is nothing new on Zanzibar, where nearly 74 percent of the labor force, and more than 82 percent of working women, are self-employed.

For women entrepreneurs to truly thrive, some community development leaders say, they must be supported with better orientation on labor regulations and business procedures and assisted in formalizing their ventures. According to Shariff, “The more they’re exposed to opportunities, the more that entrepreneurial shift will start to take place,” going from “just doing anything to get by” to igniting “a spark of true entrepreneurial spirit.”

Without support, many end up sitting idly at home, on the streets and in the parks, their frustration mounting. It’s not uncommon for them to be unemployed for three, four, or, in Ame’s case, five years at a time, living with their families and waiting for a change they fear will never come.

Ame has already picked herself up once, but she thinks about what other stumbling blocks will stand in her way after she finishes her training at Upendo.

At her black sewing machine, decorated with a flourish of red and yellow butterflies, she is confident. Beyond the rhythmic hum of the needle, thrust to face the islands’ most intractable problems, she’s anxious. “I want to be an entrepreneur,” she says, “but I need help.”

Ann Babe reported from Zanzibar with support from the International Women’s Media Foundation.