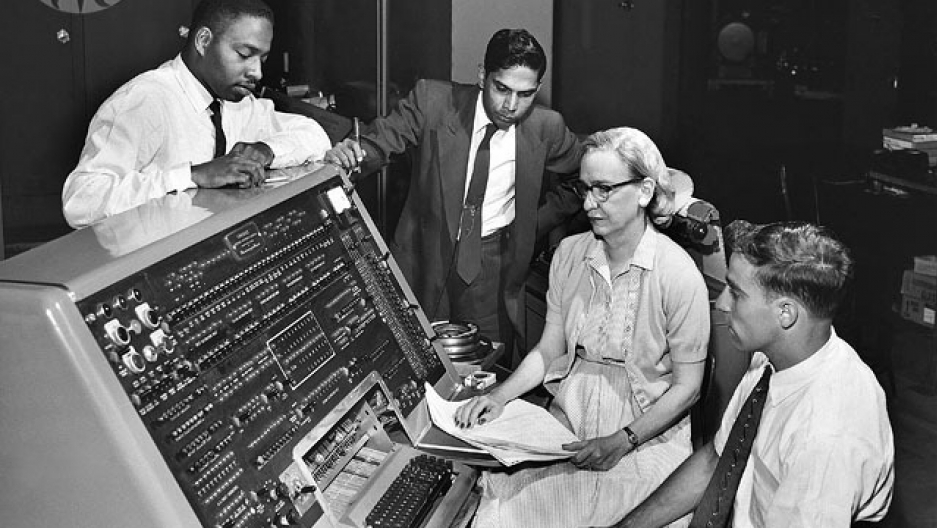 Grace Hopper sits behind the UNIVAC (universal automatic computer) keyboard in the early '60s. As a mathematician and rear admiral in the US Navy, she helped design the UNIVAC I and many other related systems.

Author Claire Evans says over the past few years her gender has made her feel slightly disconnected from the technology that has connected people since its creation: the internet.

“I had always felt that the internet was my country in some way, but I started to feel a little bit disconnected from it, unsure if — as a woman — I had a place on the internet any more. It felt more vulnerable. I felt like it was harder to express myself as freely as I had in my early days online,” says Evans, who also serves as the singer and co-songwriter of the musical group YACHT.

Her uncertainty led to research on the female pioneers who helped shape modern-day computing, software engineering and web browsing. Those stories became the inspiration for her most recent book, “Broad Band: The Untold Story of the Woman Who Made the Internet.”

“When I first started working on this book, I felt the real burden of responsibility of wanting to include every single excluded name, and I could have written an encyclopedia. There are so many stories beyond the ones that I included in the book,” Evans says.

Evans says she did not set out to write about a book about women as a counterpunch to history books that often only include the names of men. But that's what it became.

“I think it's a story about underdogs, frankly, who happen to be women,” Evans says. “For me what's more interesting is simply providing more complexity and more nuance to the stories of the technologies that have changed our world. And one way to do that is to tap into the amazing resource of all these extra people who were also in the room at that time and hear what they had to say about what it was like."

One of the women highlighted is Grace Hopper, a computer scientist and US Navy rear admiral who was one of the first programmers of the Harvard Mark I, a giant electromechanical computer that was used in the latter part of World War II. The Harvard Mark I spanned 51 feet in length, eight feet in height and eight feet in depth. When she first started working on the machine, she was instructed to create a manual for it.

“She was the best,” Evans says of Hopper. “Her name is not credited on that manual, by the way."

Evans says Hopper’s biggest legacy may be how she worked to improve accessibility for everyday people, not just programmers.

“When we think about the history of computers, we think of a sequence of machines. But really it's not the machines that change the world. It's the users,” Evans says. “And I think emphasizing the importance of use is something that we need to be doing — especially more and more now, as technologies really have an outsize effect on the disruption of communities and cities and entire workplaces and environments.”

Another trailblazer who features prominently in the book is Elizabeth Feinler, who often went by “Jake.” From 1972 to 1989, her group with the US Department of Defense managed the internet Host Naming Registry after having developed the first “yellow-” and “white-page” servers. Her group is credited with developing many domain name schemes, such as .com, .edu, .org, .gov and .net.

"She was the one person who knew where everything was. If you had a question about the internet, for 20 years, you called a phone number in her office, and she answered or one of her employees answered and told you how to have access to the thing you needed,” Evans says of Feinler. “It's pretty mind-blowing to think about."

While researching her book, Evans says she "lurked" in a early internet community known as EchoNYC, a female-centric bulletin board that has no graphical interface. It was founded in 1990 by Stacy Horn, an internet pioneer in her own right. And many of its members continue to post regularly.

“It's been around for so long. It's like this amazing time capsule," Evans says. "It contains thoughts and feelings and reactions to all these important historical moments and all these mundane things as well, and they all exist in the same sphere. And you can navigate it and you can sort of you can sort of be a ghost flying through the entire history of New York City."

Quickly after its founding, Echo devised a motto: “Echo has the highest percentage of women in cyberspace. And none of them will give you the time of day.”

“I wanted women viewed as how they really are, and they're not there for your entertainment and amusement,” Horn says. “They're there for their own reasons, so I wanted to have that attitude right from the start."

Horn remembers the early days of the internet, when investors would roll their eyes at the future she envisioned.

"They not only said no, they just looked at me with disdain and pity that I thought that communicating with other people over your computer was ever going to be a thing."

Still up and running, Echo has maintained one rule from day one: no anonymity.

“I felt people would be more careful and responsible about what they said if they knew that everyone was going to know who was saying it,” she says.

This article is based on an interview on PRI’s “Science Friday” with Ira Flatow.