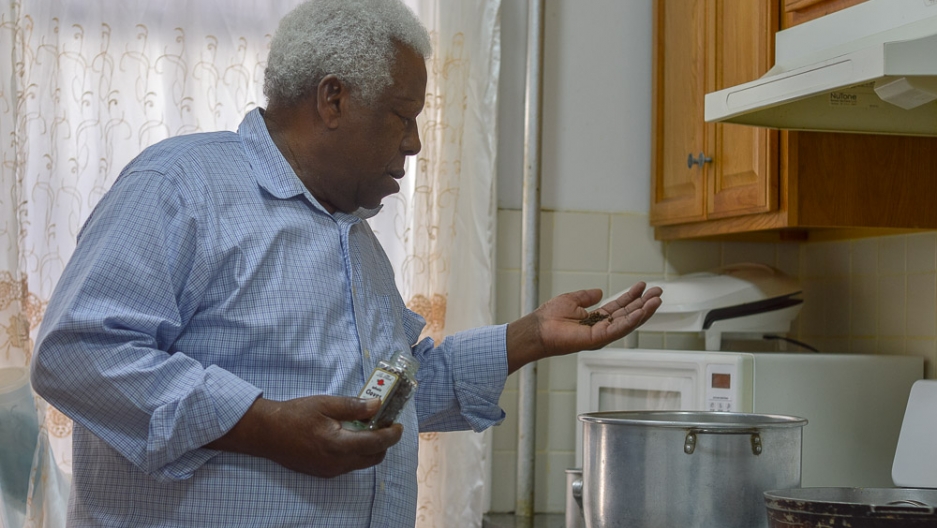 Adriano Manen Campusano makes habas con dulce at his home in New York City. He learned how to make the dish while growing up in the Dominican Republic.

The pot of lima beans, coconut milk, sugar and cinnamon simmering on the stove at my grandfather’s apartment signals two things: that it’s Holy Week, and that we will all sit down to a serving of habas con dulce, a Dominican stewed-bean dessert and one of my family’s favorites.

My grandfather, Adriano Manen Campusano, learned how to make the dish while growing up in the Dominican Republic, learning from his mother. Now, I am eager to learn from him.

We start with the lima beans simmering on the stove and the addition of cinnamon sticks and cloves. He shows me a critical test of the beans' softness — their readiness — by placing one on my palm and squeezing it. Next, we add different milks and nutmeg. Soon the sweet smell of cinnamon fills his home.

While we cook, I talk to my grandfather, who I call papí, about the dish. I have known it to encompasses the creativity of impoverished people who, for centuries, have used the fruits of the land to make desserts for holidays, hoping to indulge in the sweetness of life with what was available.

It also reminds him of his mom, my great grandmother. “Eloisa Pozo was a force,” he says. “She cooked so well. You licked your fingers.” She also held on to this particular dish for generations, even as the dictatorship of Rafael Trujillo in the 1930s forced them to move from Villa Altagracia, a small mountainous town an hour’s drive away from Santo Domingo, to another part of the country and, eventually, New York, with little savings.

Pozo would also mark Holy Week by dressing in white, with a white scarf covering her head and rosary beads around her neck. The large pot of habas con dulce would boil in her backyard for hours over an open flame, which she would fan with a piece of cardboard. My grandfather helped gather the ingredients, picking lima beans and sugarcane in the fields, milking the cows and heading to the market for vanilla, cinnamon, cloves and nutmeg. Now he buys his ingredients at the supermarket near his apartment in Brooklyn, the one that sells brands like Goya and La Flor.

In the Dominican Republic, my family would share the dessert with neighbors who, in exchange, gave their food, often a jar of honey or a basket of fruit from their backyards. 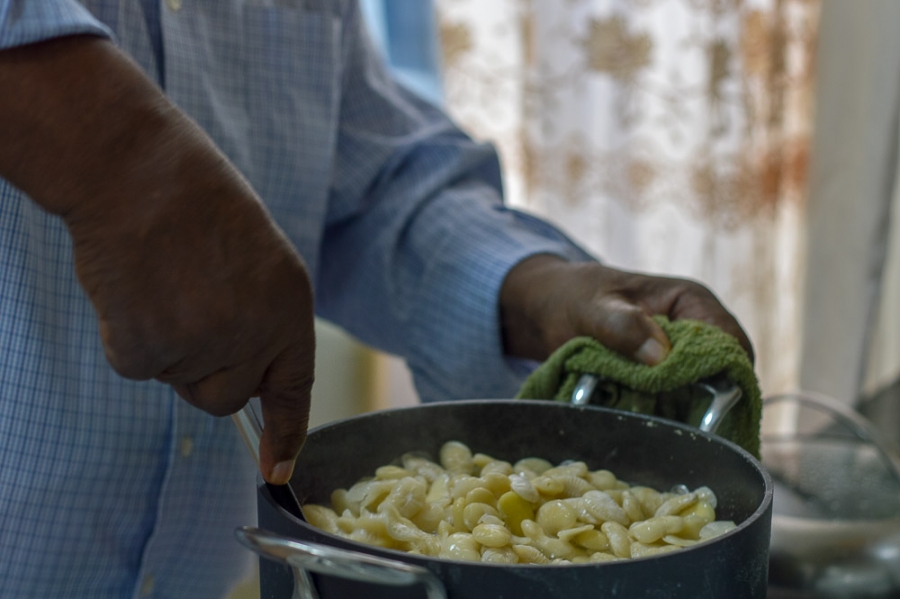 Today, though, the dessert is disappearing, overshadowed by other desserts. José Guerrero, a historian at the Universidad Autónoma de Santo Domingo, tells me that it is fading partly because of its association with lower-income people. “It’s a dish of the past,” he says

Back at my grandfather’s kitchen, the pot has now been on for five hours. The dessert is now a thick paste, and my relatives rush in to eat, grabbing some crispy cassava bread for dunking. As my grandfather ladles out a serving of habas con dulce, steam hits my face. I tell him that in the Good Fridays to come, I will be the safekeeper of this recipe.

1. Rinse lima beans under warm water for 2 to 3 minutes.
2. Put beans into a large, nonstick pot. Add cold water until ¾ of the pot is full.
3. Cook beans over medium heat. Add 4 cinnamon sticks and 1 tablespoon of whole clove.
4. Boil beans for about an hour and a half. Add an additional cup of water if the water is evaporating fast.
5. Every 30 minutes, remove a bean from the pot to test that they are softening by squeezing one on your palm.
6. Once the beans are soft, with an interior texture of a paste, add whole milk, evaporated milk and coconut milk. (If the water has not reduced by half, remove a cup of water before adding milks.)
7. Stir and lower the heat.
8. Add allspice, ground cinnamon, ground nutmeg, additional tablespoon of clove, and salt.
Stir again and simmer for 30 minutes on low heat, periodically stirring.
9. After 30 minutes, add sugar, vanilla extract and butter
10. Simmer for one hour, stirring every 6 to 10 minutes to make sure that the milk, sugar, and beans are not sticking to the bottom of the pot.
11. After one hour, taste mixture. You may add more sugar or spices.
12. Cook until you can dunk a spoon into the mixture and trace a line across the back of the spoon with your fingertip. If the line remains visible, the mixture is thick enough; if it doesn't, cook a bit longer.
13. Once the mixture is thick enough, turn off the heat and serve warm. Enjoy with cassava bread.

Hernandez's story comes to us with help from Feet in 2 Worlds, a project that brings the work of immigrant journalists to public radio and the web.