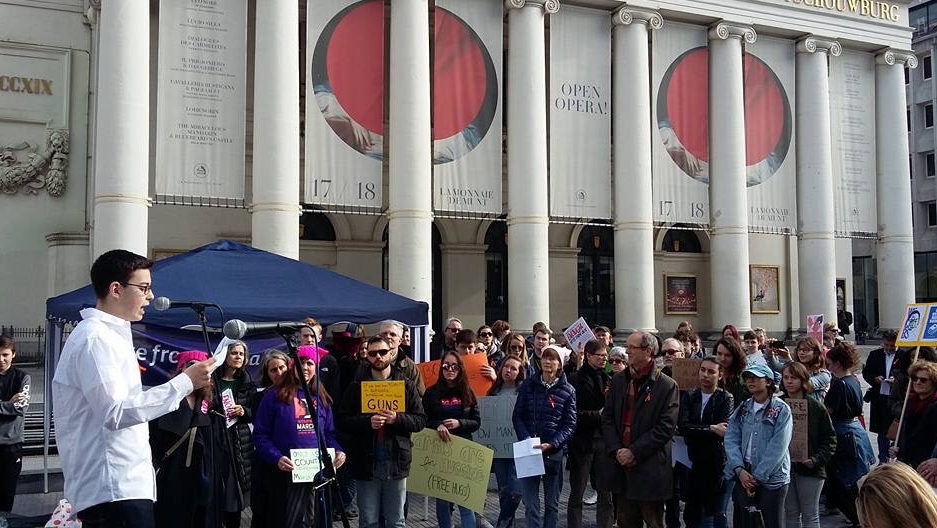 Miles Herszenhorn, 15, speaks to the crowd assembled in Brussels, at the March For Our Lives sibling march he helped organize. Herszenhorn lives in Belgium but was born in New York City.

After last month’s school shooting in Parkland, Florida, 16-year-old Sanchi Rohira couldn’t concentrate. She may have been physically present in Mumbai, her home of the past eight years, but her mind was back in the US, where she was born.

“People at my school would be up late studying, and I was up late watching Emma González’s speech and reading about gun control,” she says. (González, a Marjory Stoneman Douglas High School Student who also spoke at the rally in Washington, DC on Saturday, gave a speech on Feb. 17 that made headlines around the world.) “Everything that was happening felt so close to me, and I wanted to bring it to a place that’s literally close to me.” 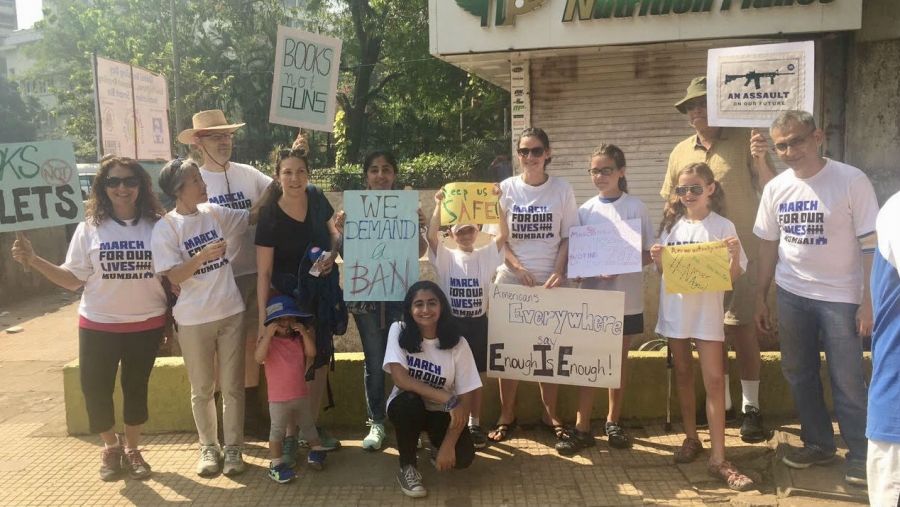 Sixteen-year-old Sanchi Rohira, kneeling, organized a march for 100 Americans and Indians in Mumbai.

And so, like thousands of teenagers and young adults across America, she got to work organizing a march in her city — nevermind that she’d never been to a march before, much less organized one. March for Our Lives Mumbai was born. On Sunday, she gave a speech before about 100 Indians and American expats on school shootings in the US and led a march up the Carter Road promenade, a popular walkway and park along the sea.

“I love America. But what’s happening, it’s ridiculous,” Rohira says. “Since I’m going to be applying for college in the US, I shouldn’t have to choose between doing what I want and being safe at the same time. So, on Sunday, I spoke on behalf of the Stoneman Douglas students, but also on behalf of my friends and family in the US, and a lot of my friends at school who want to go to college in the US. This is about protecting our futures as well.”

Thousands of miles away in Europe, Miles Herszenhorn, a 15-year-old New Yorker living in Brussels had the same idea. So did a group of young Americans in Paris. In Dublin, a group of Irish teenagers showed their support, too.

They are the American youths living abroad — joined by their non-American friends — who organized rallies, marches and voter-registration drives last weekend in solidarity with their counterparts in the US. More than 800 March for Our Lives “sibling marches” were held around the world, including every US state and every continent except Antarctica, according to a website by the event organizers. International events took place in London, Berlin, Dublin, Bogotá, São Paulo, Hong Kong, Tokyo, Reykjavík, Tel Aviv and elsewhere.

Some events were financially supported by local country chapters of Democrats Abroad, the official arm of the Democratic Party abroad, and other organizations for Americans living overseas. Others were grassroots efforts, organized by a few volunteers armed with posters and loudspeakers.

The young expats behind several of these marches say they’ve become ambassadors for the distinctly American problem of gun violence that they can hardly explain to their foreign friends. And sometimes, they say, it’s easier to see a problem for what it is when you’re on the outside.

That’s the case for 26-year-old Caitlin Waters from Northern Virginia, who has lived in Paris for the past three years. Waters co-chairs Democrats Abroad’s youth caucus in France, which provided logistical help for Saturday’s march across from the Eiffel Tower. A group of French students helped secure permits and a sound system.

“When you’re living abroad, you see that, well, everyone else is able to respond to a shooting with common-sense gun legislation. Why isn’t the US able to do that?” Waters says. “It’s frustrating. It’s like I’m a voice for my country, and I don’t have an answer for anyone.”

Herszenhorn, who has lived in Brussels for the past two years, has similar experiences while discussing gun control at school, where he is one of a handful of American students.

“It’s absurd. Talking with my classmates, talking with Belgians, when you describe how many Americans have guns and you see their astonished faces, it reminds you that this is not normal,” Herszenhorn says. “For them, owning firearms is like owning a grenade or something. It’s unthinkable.”

He has kept up with debates in the US over how to keep students safe from gun violence, including the push and pull over more guns versus fewer guns in schools.

American and French students rallied across from the Eiffel Tower in Paris.

“We talked about the proposal to have teachers carry guns in my English class,” he continues. “My teacher, who is British, interpreted it as schools would have guns locked away a cabinet somewhere for emergencies. But I had to explain to her that no, President Trump meant having teachers carry guns on their sides, while in their classrooms. The thought didn’t even enter her head.”

In the days after the Parkland shooting, Herszenhorn enlisted the help of friends to make posters during their school lunch hour and spread the word about the Brussels rally to other schools. He also got help from Democrats Abroad and Lights 4 Rights, an activist group in Brussels that organized the local Women’s March. More than 200 people turned out for Saturday’s rally in a central square in front of the city’s opera house.

“What really motivates us young Americans abroad — is not only do we feel for the survivors, and we’re shocked and sad, but we know from our experience abroad that it doesn’t have to be this way,” says John Grosser, a 19-year-old American in Dortmund, Germany, and youth leader for Democrats Abroad, who helped organize the event in Bonn.

Their rally, like others around the world, was centered around getting out the vote, Grosser explains.

“Americans abroad vote in every district in every state in the US. We are the margin of error in close elections,” he says. “If we can get Americans abroad to vote in 2018, that can give us that Congress that passes legislation we care about.”

Among those issues, he says, is ending gun-show loopholes and banning assault weapons and bump stocks. “Other countries have done it,” he says.

Some foreign students from other countries even came to Washington last weekend to join the march, which drew hundreds of thousands of people.

Twenty-year-old Rahman Chaudhry, the president of the School Student Union of Norway, a politically independent group that advocates behalf of the country’s students, flew in from Oslo with two other students to show their support. Norway’s teachers’ union paid for their trip.

“This thing — it blew up, in Norway as well. It was on everyone’s Facebook feed, everyone saw the videos, and we were inspired by it,” he says, cramming into the crowd of several hundreds of thousands of people gathered around the US Capitol early Saturday. “We felt sort of a fellowship with American students because we’re all in the same boat.”

The DC march was the largest youth protest in the city since Vietnam-era protests, the Associated Press reported.

Prior to the DC march, the Norwegian trio visited H-B Woodlawn alternative high school in Arlington, Virginia, to discuss strategies on youth empowerment and student organizing for change. They joined a group of 35 H-B Woodlawn students and parents at the march and held signs reading, “Nordic students call BS” — a nod to González’s rallying cry —  and “Let students be empowered.”

“That’s one of the fundamentals of not just educational policies but just having a good life, is that you’re entitled to feel safe at school,” Chaudhry says. “It’s not supposed to be that you’re going to school afraid that this day might be your last.”