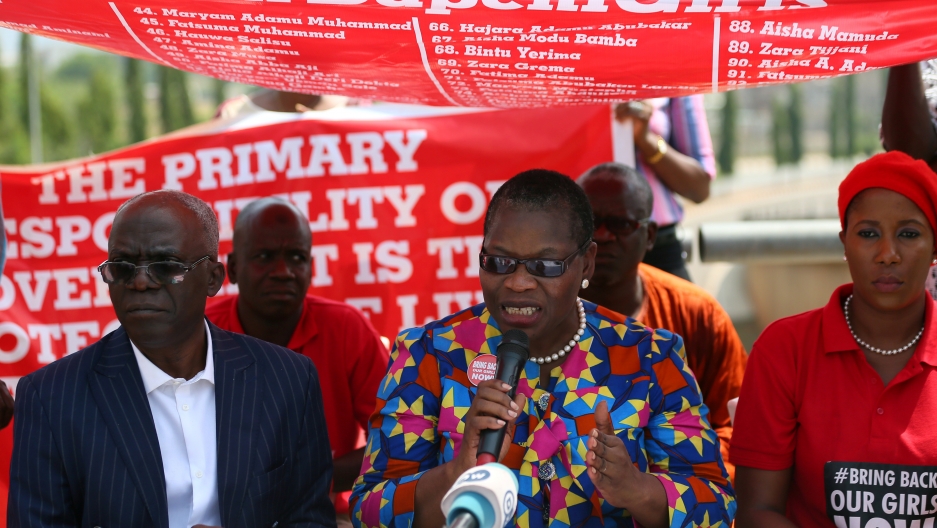 Oby Ezekwesili, Bring Back Our Girls campaigner, speaks during a news conference on the abducted Dapchi and Chibok girls in Abuja, Nigeria, March 13, 2018.

On hearing the news of a mass shooting at a high school in Parkland, Florida, some parents from the remote town of Chibok northeast Nigeria began planning a trip to Abuja, capital city of the country. Almost four years ago, on April 14, 2014, these parents lost more than 200 of their own children when the girls were kidnapped from a school dormitory in Chibok.

In the past 18 months, 107 girls have been rescued, found or freed through negotiations between the Nigerian government and Boko Haram. More than 100 girls remain missing. The parents of the kidnapped Chibok girls planned to show solidarity with those in the US, by staging their own protests at the Aso Villa residence of President Muhammadu Buhari, at parliament or at the US Embassy.

However, their plans were canceled after the news of yet another attack by Boko Haram on a school in Dapchi, in northeast Nigeria, during which 110 girls were kidnapped. Overwhelmed by the events in Dapchi, the Chibok parents changed their protests to March 24, to coincide with the "March for Our Lives" series of demonstrations in the US.

There are parallels in the issue of school safety in the US and in Nigeria. One set of students was attacked by a classmate, an enemy from within; another was attacked by a jihadist group with a name that loosely translates to "Western education is sin." But, in each case, children sent to school by their parents would not be returning home, their bright futures extinguished within the four walls of a school.

US President Donald Trump has suggested training teachers to carry guns at school. In Nigeria, parents are worried that armed teachers could present a whole new danger.

“Armed teachers could be as dangerous as having some crazy fellow running into the school with a blazing gun,” a mother in Maiduguri told the Associated Press.

Earlier this year, an appalling video emerged of a teacher flogging an entire class of children for missing the start of a new term at a Nigerian school. As the students writhed in pain on the floor, the man whipped the male and female teenagers across the back, legs, face and torso. Such scenes are not uncommon in government schools in the country. A friend of mine once went to police when her son was injured after being punished by a teacher for not paying attention.

Imagine what an armed teacher might do in a similar state of fury.

In response to the Parkland shootings, a number of school districts in the US increased police presence at schools. The debate in Nigeria tends to favor this strategy of armed personnel protecting every school in volatile regions like the country’s northeast. After the Chibok kidnappings, the Nigerian Safe Schools Initiative was launched by the government with the backing of the United Nations and the UK.

Former UK Prime Minister Gordon Brown told the News Agency of Nigeria, “You can make your schools safer by better fortifications, by better communications, by sending out a message that you’re protecting it.”

However, as someone who has travelled widely in Nigeria’s northeast, I know that if my country’s security agencies were to deploy personnel to every school across the region, there would be none left to fight and defeat Boko Haram.

The debate in the US has also touched on the incredible amount of publicity given by the media to the Parkland shooter and others who perpetrate mass shootings. They become household names overnight, their photos plastered on screens and homepages around the world, with major news organisations intimately describing their lifestyles and habits.

Writing for Vox, Jaclyn Schildkraut, an assistant professor in the department of public justice at State University of New York, said, “There are a number of problems with the intense media focus on mass shooting perpetrators. First, they are explicitly seeking fame, and the media is helping them to achieve this end. The realization that this route to fame ‘works’ can, in turn, produce more lethal events and foster one-upmanship among perpetrators.”

Boko Haram has figured out the best way to steal headlines and become the big story of the week in Nigeria. Their scores of attacks on soft targets have become so common that they hardly earn space in global media. By kidnapping another batch of schoolgirls, the group must have hoped to once again grab global attention as they did back in 2014, when a botched robbery ended with the decision to take the Chibok schoolgirls, an accidental kidnapping that turned out to be their biggest publicity scoop to date.

Those of us in Nigeria will definitely be closely watching the debates about school safety in the US. The US also may need to pay attention to our own debates. The two countries may very well have a thing or two to learn from each other’s horrific school attack experiences.